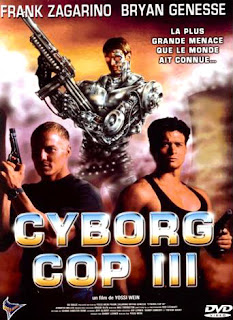 Released in the States under the gloriously generic title Terminal Impact, this has no connection whatsoever with Cyborg Cop I or II (except that, curiously, films II and III are both set in Iowa - all three were actually filmed in South Africa). There is a genealogy of sorts though as Joseph ‘Yossi’ Wein, cinematographer on the first two movies, steps up to the director’s chair for this one.

In place of David Bradley, we have Frank Zagarino (Project: Shadowchaser; whom I interviewed in 1998) and Bryan Genesse (Project: Shadowchaser II; whom I’ve never met) as Saint and Max, a couple of Federal Marshals. This means that, as with Parts I and II, not only are the cop(s) not cyborg(s), they aren’t even strictly cop(s)! They get mixed up with TV reporter Evelyn (Miller: Shark Attack) who has witnessed the unstoppable terror of the killer cyborgs created by evil businessman Sheen (Roberts: Cry, the Beloved Country) in nefarious experiments on unwitting students - although not as closely as her (late) cameraman.

She has stolen a vital part of the controlling computer, without which the cyborgs will cease to function in 28 hours so Sheen and his cybernetic goons are out to get her. Eschewing the openly robotic limbs of the previous films’ cyborgs, these ones have chips implanted in them and a sort of self-healing skin. It doesn’t actually make any sense whatsoever but it does mean that when our heroes give the bad guys a good kickboxing, they get up for more. And I guess that’s what’s important.

Zagarino and Genesse make a likable couple of heroes - the former plays Sensible Stickler for Rules, the latter is Loose Cannon with Eye for the Ladies. And Roberts steals the movie as the sort of well-bred psycho who was so missing from Part II. Wein’s direction is fine and the script is still a cut above the standard for KCMs (kickboxing cyborg movies). However, it must be said that, for the greater part of this movie, the cyborgs are merely a McGuffin to create a chase scenario. Only in the final battle in a convenient junkyard does their invulnerability become relevant.