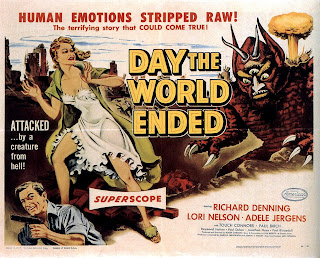 Having been impressed by the first three of DVD Ltd’s ‘Arkoff Film Library’ titles, I’m sorry to report that the final member of the launch quartet is distinctly inferior. Partly it’s just not as good a film. Corman’s movies have never had the sense of fun that characterised the work of Bert I Gordon or Herbert L Strock. There’s no cheese-factor, intentional or unintentional, in most of Corman’s work.

This is yer bog-standard Corman flick, with seven people left alive after a nuclear attack, surviving in a valley where the geography has somehow kept the clouds of radioactive death away. You’ve got Louise Maddison (Lori Nelson: Revenge of the Creature) and her father (Paul Birch: Not of This Earth, Queen of Outer Space, Beast with a Million Eyes) who have a house stocked with enough provisions for three people. But Louise’s boyfriend is not there and it looks like he didn’t make it to the valley in time (we see a photo of them together and, what do you know, he looks just like Roger Corman!).

Instead they find five strangers on their doorstep, starting with violent hoodlum Tony (Mike ‘Touch’ Connors: Voodoo Woman, and later star of TV series Mannix) and his stripper girlfriend Ruby (Adele Jergens: Abbott and Costello Meet the Invisible Man). Not that I’m suggesting that Corman recycles his ideas - but these are exactly the same characters played by Jerry Trimble and Jeannie Millar forty years later in Mind Breakers! Whatever happens when the world goes kaput, the survivors will include a thug and a stripper.

Next to turn up is handsome, kind Rick (Richard Denning: Creature from the Black Lagoon, Creature with the Atom Brain, The Black Scorpion) with an ill man he found on the hillside, Radek (Paul Dubov: The Atomic Submarine, Voodoo Woman, The She-Creature). Finally there’s old prospector Pete (Raymond Hatton, also in Invasion of the Saucer-Men and with a list of credits that goes back to 1912, including the Lon Chaney Hunchback and about 3,000 westerns!) with his mule Diabolo. 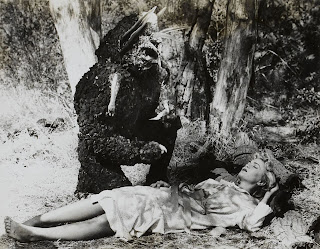 Pop Maddison is a reactionary old arse who wants the young couples to breed to preserve the species. Radek never touches food or water and goes wandering off every night up the hill, unaffected by the radioactive clouds. Rick and Tony have plenty of fisticuffs as Tony is constantly trying to get his hands on a gun. Meanwhile Pete is brewing up moonshine and Ruby is sashaying to swinging music.

It turns out that Maddison was an observer during the USA’s Pacific A-bomb tests and has sketches of some mutated animals that resulted, including a scaly three-eyed monkey. Sure enough, it turns out that there are surviving mutants over the hill and we eventually get to see one. It’s a Paul Blaisdell creation which is the goofiest-looking damn thing you ever saw, with a conical head, three eyes, long pointy ears, wobbly horns and little vestigial extra arms sticking out of its shoulders.

What is never made explicit - possibly because Corman wanted to be subtle but more likely because he couldn’t be bothered - is that this may actually be Louise’s missing boyfriend. She feels some connection to it and heard it call her name ... but that thread is never followed up.

Corman regular Jonathan Haze (The Terror, Little Shop of Horrors) plays a nearly dead man in one scene and the book-ending narration is by NBC’s Chet Huntley (as in ‘Brinkley and...’). Lou Rusoff also wrote It Conquered the World (for Corman) and The She-Creature. Cinematographer J Arthur Feindel had actually been a cameraman on Supernatural and White Zombie!

The other three titles released along with this - How to Make a Monster, Earth Vs The Spider and War of the Colossal Beast - were nice, crisp, clean prints but Day the World Ended is a television print which is noticeably soft and even grainy in places. It’s not as knocked about as the nine trailers on each of the discs (the trailer for this film has the on-screen title The ‘Day the World Ended’) but there’s a lot of distracting scratches visible throughout. Also a few transfer glitches and, about seventeen minutes in, a startling bit of gate-float when the whole picture shakes. 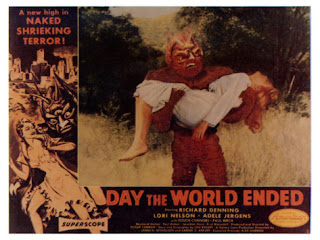 Like the other titles, this is a full-frame transfer. Whereas that didn’t matter so much on Spider, Beast and Monster, Day the World Ended was shot in ‘Superscope’ and indeed the opening titles and the closing shot (which says ‘The Beginning’ and to be fair, that wasn’t a cliche in 1956) are letterboxed. Not only is a lot of the picture missing, but the print hasn’t even been panned and scanned - we just get the middle of the picture. So characters are frequently off-screen, even when they’re speaking. There’s one scene of the two women in their bedroom when all we see of either is an arm and a shoulder!

Given the quality of the other films on offer and the effort that DVD has put into these releases - the Sam Arkoff audio interview and the postcards are still here - I’m surprised they’ve let themselves down with this one. My only consolation is that at least Day the World Ended was a pretty crappy film to start with.

review originally posted before November 2004
Posted by MJ Simpson at 14:36