The blurb on this screener VHS offered little clue as to what was inside. I was familiar with Ron Ford's name but not his work and, bearing in mind the evident limited budget and indie nature of the film, I was expecting a generic serial killer picture. What I found instead was a movie which was well-scripted, well-directed and enormous fun, with two smashing central performances and a wicked streak of black humour.

Randal Malone (Hollywood Mortuary, Evil in the Bayou) stars as author Lucas Swan whose fame rests on a single book, a first person novel based on the true story of a local serial killer who was never caught. Swan runs a guest house in Craven Cove, a small town boasting an unhealthy reputation for serial killings. One day, when the B&B is closed because it's the 'dead season', into his life comes Jennifer, an obsessed fan (stage actress Trish Haight making her screen debut). 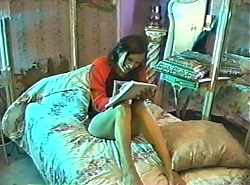 Swan is a tubby, slightly camp character, the illegitimate offspring of Barbara Cartland and James Herbert, living in a house furnished in the style of early kitsch, and he has no intention of ever writing another book. Jennifer, who has struck up an anonymous relationship with him on-line as 'Seagull', is determined that he will write again and inveigles herself into the house.

Malone and Haight (who also narrates as she writes her diary) both give their all in roles that they can really get their teeth into, keeping the two slightly larger than life characters from getting out of hand by playing the essentially daft situation completely straight. The dialogue is a little mannered, the action slightly stiff - but that's precisely what a story like this needs and the restraint is admirable. It would be very easy for the actors or director to tip the whole thing over into silliness with a knowing wink and ruin it all.

Swan is convinced that the killer on whom he based his story was a onetime guest at his B&B, Sam Risher, although the police were not interested when he told them. When Risher returns - Jennifer signs him in without knowing who he is - the killings start again and Swan's learning-impaired gardener Clay is arrested. Risher is played with suitable non-blinking creepiness by Ted Newsom, best-known as producer of documentaries such as Flesh and Blood: The Hammer Heritage of Horror and Ed Wood: Look Back in Angora and director of The Naked Monster. Clay is played by the director/writer/producer himself. 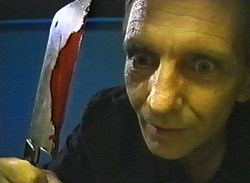 I was a little surprised that the murderer's identity is revealed from the start - we see Risher smash a meat cleaver into a woman's head - when, from the audience point of view, Jennifer and Swan are both possible suspects. But the situation complicates soon after when Swan sees Risher committing the next murder but is tricked into being photographed holding the bloody machete over the body. All is not as it seems however, because when Jennifer keeps a watch on Risher's comings and goings she sees him arrive at the house twice, wearing different shirts. With Swan overhearing their guest 'talking to himself' it's not too difficult to fathom what is going on.

However, about twenty minutes from the end Dead Season turns from a darkly comic murder thriller into something more psychological as Swan starts to see Risher, even though he is dead. There's a hint in one scene that this may be supernatural rather than psychological and this is never discounted or followed up, which leaves the audience to decide. It's the sort of open-ended plot point that many indie film-makers would have tidied up with some pat explanation one way or the other but Ford wisely leaves us to debate the matter.

I thoroughly enjoyed Dead Season. Ford and his crew do their best with the limitations of shot-on-video and there is actually some nice camera-work here (by Jeff Leroy: Demonicus, Witchcraft XII), as well as clear sound and taut editting (by Julie Lucas: The Halfway House, The Possessed). The movie runs just over 100 minutes but never feels stretched or padded. 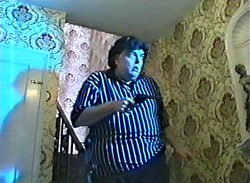 Veteran actress Margaret O'Brien has a brief but important role at the end as a bookstore patron; this is her second film with Ford (after Hollywood Mortuary) and it's a long way from Meet Me in St Louis! Director Jeff Burr (Pumpkinhead II, Puppetmaster 4 and 5, The Werewolf Reborn) and Joe Estevez (Deathbed, Hell Asylum) also make 'guest star' appearances; the former as one of several drivers with whom Jennifer hitches a ride in a sequence which nicely sets up her character; the latter as the instigator of a brutal revenge beating on the hapless Clay.