My namesake MJ Dixon kindly answered some questions about his film Slasher House in March 2013.

What was the inspiration/idea behind Slasher House?
“Slasher House was an almost direct reaction to Freddy vs Jason, I loved the idea of those kind of iconic, over the top serial killers clashing, but ultimately I was disappointed in the film. I started just thinking about what I would have done differently, but it wasn't till I watched Saw 2 a few years later that the whole thing really came together and from there the whole thing really wrote itself. It was the easiest script I've ever written.

“I just loved the idea of a house full of serial killers and one victim and that was kind of the crux of the whole thing. It left me with some difficult problems to overcome in terms of body count etc., but eventually I found a way to try and get around that for the most part via flashbacks etc., which came in much later in the production.”

Why did you choose the red/green aesthetic and how did you achieve it?
“The look of the film really comes from my love of Dario Argento movies as a teenager. I always loved his colours, they always gave his films an almost comic book quality. If you’re ever unlucky enough to see my first short film Destination you can see that creeping in there. 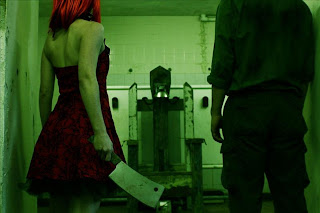 “But the main reason is that I have always been conscious of colour in everything I do. I started out as an artist with a love of comic books, so with everything I work on I have always limited my colour palette to give it its own unique place in my work. It was a gamble to go with something so over the top, but it seems to have paid off in many ways as it’s the first thing most people point out that they like about the film.

“It wasn't anything fancy to achieve it. I just applied a graphic design approach to some basic grading and I got the look that I first conceived in storyboarding. I wanted the film to look like the storyboards and eventually with a bit of experimenting was able to achieve that.”

How did you select your cast and crew?
“Most people I had worked with before on various other projects. Our lead, Eleanor James, heard about it and asked if she could read the script. I'd been a fan of her for some time and got really excited about working with her. But we still auditioned a dozen girls; it was after that I realised it was still Eleanor that I wanted for the role. But for the most part, I already had people in mind when I was redrafting it.” 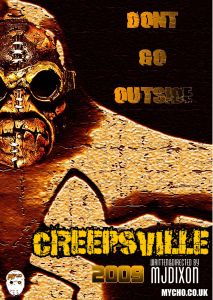 Why do you think Slasher House has been picked up for distribution but your first feature Creepsville hasn't?
“I guess that would be because Creepsville still isn't complete. Creepsville was definitely an exercise in how to take the scenic route when making a movie. It happened before the SLR revolution so we had to take long, time-consuming approaches to lighting and shooting - along with cast dropping out last minute, recasting, reshooting, lost tapes and then losing core members of the post-production team half way through the edit, twice. It has been an uphill struggle from beginning to end. It’s a couple of months away from being locked off and done. Mostly because I did a lot of the post work, such as grading and stuff, myself between jobs.

“In some ways it’s maybe a stronger film than Slasher House, but it’s hard to really say at this point as I'm so close to both of them. It’s definitely more subtle, which I like about it. I'm not sure what we'll do with it once it’s done, but as this point maybe remake it a la Evil Dead 2.”

What was the hardest part of making this film, and what was the most satisfying/enjoyable?
“The hardest part for me is always the writing, trying to get it right. Slasher House is tough in that respect because it is the centre point for a much bigger story. So I went in knowing that it was going to come across ambiguous and all the way through was just hoping I could make a movie that would be entertaining enough to make people wonder about what comes next. That kind of pressure to put on yourself is the worst part. That and the horrendous muscle pain from editing 20 hours a day.

“The most satisfying moment, is knowing that out there somewhere you have inspired someone to go out and do what you did, which is just going out and making a movie, without any comprehension that you can't do it. People get bogged down with the way things are supposed to be done, I'm more of a firm believer in just getting them done however I can. It’s nice to know that I've passed that message on to several people already without the film even being released yet.” 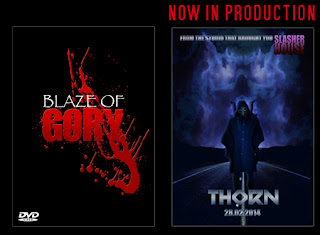 What is the latest news on Blaze of Gory and Thorn?
“Blaze is gearing up for shooting end of March/early April. It’s a tough one as it’s quite a graphic piece and if it’s not handled right it could mean a whole lot of shit for all of us. But it’s a challenge and anyone who knows me knows I like to push myself.

“Thorn is in pre-production at this very moment, we're launching a crowd-funding campaign next week and shooting come June/July. The film ties directly into Slasher House (along with another movie we have in pre-production currently), but is also very much a stand-alone story about the character. It's one huge love letter to Halloween that winks and nods at John Carpenter’s classic and its imitators at every turn.”