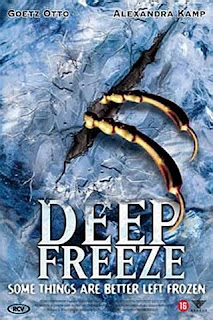 How many Antarctic horror movies can you name? Howard Hawks’ The Thing, John Carpenter’s remake of, um, The Thing, and Dan Berk’s Frozen aka Sometimes They Come Back for More. And now let’s add to that list Deep Freeze, the latest movie - as both director and producer - by effects legend John Carl Buechler.

A company called Geotech has set up a big base on the Antarctic ice shelf to drill for oil. Staffing this base, which extends down at least eight storeys, are sultry Dr Monica Kelsey (Alexandra Kamp-Goreneveld, credited as Alexandra Kamp: Sumuru, Dracula 3000), pill-popping Schneider (Goetz Otto: Tomorrow Never Dies) and six workers, including two called - in a possible Simpsons homage - Lenny and Carl.

There’s a storm raging but a small helicopter carrying seven people and their luggage (which must be a squeeze!) heads out to the base because an even worse storm is waiting in the wings. This is a ‘research team’ employed by Geotech to study what’s going on (including what’s causing frequent tremors) before a United Nations team arrives in six weeks to possibly shut the base down.

Team leader Professor Ted Jacobson (David Millbern: Slumber Party Massacre, Sanctimony, Amanda and the Alien) is romantically linked with Dr Kelsey. With him are four postgrads: studious, environmentally concerned Arianna (Karen Nieci), UCLA football star Tom (Howard Halcomb) who is really there to make out with his party-loving girlfriend Kate (Rebekah Ryan, who had a bit part in The Brotherhood) and black computer geek Update (David Lenneman). Stetson-wearing Curtis (Allen Lee Haff: Altered Species) is also young but he’s there because his dad is a legendary oil-driller. Making up the numbers is the chopper pilot (Tunde Babalola).

We’ve already seen Lenny (Robert Axelrod, voice-actor in Power Rangers and the English dub of Zeram) get killed in the prologue. Right down at the lowest level is a large, circular pool of icy water, apparently connected to the outside in some way and called (for no reason that’s ever explained) the Moon Pool. Something is in there and when Lenny falls in - he’s a goner.

Carl and Lippski have also disappeared - possibly for a crafty drink but really, what do you think, viewers? - which leaves Dean Munson (Norman Cole), Clyde Strickland (Billy Maddox: Spiders, Dark Breed, Life Among the Cannibals) and Jack Krieger (Brad Sergi who was in Yonggary!).

Kelsey and Jacobson are up to something, but Kelsey isn’t going to tell us because she rapidly falls prey to a nasty black beastie. It took twenty minutes to appear (albeit for about a quarter of a second, but that’s what DVD freeze-frame is for) but it wouldn’t be a John Carl Buechler movie without a deadly rubber monster puppet. Kelsey, incidentally, gets attacked after taking a nice relaxing soak in the black whirlpool bath with which her large, comfortable, private living quarters is equipped.

One by one, the rest get picked off by the monster, of which we are shown a little more each time. It looks for all the world like a very large trilobite and, wouldn’t you know it, that’s what it turns out to be! Well, now I’ve seen everything. Giant snakes, yes; giant ants, fair enough; giant mosquitos, why not?; giant octopi, no problem; giant spiders, bring them on. But a giant pre-Cambrian trilobite? Words fail me...

Of course, it has to be considerably more deadly and carnivorous than trilobites are believed to have been. 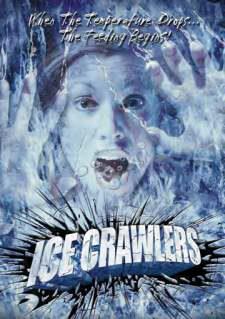 Who will survive and what will become of them (to coin a phrase)? Well, it won’t be Tom and Kate because they’re young kids having sex, though their tryst does lead to an excellent and deeply gross prosthetic effects shot. There’s also a great scene of the trilobite chasing one character into a lift. But to be honest those are the highlights in what is otherwise your standard Monster on the Loose in a Confined Space movie.

Schneider provides a red herring, for the characters if not for the audience. The biggest bit of misdirection for the viewers is during the autopsy on Lenny’s body, when Robert Axelrod clearly blinks! Since the cause of the deaths/disappearances hasn’t been determined by then, I was expecting him to suddenly sit up on the medical bay table...

Without wishing to spoil the plot, the finale sees an even bigger and more deadly threat, which gets blown up, as is traditional. In an acknowledgement of how copperplate the ending is, one character actually screams, “I guess you haven’t seen the end of Jaws, you bastard!” The whole base goes up in a series of enormous explosions and fireballs - except apparently for the particular corridor that the ultimate survivor(s) is/are in. (Look, I’m trying to keep some suspense here.)

Shot in Germany in 2001 (Schneider and Kelsey speak subtitled German for a couple of lines in their opening scene), Deep Freeze was written by Robert Boris (Steel Justice), Dennis Pratt (Kickboxer 3, Leprechaun 4) and, interestingly, Matthew Jason Walsh (The Sandman, Bloodletting, Witchouse I and III, Ancient Evil: Scream of the Mummy; he also did some effects work on Werewolf Reborn and some soundtrack work on Vengeance of the Dead) from an original story by Boris. But three credited writers doesn’t necessarily make for a good script and this one’s a clunker, full of lines like, “Our highest priority is getting those samples back to the mainland and covering our collective tracks.” and, “The gear’s pretty complex but I guess anybody could operate it in a pinch.” and “A trilobite. It’s like a cross between a worm and a mosquito. A parasite. There’s no other explanation.”

‘Special make-up and creature effects’ are unsurprisingly credited to Buechler’s own Magical Media Industries, while ‘special effects’ are by Ultimate Effects. To be fair, the trilobite is a well-done effect, especially when seen scuttling across the floor. It’s just such a dopy concept for a monster! The scariest part of the film is when Munson takes a shower because Norman Cole is the hairiest man I have ever seen! His chest, back, arms and shoulders are covered in what comes perilously close to being fur. Is this for real, or is it JCB and his make-up effects crew at work again?

Where Deep Freeze really falls down is in the production design. The GEO-1 base just doesn’t look lived in. A few nudie pictures pasted on the wall of the men’s dormitory and a couple of notes stuck on the fridge do not give the impression that half a dozen or more people have been living there in isolation for many months. Everything in every room looks like it has been carefully positioned by a set-dresser rather than just being a naturally developing arrangement of stuff. Nothing looks like it has just been left somewhere until someone gets round to putting it away.

Also disappointing is the sloppiness of the credits. The actor playing Tom is ‘Howard Halcomb’ in the opening credits but ‘Howard Holcomb’ at the end. Even stranger is that Brad Sergi is sixth-billed in the opening credits but not mentioned at all in the closing ones! And Otto’s character, called ‘Schneider’ all the way through the movie, is listed as ‘Nelson’ in the credit roll...

This lack of attention to detail continues on the sleeve, with cheapie label Prism Leisure managing to misspell Geotech as ‘Geotek,’ cinematographer Tom Calloway (Doll Graveyard) as ‘Tom Galloway’, and poor old Howard Whatever gets a third variant of his name as he’s now called ‘Halcom’! In addition, writers Robert Boris and Dennis A Pratt are credited as ‘Bob Boris’ and ‘Dennis Pratt’, apparently because otherwise the final line of the credits block would be slightly too long and the whole thing would have to come down a pointsize. 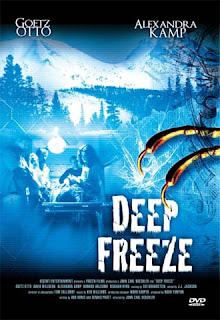 Prism’s disk has a generous 18 chapters, properly labelled, and a gallery of 13 'stills' which are (a) only shown in a tiny frame taking up less than a quarter of the screen, and (b) all just portraits of the cast. The sound on my disc was awful and made some of the German accents hard to understand; I’ve no idea whether that’s a duff disc, a transfer fault or a dodgy master.

Deep Freeze (which was retitled Ice Crawlers for the USA) is okay if all you want is 80 minutes of by-the-book monster movie. It’s got a few thrills, a few unintentional laughs and a bunch of exterior stock footage from The Thing, but there’s a certain amount of depth to the characters and there are no wannabe scream queens in the cast, which is a blessing. And for five quid, you can’t really complain.