The Death of Poe 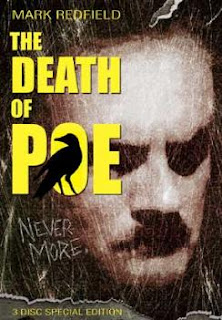 There is a reason why this film is not subtitled ‘A gay romp with Edgar and Ginny’. The Death of Poe is a dark film, sometimes intense, often morose. It’s an hour and a half of a slightly bonkers bloke dying slowly in black and white. Not a great date movie. But it is also a remarkable artistic achievement and, as one erudite critic (quoted on the DVD sleeve) observed, “a fascinating, hallucinatory journey into the mind of the author who invented the modern horror story.”

The title is not metaphorical or obtuse: this is a film about Poe’s death, not his life. As most viewers won’t have read a biography of Poe recently, the film cleverly skims through the major points of his life in italic captions which float across the opening credits. Pay attention to these because they tell you things you will need to know, like Poe’s child bride having died and his having enrolled in the army under a different name.

This is a defiantly non-narrative film, jumping backwards and forwards in time, without a clear narrator; Poe himself can’t be relied on as our point of focus because he consistently finds himself doing things that he has already done (as in a series of nicely played scenes with his landlady and her son). In any case, Poe is unconscious in bed for most of the third act, which unfortunately gives the film an unbalanced air as the audience must start sifting through a new group of characters most of whom we have not previously met. 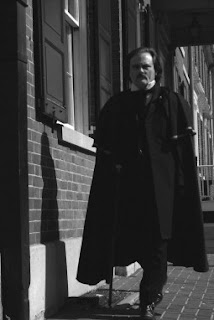 It’s not all doom and gloom. A triptych of vignettes in the first act see Poe trying to drum up investment for his proposed new journal, The Stylus, from three wealthy Baltimoreans, all of whom prove unsuitable in different ways. These scenes are wonderfully underplayed for dry comedy, and the aforementioned landlady and son provide some wry humour in their tolerance of Poe’s eccentricity.

But by the midpoint, such lightness is jettisoned. Poe encounters an old army buddy, is beaten and kidnapped and ends up in a hospital bed where he lies for a week before pegging it - though this makes the plot seem far more more linear than it is. What holds the film together is a stunning performance by Mark Redfield (aided by make-up, hair and costume which completely transforms him into the very recognisable author). Other cast members are all good, though some play their parts naturally and others go for a more stilted, mannered approach. Notable among the players are Kevin G Shinnick (Flesh for the Beast, Screaming Dead and a contributor to Scarlet Street magazine) as the doctor who treats Poe and Jennifer Rouse (also credited as composer and associate producer) as the doctor’s wife. Cinematographer Jeff Herberger, shooting mostly in black and white, does a terrific job and kudos also to editors Sean Paul Murphy and Jay Carroll for excellent work on what must have been a difficult job.

But I won’t mislead you: The Death of Poe is a difficult film to follow and understand. Despite the helpful précis of Poe’s life at the start of the film, we’re left to find out about his death from the movie itself, if we can. Most viewers will, I suspect, come to this film with little knowledge of the mystery surrounding Poe’s final days beyond what they can glean from the few sentences on the DVD sleeve and a one-page insert. Consequently significant parts of the story which, once known, can be spotted among the drifting, dreamlike miasma of images and ideas on screen, are likely to go unnoticed (or, if noticed, will be meaningless). 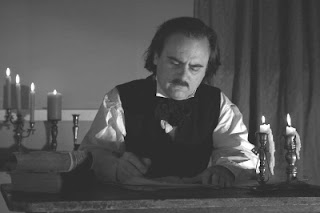 There are, apparently, more than twenty theories as to what happened to Poe. The one that Redfield uses here is that Poe was roughly rounded up with other drunks and misfortunates as part of an election day fiddle. Thrown into a cellar, those with decent clothes were dragged to the ballot box and made to vote - for whoever - and then they exchanged clothes back in the cellar with the tramps in rags so that they too could pass as Baltimore citizens doing their democratic duty. This explains why, when Poe was found wandering the streets, he was wearing tattered clothes which conspicuously weren’t his own.

But who, apart from Poe biographers and fanboys, knew that he was discovered in another fellow’s trousers and coat? Or that he disappeared on election day? Or indeed that such underhand practices went on in 19th century America? Not me. Similarly, the identity of the journalist Griswold whose dictation of Poe’s obituary provides bookends to the story was a mystery to me until I looked up the character’s name on the net and found he was actually a significant opponent of Poe.

Maybe these sort of details are better known in the USA, maybe they’re common currency in Baltimore itself, but I fear that Mark Redfield has spent so long immersed in the minutiae of Poe’s demise that somewhere along the way he lost sight of what the average horror fan knows about the man, which is basically: high forehead, trim moustache, gloomy bloke, drank too much, died too young, wrote ‘The Raven’, ‘The Premature Burial’ etc. etc. As a biographer myself, I know the situation. You think: well, everyone knows he was X but I’ve discovered he did Y, which is fascinating. And then you find the punters and/or critics writing: wow, according to this book/film, he was X (and completely ignoring Y because it means little without a knowledge so specialised that you could have written the book/script yourself anyway). One must always remember that one's audience want to find out about one's subject precisely because they don't know much about him.

So I strongly recommend boning up on Poe before watching this film, at least as far as Wikipedia or a quick Google. The story will start to make a lot more sense. You can glean a little of Poe’s life and times from The Haunting of Poe House, a ‘featurette’ on the DVD which turns out to be an episode of Creepy Canada, a sort of ‘Most Haunted’-type TV show. The first half of this is a potted biography of Poe and his connection with Baltimore, illustrated with clips from Redfield’s movie but you can turn off halfway through as the second part is a bunch of looney tunes wandering around a graveyard claiming they’re picking up spirits on their multimeters. (Picked up some spirits in a bar more like.)

Poe’s Baltimore is a three-minute travelogue through the city’s history, breathlessly narrated by Mark Redfield while The Making of The Death of Poe is a twenty-minute interview with Mark intercut with clips from the film and occasional behind-the-scenes shots. There’s some mention of the project’s origins but much of this is taken up with discussing cast and crew.

It seems churlish to criticise the extras on a package which runs to three discs and retails for a kibblesworth under ten bucks but a carefully constructed independent movie such as this, a real artistic and technical achievement, surely deserves a proper Making Of documentary, or at least a film-maker’s commentary. The package also include two silent Poe films - The Avenging Conscience and The Raven, with music by Jennifer Rouse - plus a 74-minute audio disc of Mark Redfield reading stories and poems by Poe.

The Death of Poe is an impressive and imaginative piece of independent film-making, available at a ridiculously low price and thoroughly worth the time, effort and cash of anyone who has ever enjoyed reading (or watching films based on) the words of Edgar Allan Poe. But it is a film that makes you work. Unless you know the Eddie Poe story well, you really need to read up on him, not in depth, but at least make a trip to Wikipedia. That still won’t make this an easy film to watch and understand but it will make it considerably easier to appreciate - and that’s something that is very worth doing.