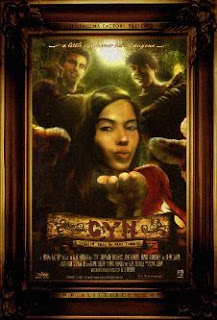 The latest short from Alex Ferrari, director of the justifiably highly acclaimed Broken, runs a mere five and a half minutes, including 25 seconds of opening titles and a Bond-esque two-minute credit sequence, leaving only three minutes of actual story. Despite this brief running time, the film has a 38-second trailer. This makes me smile: who has enough time to watch the trailer but not the film?

Anyway, as one expects from Alex, Cyn is desperately stylish and enormously professional. Basically, two gangsters have to guard a female prisoner, who turns the tables on them. That’s, well, that’s about it unless you want a shot-by-shot description.

Cyn looks super thanks to the excellent work of cinematographer Egon Stephan Jr (who will probably never have a cooler credit in my eyes than Second Assistant Camera on Revenge of the Nerds II). Unfortunately the sound’s not so great and I found some of the dialogue hard to hear. And I’m not convinced about the practicalities of what happens right at the end - whether one could do it and whether one could survive doing it - but this is a slightly stylised world so I’ll let it ride.

What is frustrating is the brevity of Cyn. It’s just a moment in time and there is so much more possibility. The situation could have leant itself to a good ten or fifteen minutes of tension as the gangsters - and the audience - question the girl’s motives, words and actions. Cyn is simply over too fast.

Not that there is a lot that Alex could have done about this, as Cyn was the result of reaching the top 100 in the TV show On the Lot, which seems to be a sort of Spielberg-backed Pop Idol for film-makers. Alex and chums were given just six days to make the film and, very impressively, brought it in on schedule for under a thousand bucks.

As usual, Alex Ferrari has gone overboard on behind-the-scenes stuff, not out of self-indulgence but in a genuine effort to help other film-makers. There is a lot of information about Cyn on the movie’s packed website including the fact that it is derived from Alex’s feature-length script Red Princess Blues.

For what it is, Cyn is top-notch, but it’s just a tease, a taster that makes me want to see Alex Ferrari go to town on something with real depth.