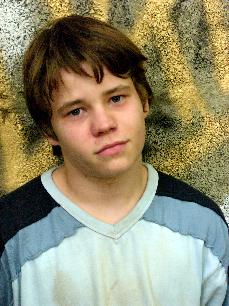 What sort of character is Mugsy?
"He’s a wimp. He gets pushed over by everyone really. He gets bullied, he’s a scaredy-cat, I guess. And he’s really like laid back. I want to protect Leanne, which is Amy, but I can’t because I’m a wuss."

How old are you and how old is Mugsy?
"I’m fourteen and Mugsy is thirteen."

How did you get this role?
"First I went for an audition where everyone went. We had a few scenes there. Then people went for separate auditions but I couldn’t go because I was away. So then they made another audition for me, Jon and my brother who’s playing Ben. I went and got it, then I realised I’d got the part of Mugsy."

What acting have you done before?
"I’ve done a lot of acting. Casualty, Doctor Who a few times. A new series that’s coming out, Torchwood, about Captain Jack off Doctor Who."

What can you tell me about Torchwood?
"In Doctor Who, one of the last episodes, they go to a place called Torchwood, don’t they. It’s a bit like that, they’ve named it after that. I’m not really a big part in it but I’ve got a couple of lines. I’ve been on Crusade in Jeans, Welsh programmes, Welsh adverts. I was the main character in a Casualty episode."

How long have you been acting?
"Four years."

And is it something you want to make a career out of?
"Yes, definitely."