When Network DVD released a stunning two-disc special edition of Things to Come in May 2007, I took the opportunity to interview Nick Cooper, the fan whose contributions to the release include providing the booklet text and commentary. 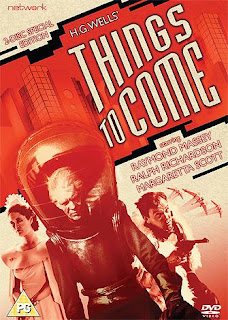 When did you first see Things to Come and what did you think of it?
“I first became aware of it in 1979, via a retrospective review in an early issue of Starburst. I kept an eye open for TV screenings, but there weren't any until BBC2 included it in a ‘Korda Classics’ season in 1986. I didn't have a VCR at the time, so got a friend to record it for me. When my own VCR was delivered a week or two later, I watched the film two or three times the same day. By then I was heavily into HG Wells in general, and I immediately knew that something was amiss, partly because the BBC2 print clocked in at the equivalent of 92m 42s, while most film guides quoted 113m (and even a rough-cut of 130m), and partly because I'd seen photographs from scenes that weren't in the broadcast. That was really how my interest proper began, in wanting to know more about what was missing and why.”

When, how and why did you become seriously interested in the film (enough to be considered something of an expert on it)?
“Shortly after the BBC2 broadcast I got a copy of Wells' published ‘Film Story’ - essentially the early/mid-1935 shooting script. I planned to do an article on the differences between it and the surviving footage for the media fanzine I co-edited at the time, but unfortunately I left the book and all my notes on a bus!

“Over the years I retained an interest in the film, but it wasn't until 2001 that it was rekindled when I finally got a copy of Leon Stover's The Prophetic Soul, an academic book on the film that reprinted the only known production script, a continuity/editing guide for a (I eventually worked out) 104m 13s version. Not long after that, I was introduced by my flatmate (and now fiancée!) to the temptations of eBay. Knowing there were public domain prints floating around in the US with a few ‘extra bits’, I thought I'd see if it applied to any of the many American VHS releases, and the first one came up trumps, although it was a pretty grotty copy. 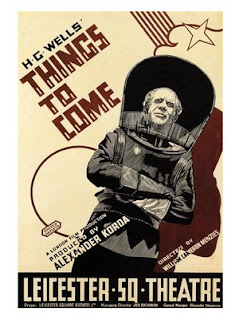 “As well as trying to find a better version, I began actively collecting other items related to the film, primarily original publicity photographs, especially those from missing scenes. Most of this ended up on my webpage on the film. I also started investigating the general background to the production via various Korda biographies; most of the Wells ones I already had.

"'Expert' is a label I'd not previously applied to myself, but I would say that the point where it could really be used is when I came to the realisation that quite a few of the accepted ‘facts’ about the production were actually quite false, while at the same time being able to offer new perspectives that didn't appear to have occurred to anyone else previously. There really are quite a lot of myths about the film that aren't really supported by the facts, such as Wells' supposed ‘continual’ presence on set, when he was actually out of the country for about three out of the 10(?) months of active production.”

What has your involvement been with the Network DVD and how did that come about?
“In early 2006 another UK company did a mail-order only DVD release, which was just the bare-bones 92m 42s print, along with a competent but workmanlike booklet on the production. I posted a bit of a whinge on an internet forum, saying that it was a wasted opportunity, not least because they'd either not known about - or hadn't tried to obtain - the extra segments I'd identified a few years previously and which by then the BFI had. These, at least, would take the running time up to the 1936 American 96m 24s release.

“Luckily, Steve Rogers at Network saw this and got in touch, saying that they had the rights to do a retail release, and would I like to act as consultant on it and write their booklet. Quite early on the idea came up of including a stills gallery, adding my own collection to the ones Granada (the current owners of the film) had supplied, as well as one utilising my collection of publicity material and merchandise.” 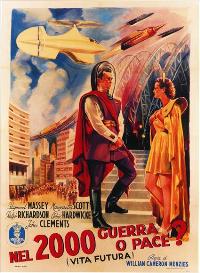 What part of the DVD are you most excited about and was there anything you would have liked to see included that's not there?
“One thing I was always keen on was having some sort of extended version of the film, augmenting the extant footage with stills and script extracts from the missing dialogue/scenes. There were various options, such as using seamless branching on the 96m 24s version, or simply having the major scenes as separate extras. I thought at the very least we could replicate the continuity script 104m 13s version, possibly plumping out its ten extra segments with material from the Film Story that occurs within them. In the end, though, it was decided to go for pretty much everything, with the exception of a few sequences that don't sit well with the actual surviving footage, such as an expansion of the Christmas party in 1940.

“As to what we couldn't include, there are some unused abstract sequences by László Moholy-Nagy for the reconstruction montage, but it wasn't possible to get those, and the same applies to a contemporary newsreel interviewing Wells during the production.”

Have you learned anything about the film, or gained a greater understanding of it in any way, from your involvement with this release?
“The whole process of plotting out the ‘Virtual Extended Version’ was quite revealing about which bits of the film were probably dropped at which point, particularly between the first 130m rough-cut and what we can assume was the more polished 117m 13s version submitted to the BBFC. Where you have missing dialogue or scenes where there is a process shot or uninterrupted music on the soundtrack, we can assume it was an early casualty. For example, the last shot in the town square in 1940 dissolves into Cabal in his study. Between the two there should have been the scene of the young Harding in his laboratory, which almost certainly only appeared in the rough-cut.

“Conversely, there are many examples of cuts between shots leading to the characters apparently leaping from one side of the set to the other, because in-between there were one or more other shots - and lines of dialogue - where they were moving about. The most obvious example is when the drunken Boss comes into Cabal's cell as he is talking to Rowena. Such clumsy editing is more likely to be part of any the various later shortenings of the running time. On top of all that, there are some places where the footage was presented in a different order to that scripted, although we retained the existing running order on the DVD.” 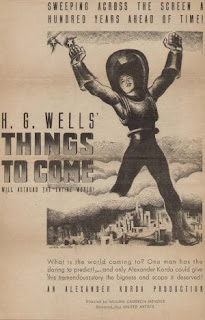 You have a remarkable collection of Things to Come ephemera but is there any 'holy grail' that still eludes you?

“An undecomposed 1936 nitrate print would be nice! Bizarrely, it would still be interesting if anyone turned up a copy of the drastically-shortened 1943 reissue. Although it only ran to 72m 13s minutes, there is still a possibility that it contained footage we don't have now, as I strongly suspect that it came from a different ‘line of descent’ to the 92m 42s print that we had grown accustomed to. We know the UK premiere in February 1936 was 108m 40s, but by the end of the year a 98m 06s print was being used. The US premiere, however, was 96m 24s on 18 April. This will have been cut-down from the UK premiere, while the late-1936 UK print will have been a slightly less drastic cutting-down of the same. The 104m 41s script is a bit of a puzzle, but logically fits between the UK premiere print and the American one, since the latter doesn't contain anything that isn't in it. I suspect it was a first stab at what would go to America, but was subsequently cut further.

“In terms of merchandise and publicity material, original posters are very hard to come by, and those that do turn up can often be hideously expensive. One London dealer had been touting an Argentinean poster for the last few years; it's very nice, but even my interest doesn't extend to the £2,000 they want for it!”

Finally: a pre-fame Terry-Thomas was an extra in the film - have you ever spotted him?
“I'm pretty certain he's the younger Airman you see speaking when Gordon lands at Basra, the one who talks about them having someone to try the ‘Gas of Peace’ on. I daresay freeze-framing him there and drawing a moustache on the TV screen should clinch it!”