For One Night Only 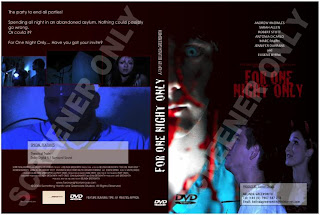 “Don’t worry, it will soon be over,” says one of the characters twenty minutes from the end of this film. Ah, if only that were true. It’s a very long 20 minutes.

For One Night Only is about as generic and unoriginal as it is possible to be. Seven uninteresting, unlikeable teenagers (yawn) hold a Halloween party (yawn) in an abandoned asylum (yawn) where they hold a seance (ya-a-a-awn...) and get killed off one by one (time for bed...). The total extent of characterisation is that the blonde is posh and a bit dim, and she is persuaded by her five friends to seduce a boy who they have ‘bullied’ in the past but whose wealthy father owns the property. Apart from that, what we know about these characters roughly matches the extent to which we care about them. We’re not even told what all their names are.

The old asylum has been empty since 1968, we are informed in a blatant infodump as the characters read stuff off a laptop in their otherwise deserted school library. The old building apparently has extensive CCTV coverage (never mentioned again) and also has 24-hour security patrols (never seen). That’s a lot of effort to protect a property which has stood empty for more than four decades. Mind you, it still has mains power and running water. 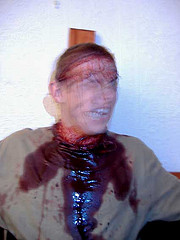 Dressed in various half-hearted Halloween costumes, the septet head down into the asylum morgue which the security staff have helpfully decorated with some cheap halloween gimmicks, bottles of tequila, cans of lager and (nice touch this, I thought) large plastic bowls full of crisps. There’s a little bit of dancing and snogging but really, it just makes you wonder whether anyone who made this has ever been to a teen party. Okay, I know young people nowadays are boring and bland and dull (I work in a university) but surely they’re not this boring and bland and dull. There isn’t even a wise-cracking Token Black Guy to liven things up.

Eventually people start dying and various ghosts start appearing but - get this - they’re not connected in any way. It seems like writer-director Belinda Greensmith wasn’t sure whether to make a slasher or a haunted house film so she tried to compromise by filming a slasher movie but having a ghost story happening in the background of some shots. I wonder whether there is a companion piece to this, all about the ghosts, with occasional glimpses of violence where the two stories intersect. Probably not.

Just when you think the plot couldn’t get any more clichéed, the group whip out a ouija board and hold a seance, wherein a spirit informs them that they should leave because it’s in the next room, and then rattles the door to prove it. So there are definitely supernatural elements to this story and we’re supposed to think they are responsible for the killings, but you would really have to be dim not to work out from the start what is actually going on. The natural assumption, for anyone who has ever seen a horror film before, is that at the end the supernatural elements will come into play, enacting ironic ghostly justice on the real killer. But no. 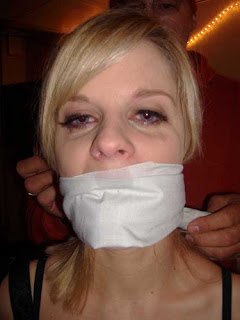 So the actual irony here is that, although there is no surprise about the ‘twist’, there is a great surprise when the film eventually stops with no supplemental twist. The actual ending, a brief epilogue involving the father who owns the property, makes no sense whatsoever that I can see. In fact, this is one of those films where the story manages to be at one and the same time utterly, utterly simplistic and banal and yet completely nonsensical. It is worth also mentioning the soundtrack, which is based on the (all too common) belief that something spooky seen briefly on-screen becomes even spookier if there is a massive music sting at the same time.

For One Night Only - which runs 73 minutes although various online sources claim 91 or even 95 - is boring, badly written and poorly made, with an inexperienced cast whose best members can only reach the heights of ‘adequate’. And this may explain why it has never been released. Except that now it has, sort of.

Greensmith (whose IMDB listing calls her Belinda Green-Smith) and DP Matt Cross made this four years ago in 2009, which is also when it is set, apart from a splash panel prologue of a young couple having sex then getting killed exactly 20 years earlier (yawn). Cross and Greensmith are both credited as executive producers and also share the editor credit (not that the editing is up to much). Greensmith had been working for a few years in hair and make-up (on, among other things, Eitan Arrusi’s Reverb) but wanted to make her own movies so went to film school and started knocking out shorts.

These included Sisters, a four-minute piece about two girls who fall down a hole and get attacked by something, and Hunter, a four-minute piece (with a couple of name actors) about a woman being chased by a man. These are both available to watch on the IMDB and, although they’re better technically than For One Night Only, neither has what you might call a narrative, and so we can start to see why her feature doesn’t have a proper story either. Her other films include 3 Ghosts (a version of A Christmas Carol) and a 20-minute documentary, Women in Horror. 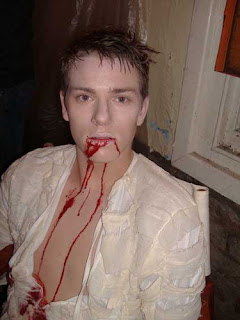 For One Night Only never seems to have played any festivals but at some point was added to an ‘online film market’ called Cinesouq, which has all sorts of stuff listed, including Room 36 and as-yet-unreleased British horror entry The Legend of the 5ive. And then, in January 2013, the complete feature, albeit in a very low-res version, was uploaded onto Cinesouq’s YouTube channel. I don’t know whether that was deliberate - everything else on there is a trailer - but it does finally give us a chance to watch this up-to-now unseen entry in the British Horror Revival. Obviously it’s not possible to comment on things like photography and lighting from this version but those are not the problem with the film. The problem is that a poor cast play boring characters we neither know nor care about who go somewhere pointless and encounter boring, irrelevant spookiness before dying in uninteresting ways, devoid of tension or scares. In the dark.

On the other hand, everybody has to start somewhere and perhaps it’s as well that Greensmith’s first feature remains effectively unreleased so that she can learn from it and make a second one. In the meantime, she seems to be back on the hair and make-up gigs, working on assorted productions from Captain America to Corrie. She is also attached to co-direct Broken Britain, a post-apocalyptic remake of The Magnificent Seven.