Dave Campfield, director of the terrific indie thriller Under Surveillance, answered one of my e-mail mini-interviews in May 2006. Dave later made the very entertaining Caesar and Otto movies so I interviewed him again in 2015. 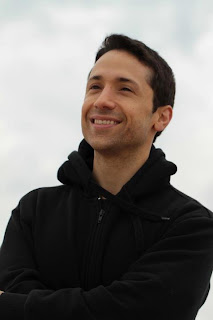 What made you decide to choose this genre and this particular story for your debut feature?
“As a lot of people know, selling a low- to no-budget movie without name actors is next to impossible. Genre movies, such as thrillers and horrors in particular, are much more likely to find distribution. That was a big catalyst right there. That being said however, I’ve always been a fan of thrillers. I took it as an opportunity to take the genre into some unfamiliar territory.

“Locations were another issue. Frankly, simply getting the rights to shoot on most locations becomes a near impossible task for any fledgling filmmaker. Between permits and insurance, you’re pretty much up the creek. That’s why I chose to limit so much of the story to one big house. Most of the interiors, to my parents’ dismay, were shot in my own family’s house. However the challenge was in creating a story that would be interesting as possible within those confines.”

Where did you find your cast and crew?
“Crew I found from internet sites such as mandy.com. Casting wise, I placed a notice in Backstage magazine and received enough headshots to make my mailman want to shoot me. However I did know a few key members of the cast whose roles were written specifically for them.”

What sort of creative/technical choices did you have to make with regard to including the surveillance footage itself?
“Part of the gimmick of Under Surveillance, obviously, is the use of surveillance footage as part of the movie itself. After the multiple tenants are placed under video surveillance, the central characters get to peer into their lives. We see what they see. Sort of. Frankly, unending black and white long shots of people talking didn’t really seem to be a cinematic way to go. So, there’s a bit of creative liberty taken. Despite being surveillance footage, we do cut in to close-ups. I thought it would be a non-issue as one character states the cameras could zoom in, though some people find it distracting nonetheless. In outer space, sound doesn’t travel. Yet in every galactic film we hear a cacophony of lasers and explosions. Sometimes a filmmaker needs to take a liberty for dramatic effect.” 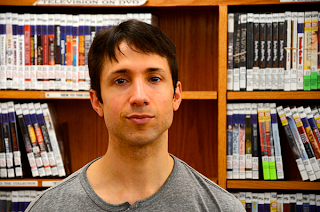 What are the advantages and disadvantages of working on both sides of the camera at once?
“I have a tendency to be a bit fidgety. And when I’m in front of the camera, I’m not even aware of it. But that’s the beauty of video playback. As far as advantages? It’s one less actor you have to worry about showing up. It might sound funny, but it’s true.”

Where has Under Surveillance been shown and how has it been received by critics and audiences?
“Its first official playing was at the Hollywood DV festival this past December. Unfortunately, the film wasn’t quite complete at the time it played and didn’t register the way I had hoped. However, the reaction amongst online critics has been terrific. Nine out of ten have given it strong marks, but to look at things realistically... it’s not impossible I’m receiving a grade curve simply because I’m an unknown and didn’t have a budget. Audience reactions have been extremely positive. But maybe they’re just being nice for all you know.

“The truth of the matter is, over a four year period I poured every bit of my heart and soul into the movie. Making sure that every scene that’s in has to be there, that every musical cue is needed, that every cut lands where it’s supposed to. Hopefully it shows. Can the film be better? Of course. But I did the best job I could under the confines. The true test will be how it plays to the average filmgoer. With prospective distribution on the horizon, hopefully I’ll get to find out.”

What is your next project?
“I shot a comedy recently in Los Angeles, entitled Caesar and Otto. It’s a bit like The Odd Couple meets the Three Stooges. Entirely different than Surveillance, and certainly not for everyone. It’s still in the editing process and hopefully will be done soon enough.

“I’m also in the process of writing a horror that follows some of the supporting characters from Under Surveillance. If Surveillance was a mysterious, low key thriller, expect this to be a true horror film with wall to wall suspense. If it gets made, it’ll be bigger, bolder and more intense.”