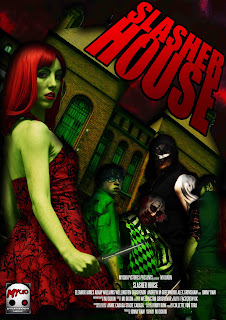 
With its prison setting, multiple psychos and determination to not explain what is actually going on, MJ Dixon’s Slasher House bears a passing resemblance to Pat Higgins’ KillerKiller although the two are actually very different. Slasher House is in some ways more conventional - in that it’s basically a succession of violent deaths and will therefore please undiscriminating slasher fans - but in other ways it’s quite individual and distinctive. It at least attempts something different with the hackneyed tropes of slasherdom and for that it is to be applauded.

The opening is yet another ‘people waking up but not knowing how they got there’ sequence, a cliché which is well past its sell-by date. In this case, the awakenee is Red, played with typically wide-eyed incomprehension by BHR favourite Eleanor James (Forest of the Damned, Backslasher, Colour from the Dark). Never one to shy away from nude scenes, Eleanor makes up for her initial lack of clothing with extraordinary amounts of eye-liner and mascara. She finds a party frock, some cans of lager and what I would describe as an awl (google it if you didn’t do woodwork at school), all labelled with post-it notes.

She is in a cell in a largely empty prison and, when her door opens, she finds another inmate, Nathan (Adam Williams). In fact there are five prisoners in the place, the other three being a psycho clown, a psycho who likes playing with power tools and a big hulking psycho with two enormous cleavers of a size and design rarely seen outside of Japanese video games.

The essence of the film is the attempts by Red and Nathan to escape - and fight back against - the psychos, each of whom is given a little flashback which tells us really nothing except that the fellow in question is indeed a sadistic murderer. One of the big stumbling blocks of the plot is that no-one ever attempts to escape from wherever this is (we will never find this out - or indeed how the killers came to be there, so don’t expect a resolution in those directions). When Red first meets Nathan she tells him that there is no way out of the building when she has, up to that point, only explored the short distance between their respective cells. While the film’s ending does in fact provide some justification for this line, at the same time it pretty much contradicts everything before it (and much of what follows). 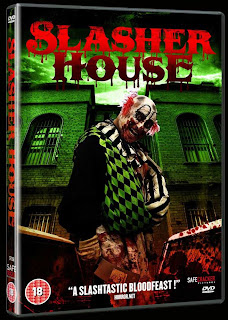 Some of the final act ‘revelation’ is pretty obvious to be honest and much of it makes no sense; some things manage to tick both boxes. Red herself gets two flashbacks - dated ‘four years earlier’ and ‘three months earlier’ - one of which looks like it has fallen in from a different (and frankly, more interesting) film. Oh, and there is a demon of some sort involved in all this but that’s probably the most obtuse plot strand of all.

It’s clear that MJ Dixon has had lots of neat ideas but the script doesn’t mesh into a satisfying narrative, either before or after the ‘twist’. And there are some rather annoying plot-holes, including a door which can be easily opened at one stage but later seems to present an insurmountable barrier.

As both writer and director, Dixon does a sterling job with the scares, the action and the tension but falls down on the dialogue scenes between Red and Nathan which are dull, prosaic and stiffly directed. There’s no spark or sparkle in the dialogue, just a succession of questions and answers. In good dialogue, what we need to know should come not from what is said but from what is unsaid; there is no subtext here (or if there is, it's buried too deep!). The root problem here is the lack of characterisation. The clown, the power tools guy and the hulk are one-note ciphers but unfortunately so are Red and Nathan. Without interesting, rounded characters there’s no opportunity for character interaction and hence no chance for the dialogue to shine.

On the other hand, I get the impression that a lot of slasher fans usually fast-forward through the talky bits of films and even if they don’t, I’m sure they won’t be bothered.

All the above notwithstanding, the most distinctive element of Slasher House is Dixon’s cinematography (he was also editor) which paints everything in a sort of sodium-lighting green, apart from specific red highlights. In the case of Ms James, this means her hair, fingernails, dress and lippy. Only the flashbacks are shot in realistic tones. While the effect isn’t distracting or annoying (once one gets used to it) there also seems to be no purpose behind it that I can determine; it’s just a gimmick. 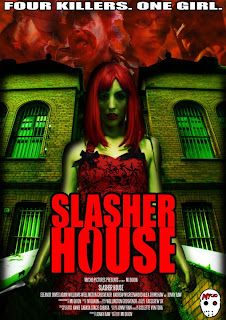 The three killers (and maybe you should avoid looking at the advance publicity if you don’t want a spoiler for a really, really obvious plot point - oops, too late) are played by Wellington Grosvenor, Andrew M Greenwood (both in Dixon’s unreleased first feature Creepsville) and Alex Grimshaw. Blaze Bayley gets a ‘special appearance by’ credit as the voice of the Demon, adding the Wolfsbane/Iron Maiden singer to the list of rock/pop stars who have been in British horror films. Grosvenor is also credited with visual effects while the creature make-up is by Annie and Stacie Cabasa of Facecrew UK.

Produced in 2010 (the copyright date on screen) Slasher House premiered at Horror-on-Sea in early 2013 before a UK release through Safecracker Pictures. Dixon is now at work on his third feature Thorn and one segment of the Blaze of Gory anthology.

As someone largely disappointed with the slasher genre (you can tell, can't you) I found Slasher House enjoyably non-formulaic and surprisingly watchable despite its faults and I'd certainly take the time to view another MJ Dixon movie.