Beast in the Basement 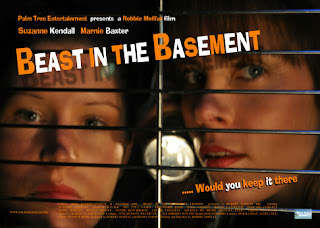 Who is Robbie Moffat? He is a film-maker - director/writer/producer - and he makes a lot of films. The IMDB lists 18 completed feature films as director since 2000. There are 26 films listed on his Palm Tree Films website. And yet I’m willing to bet you haven’t heard of a single one. Because I certainly haven’t.

Let me put that in context. Most of the films I review are movies that most people have never heard of. That’s not surprising. Most people, it is very clear, even if they say they like watching films, actually have no concept of anything outside of mainstream UK/US cinema produced after they were born. My point is that even those of us who love cult films, indie films, obscure films, even we have never heard of, let alone seen, anything made by Robbie Moffat. Yet the man is a factory.

And on the evidence of Beast in the Basement (aka Conquering Heroes), these are real films. These are not the amateur camcorder larks of Paul TT Easter nor are they the over-wrought self-indulgencies of Philip Gardiner. Moffat actually knows how to make a film, with decent production values, good (if non-name) actors, more-than-competent photography, editing and sound. Beast was produced at Pinewood, from where Moffat has recently relocated his operation to Wimbledon Studios. It is a perfectly good DTV-quality B-movie and therefore actually considerably better than than most of its rivals.

So why do Moffat’s films only seem to be available through his own online channels or via self-released DVDs? Why are they never reviewed anywhere? How has he managed to bang out a couple of feature films every year since the turn of the millennium without anyone outside of his own casts and crews knowing who he is? It’s all very odd.

There is a biography of Moffat himself on his website. His background is in publishing (Palm Tree Books, est. 1980) , festival management (Newcastle Fringe, Swansea Fringe) and theatre. He clearly has fingers in many pies and has done lots and lots of work in many media. And still no-one has heard of the guy, and his extensive filmography looks at first glance like some epic vanity project. I don’t think it is, but I also don’t know what it is if it’s not that. 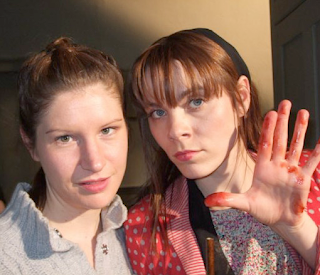 He has made romantic dramas (Love the One You’re With), gangster thrillers (The Hawk and the Dove), historical epics (Winter Warrior), crime capers (Rain Dogs), biopics (Red Rose), romcoms (Photoshoot) and even space operas (Dark Side of Heaven). His horror films are Cycle (‘Five students stalked by a cannibal’), Seven Crosses (‘They didn’t set out to be murderers!’), Sisters Grimm (witches and wolves in Georgian England) and this one.

Marnie Baxter (a Shetlander who was a private detective in a couple of episodes of EastEnders) and Suzanne Kendall (who once acted in a spookshow event onboard HMS Belfast!) are Lily and Iris, sisters living in a large house near an army base, inherited from their officer father. They are popular girls with the local squaddies, who often pop over for a drink and a dance. One particular soldier, Mitch (Jon-Paul Gates, who was in The Asylum’s Welsh-shot Dragon, dull BHR entry Messages, a couple of Steven M Smith features and even Charles Band’s Decadent Evil II!) has a real crush on Iris, bordering on obsession. Danger arrives in the form of a series of deaths which are blamed on an escaped big cat but which seem to follow a pattern, all targeting soldiers and all within the vicinity of the girls’ manor house.

We learn fairly early on, to no great surprise, that there is someone locked up in the girls’ cellar, and our natural assumption is that he is periodically escaping and transforming into a werewolf. Or were-cat. Or something. We’re going to be half-right.

Beast in the Basement turns out to be more psychological horror than supernatural but that’s not to its detriment. The secrets kept hidden by Lily and Iris are dark and deep and masked by their outward veneer of normality. In their mutual dependence, they reminded me of the sisters in Don’t Ring the Doorbell but with less clearly defined, hence more ambiguous and more interesting, comparative degrees of oddness. Iris is the older, more domineering one, more flirtatious with the soldiers (which may be her downfall) and with a more hard-nosed view of their father. Her younger sibling Lily, though she at first seems the follower to Iris’ leader, is actually more level-headed and calmer, yet she has effectively blocked out the bad memories of what Daddy was really like.

As the killings continue, and Scottish-Indian Detective Arun (TV presenter Sunita Shroff, giving a frankly cracking performance) snoops around, the sisters realise that their prisoner has indeed found a means of escape. The question then becomes: how can they prevent further deaths without revealing their own transgressions? Woven into this are Mitch’s drunken reaction to Iris’ rejection of his proposal and a series of relationships within and around the army personnel. I’m not saying it all works, but enough works to make this a watchable film. Powered by Baxter’s and Kendall’s finely detailed performances of two fascinating lead characters and their unusual relationship - inseparable from their situation and family history - Beast in the Basement’s strengths outweigh its weaknesses. The acting is all good (most of the cast are regulars in Moffat’s own rep company) and the photography, editing and sound are all crisp and professional. 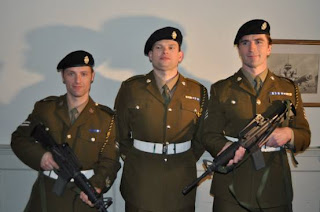 Yes, the low budget shows occasionally. For example, the soldiers only seem to possess dress uniforms which they wear at all times, even on a training run. And the one time we see somebody shot at point blank range, it’s all rather clean and there’s none of the blood and brains everywhere which would happen in reality. On a script level, the precise relationship between the sisters and the squaddies isn’t clear, and their penchant for line dancing is a bit odd, with the soldiers donning extremely gay sequinned stetsons to join in.

But the dialogue is well-crafted and realistic, and there is some nice characterisation in the supporting cast, especially Lisa-Marie Long (Temptation, The Hike and Mara Jade in a Star Wars fanfilm) as female squaddie Jas and Louise Hawthorne as Arun’s patient colleague Charlie. Also in the cast are Bruce Lawrence (Bare Naked Talent, Stag Night of the Dead, The Watcher Self and a Doctor Who Christmas Special), Howard Corlett (Man Who Sold the World, The Demon Within), Michael Elkin (writer/director/star of Irish short Banshee), Michele de Broel (also in Banshee) and Jason Harvey (recently in a half-hour short called She-Wolf of the Woods).

Now, the more alert among you may be saying - indeed, may have been saying for several paragraphs now - hang about, that sounds like a remake of dodgy 1970s Brit-flick Beast in the Cellar. And indeed it is. The sisters in that Tigon production were considerably older, played by Flora Robson and Beryl Reid as mad old spinsters in contrast to the striking Ms Baxter and the extremely cute Ms Kendall, but the basic plot was identical, down to the eventual resolution. The marketing material distributed by Moffat when Beast in the Basement screened at the Cannes Film Market in 2011 admitted that Basement was a remake of Cellar but on screen there is no acknowledgment that Moffat's script for Basement is based on the original screenplay for Cellar by writer/director James Kelley. Which seems a tad unfair.

Here's the thing. Beast in the Cellar (aka Young Man, Are You Dying?, originally released as a double bill with Blood on Satan's Claw) was produced by Graham Harris... who was the father of Simon Harris... who was the producer of Beast in the Basement. It's a sort of 'Dad, can I borrow the movie premise?' affair. An editor by trade, Harris fils also cut this film and produced two further Robbie Moffat joints, comedy Nudes in Tartan and historical drama Crab Island. If his IMDB page is accurate, then he has amassed a range of interesting credits over the years include visual effects editor on Cyborg Cop and The Muppet Christmas Carol, sound editing work on Event Horizon and Superman IV, and assistant editorial duties on Aliens, Batman, Bridget Jones’ Diary and many others. Now he’s producing Robbie Moffat features. Hey, it’s a gig.

Elsewhere in the credits, this was the first feature score for hard-to-spell composer Ram Khatabakhsh whose subsequent work includes Dominic Burns’ Cut and Will Moore’s missing-in-action Blood Army/The Nephilim. Moffat’s regular DP Bob Ramsay handled the camera while costume designer June Hudson has the coolest CV of anyone in the list, having spent the late 1970s working on Blake’s 7, Survivors, Doctor Who and The Basil Brush Show. 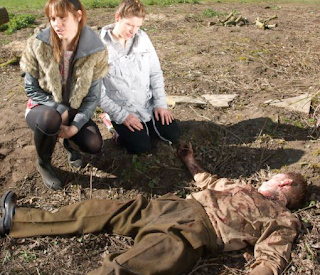 Beast in the Basement is one of those films that ably demonstrates the vast numbers of professional features being made in the UK nowadays, far, far outside the view of any sort of mainstream press or media. Frankly, quite a long way from the view of even farty ex-journos and their cult movie websites. But at a couple of quid a pop, it’s worth those with an interest in the BHR checking out this and other Robbie Moffat titles. This is never going to set the world on fire, but you and I have both seen far, far worse films than this one, often made with ten times the budget.

Finally, for completists, it should be noted that this isn’t a werewolf film. It therefore joins Kevin McDonagh’s Lycanthropy in the short list of British horror films which seem to be about werewolves but aren’t. And while this does at least offer an explanation near the end of why the attacks seemed to be carried out by a wild animal (which is more than Lycanthropy managed), it’s a pretty half-hearted and pathetic explanation which doesn’t really stand up to even the most cursory examination.