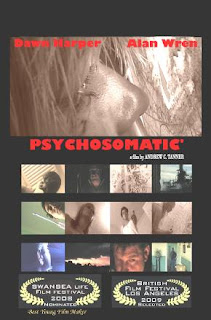 Psychosomatic is very low-budget, completely original and unpleasantly creepy. It’s slow-moving and overly stylised and, to be honest, there were a few times when I started muttering to myself and thinking of negative things to write about it. But the film won me round. It’s not perfect but it’s a damn fine attempt to do something different which succeeds in its basic ambitions.

And it leaves one wanting a shower.

Here’s the set-up. David Giles (Alan Wren) is a frustrated, unemployed artist who spends his time stuck in the attic of his house painting and sketching, occasionally yelling obscenities downstairs to his wife as she goes out to work. Next door, Ruth Hayes (Dawn Harper) is a lifeless, blank-eyed housewife, scrubbing and cleaning her home to the point of OCD while her husband is working. The two are on nodding acquaintance but have never spoken and don’t even know each other’s names.

Just up the road is a chemical plant.

One day, when David is knocking on Ruth’s door to hand over a parcel which the postman delivered to his house, a massive explosion rips open the chemical factory, releasing a cloud of gas. Ruth opens the door, David lurches inside coughing and gagging, then follows the emergency instructions supplied to all local residents by the chemical company: sealing doors and windows and suchlike.

So now Ruth and David are trapped together, for an indeterminate amount of time, in a sealed, candle-lit house with nothing but a radio for company.

I told you it was unpleasantly creepy.

Every so often we cut to Ruth’s husband John (director Andrew C Tanner), handcuffed in a squalid room, talking to camera. In fact this is the opening shot in an incredibly short prologue which then lunges into a quick flash-forward montage of shots from about five minutes into the film, which made me wonder if I was actually watching the trailer (there was no menu on the screener disc). A ‘one year earlier’ caption indicates that everything we’re being told is effectively a flashback as recounted by John Hayes, who apparently stands accused (falsely, he claims) of David Giles’ murder. 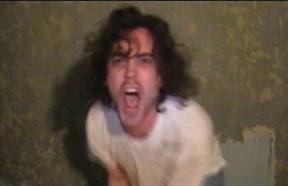 In these scenes John has long, wild hair but he is much smarter in the shots we see of him at home, most of which are flashbacks-within-the-main-flashback. In some of these he is talking on the phone to a doctor with a strangely distorted voice (also Tanner) who explains what drugs Ruth must take and why.

On the day of the gas leak, John has gone out to buy some more intravenous prescription drugs for his wife who subsequently drops her last bottle on the floor. So, sooner or later, she’s liable to go loco. But will that happen before David gives in to his base urges?

It’s a classically simple, yet highly original, situation for a psychological thriller. Two people, trapped by outside forces, each presenting a danger to the other, unaware of the danger which they face. I’m not entirely convinced that we need the framing story of Ruth’s husband; this might have worked better as a two-hander. The set-up would certainly make for a powerful stage play.

What you wouldn’t get on-stage of course is all the constant flashing back and forth - some of it in sepia for no apparent reason - including a sequence featuring the house’s previous occupant Tony (Rhys Hills, who also wrote the very evocative original music) going insane. David reckons that the whole street is strange in the head and that perhaps it’s something to do with the perfidious influence of the chemical plant. But David is no more a reliable narrator than Ruth or John.

And then there are the mysteries. What, for example, is inside the package which David took receipt of when the postman found no-one in next door? We see Tony opening up then resealing the box so it is something significant. We do later discover what is in the box and it seems banal and irrelevant - then we find out more and suddenly it’s very relevant again.

Equally mysterious is a locked upstairs room. Ruth hides the key, adamant that the door is locked and unopenable (David later finds the key, going straight to it without explanation). A flashback shows us John trying to clean this room; whatever is in there is smelly enough to make him sick and sounds like it has attracted a lot of flies.

Psychosomatic runs a crisp eighty minutes and yet it still seems to drag in places with scenes going on just a little too long. Any film with only two principal characters is a challenge to make interesting and that’s made even more difficult when one of them is doped up to the eyeballs. So one can’t blame Andrew for sticking in all those flashbacks and inserts (including some odd cutaways to flies). But he is definitely too keen on finding interesting camera angles; so much of the film, especially at the beginning, is shot on a slope that it’s quite a shock when we see any image that’s upright and square-on.

The DV image is nothing special and shows up the film’s ultra-low budget but on the other hand such simplicity fits the parochial banality of the setting (we can see from the address on the parcel that Ruth, David and John live in Barry, South Wales). The sound is no great shakes either, to be honest, especially when voices are raised - but that’s the perennial problem of micro-budget indies. Tellingly, there is no cinematography credit although Tanner was ‘camera operator’ (also editor, foley and sound effects). Samantha Jones, who appears briefly as David’s wife, was sound recordist while Gareth Price, who also has a bit part, was ‘tech advisor’ whatever that means. There are no other credits. 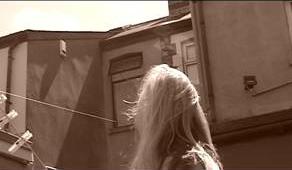 Despite its technical shortcomings and directorial overindulgences, Psychosomatic is a clever and creepy film, surprising its audience with twists and reverses to the end while maintaining an air of sinister, slimy dread. Naturalistic performances from the two leads which look semi-improvised in places, hold the film up whenever it threatens to start flagging and the original premise keeps the viewer hooked. This has been a success at several festivals and frankly I can see why.