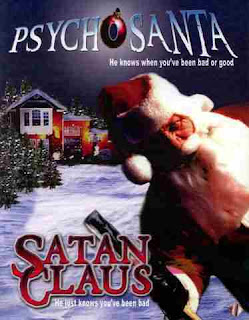 Psycho Santa is an odd film in that it’s sort of, but not quite, an anthology picture. What we get is a series of flashback stories being told by a guy named Ron (Jeff Samford) to his girlfriend Jess (Michelle Samford, who looks a bit like him so may be his sister) as they drive to a Christmas party. But the stories all feature the same psycho (I think) and are in narrative sequence. Perhaps this just helped with the logistics of filming, allowing each part of the film to be treated like a short.

Under the titles we see a young woman moving around among abandoned cars, apparently hiding from a familiar red-and-white figure whom we glimpse occasionally. When the movie starts with the couple heading for the party, it’s not obvious what the relevance of the credit sequence was.

The first story, ostensibly set ten or eleven years earlier, has two girls (Sequoia Rose Fuller and Rachel Michelle Gnapp) turning up at a remote cabin for their annual Christmas slumber party. The third part of the trio seems to be already there as there are several parcels under the tree with her name on them - shouldn’t they have the other girls’ names on them? - but there’s no sign of her so they assume she has wandered off somewhere. One girl goes out looking for pebbles while the other has a shower. I suppose if you find pierced nipples attractive this nude scene might be sexy, but for some of us it’s a complete turn-off.

As the negligee-clad girls get into party mode, somebody is watching them from outside, then...

After a clever little shock (which I won’t reveal here) we cut back to Ron who explains that all three girls died. His girlfriend doesn’t question him on how anybody could, therefore, possibly know what happened in the cabin.

The next story is set ‘last year’, with two burglars breaking into an empty house, only to find a sexy young woman in her underwear there (statuesque model/make-up artist Gayle Elizabeth). The moment when she sees them, then walks right past as if they’re not there is very nicely handled by the actors and the director. That’s probably the artistic highlight of the film and the explanation makes perfect sense, which is more than can be said for the burglars’ gratuitous murder of the girl. They then open a locked door, from behind which they can hear strange noises - and both meet a gruesome end. (One of the burglars is Lucien Eisenach, who wrote, directed and starred in Fetalboy Goes to Hell, which shares several cast with this films.)

It turns out that the unseen psycho from the first story was this woman's son, something we learn as her husband (Robert Lanham) is interviewed by a detective (writer-director Steve Sessions whose films - Cremains, Hellbound: Book of the Dead, etc - share many of this movie's cast; he also provided the excellent music for this film). The psycho, named Chris and played by Jason Barnes, was thought deceased in a fire at the asylum (‘for the dangerously insane’) where he was held, but in fact he survived with horrific burns and has been kept locked up by the couple ever since. Now he’s on the loose and we see him kill a bloke in Santa costume and steal his clothes and beard.

A couple more murders follow - all flashbacks from the story being told by Ron, and similarly impossible for him or anyone else to know as everyone involved (apart from the psycho) gets offed. Finally, we have Josh (associate producer Eric Spudic, writer of Maniacal and Aquanoids, who was kind enough to send me this disc) and his geekily attractive sister Alice (Krystal Stevenson) whose car breaks down, and we recognise her as the girl from the title sequence.

Probably the biggest failing of the movie, which is well directed with some top notch photography and good editing, is that despite all this it’s very slo-o-ow. Too much time is spent on (well-directed, well-shot, well-edited) sequences of people doing things that we don’t need to see, mostly with little or no dialogue. We watch the burglars, for example, walk up to the house, and then we watch them carefully pick the lock, and then we watch them walk around the house looking for the safe, and it all just goes on too long with nothing happening.

The first story in particular is a tale of about ten minutes that could have been told in two, or could actually have been stretch out to a twenty-minute Tales from the Crypt episode if the characters had been given some dialogue and something to do other than shower, put on underwear, pick up pebbles and dance. Atmosphere is good, but you can have too much atmosphere...

After they split up, the girl is menaced by the psycho Santa, runs away from him, and is suddenly, inexplicably (unless I fell asleep again) in a car graveyard, where we have a differently edited re-run of the title sequence. There is a lovely bit of audience misdirection when she hides from her pursuer in an old school bus - more clever, tense scenes like that would have benefited the film overall. Her brother meanwhile ends up at an old cabin, where he also comes face to face with the psycho Santa, but a denouement is in the offing.

Psycho Santa looks surprisingly good for a shot on video feature, and the gore effects are not bad at all. The problem is, it’s simply too long. Well, maybe not too long - it runs about 81 minutes - but there’s just nothing happening for most of that time. And the ending, back with the couple in the car, manages to be both predictable and lame, unfortunately. But I’ve seen far worse.

Available on a convenient double bill with another cut-price Christmas horror, Satan Claus. Most curiously, the film carries no crew credits apart from writer-director, producer, associate producer and composer. Despite the camera-work, editing and special effects all being highly creditable, no-one is actually credited for them! (It also manages to spell Lucien Eisenach's name wrong in the cast list.)