Eleanor James first came to my attention in Pat Higgins’ horror-rom-com HellBride and since then she has become a regular name in indie British horrors with roles in such films as Three's a Shroud, Slasher House, Backslasher and Bordello Death Tales. I finally had a chance to meet Eleanor at the UK premiere of Ivan Zuccon’s Colour from the Dark in January 2009 and followed that day up with a e-mail interview in early February. 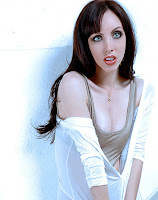 How did you get started in acting, and specifically acting in low budget horror movies?
“Completely by chance, I had never really considered acting as something I could do. It seemed like something that was completely out of my reach. I’d dropped out of uni and just got back from two years travelling with absolutely no idea what the hell to do next, so I was doing random promo jobs and bits of modelling here and there.

“I’d starting seeing this artist/director who I’d met in a park and he kept telling me to take up acting. Not that I’m a drama queen or anything! And I kept saying,'But how do you do that?' There was no way I was going to drama school. Not my scene. So I was doing some incredibly dull promo job and met this actress who gave me a list of websites like Shooting People etc. and I started applying for acting jobs.

“I did lots of short films and pretty much everything and anything I could to get acting experience. Then a few months later I got cast as a demonic angel in Forest of the Damned, a horror film with Tom Savini, and became quite a fan of low budget horror after that.” 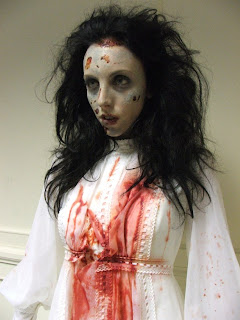 What attracted you to the role of Josephine Stewart in HellBride and what was that film like to work on?
“I love playing extreme characters. Josephine Stewart was a girl in love in 1840 who caught her fiancé cheating on her on her wedding day, went on a killing spree - well, of course - then got a bit pissed off that some other bird from the 20th century had nicked her wedding ring. And who can blame her? So she came back as a ghost with a beaky monster as a sidekick.

“It was great fun I got to wear a vintage wedding dress and Beverley Chorlten did an amazing job on my make-up. I was completely unrecognisable for most of the film and I love that. It was a lot of fun working with Pat Higgins who is an incredibly nice guy and even let us cover him in fake blood at the end of the shoot. Why? I have no idea... it must have seemed like a good idea at the time.”

How did you land a role in Colour from the Dark and, apart from the language, what differences did you find making a film in Italy?
“Ivan Zuccon found me on a casting website and e-mailed, asking me to read the script and consider the role of Anna. I read the script and loved it. It all seemed too good to be true! I couldn't believe how lucky I was, actually. Also it was great because my role was a 1940s Italian peasant and I got to cry, scream, do the ironing and get shot in the head... We were filming mainly at night in the countryside and were next to a huge lake so instead of freezing on set in England I was warm but getting eaten alive by mosquitos. I had about 20 huge bites on my feet and was constantly scratching! We were filming in a derelict house which was definitely haunted (we named him Albert) so it was naturally very creepy as well.” 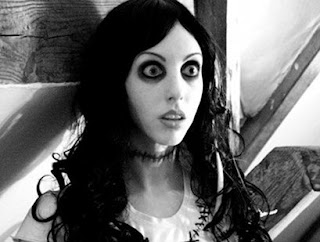 What were the challenges of playing Stitchgirl in Alan Ronald’s Universal-homage segment of Bordello Death Tales?
“Stitchgirl has only just been stitched together and is a little awkward in her new body. So my movement had to reflect this. The director Alan Ronald asked me to study Elsa Lanchester in Bride of Frankenstein so I tried to incorporate a few of her jerky body movements into my performance. I also had to keep my eyes as wide open as possible and not blink. There was no dialogue for my character, just a few squeaks, so in some ways it’s my least challenging role so far but hugely enjoyable!”

Back in May 2007, reviewing HellBride, I commented that you could be the next Eileen Daly - and 18 months later we find you and Eileen working together on Braincell. What can you tell me about that film?
“Braincell is written and directed by the talented Alex Birrell and stars Joe Zaso, Raine Brown, Billy Garberina, Eileen Daly, Leon Lopez and Matt Berry from The IT Crowd. It’s being produced by Cinema Image Productions in New York. The film's a bizarre sci-fi horror concerning mind control and dreams with a few mental patients-turned-zombies thrown in.

“We filmed in and around Liverpool and I played an ex-porn-star-turned-nurse called Monica. A lot of my scenes are with Eileen who it was great to finally meet. Eileen had the role of Nurse Audra which was written for her by Alex Birrell and you could say our characters have a rather intense working relationship.” 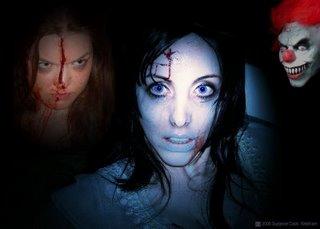 How happy are you with your current association with horror movies and where would you like your acting career to go in the future?
“Right now there seems to be more opportunities for me in the indie horror scene because it seems there's more horror films being made. I’m a fan of the horror genre: there's such a huge range out there and as an actress the characters I could play in horror films are probably more extreme. Obviously I do and would like to continue working in other genres too but for now I’m more than happy to be associated with horror movies.”