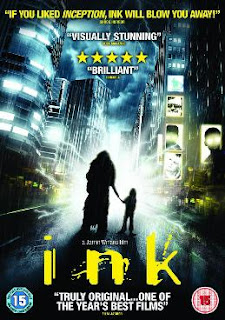 The trailer for Ink promises much but the film does not cash in those cheques. What could and should have been an enigmatic and thought-provoking urban fantasy that challenges our conceptions of reality has ended up as a confused, pretentious, overblown (and way overlong) mess.

This is a film made by someone raised on pop videos, commercials and YouTube, someone who believes that there’s no point having access to a digital post-production technique unless you’re going to use it. Repeatedly. All the time. Watching Ink is like looking at a really terrible website full of different fonts and colours with endless flash animations and rows of dancing hamsters. This is chuck-it-all-in-because-we-can film-making which completely obscures the simple story at its heart.

And the story is unbelievably simple. It concerns a guy called John Sullivan (Chris Kelly) who is some sort of financial executive manager something. It’s completely impossible to work out what he actually does but I can’t tell if that’s because the dialogue in the office scenes is realistic (hence offering no clue to those of us not involved in multi-million dollar whatever-these-are) or whether it’s because writer-director Jamin Winans has simply made up a bunch of corporate-sounding shouty technobabble: “Harrison’s going to close on Apollo!” “What? That’s a disaster! Let’s make up some numbers!” “How about $18.50?” “Yes, that’ll work!”

I should stress that Ink is not a comedy. Although it might have been marginally better if it had been played as one.

John has a young daughter, Emma and we ... eventually ... discover that custody of Emma was awarded to her maternal grandparents when her mother was killed in a car-crash. That might have been useful to know early on. Actually, anything at all would have been useful to know early on as the first 25 minutes(!) of this film is an unexplained and inexplicable melange of dream sequences and things that look like dream sequences, mostly featuring people we will never see again. 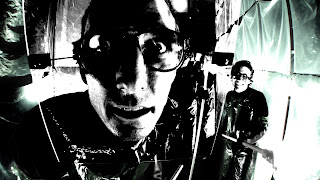 In one of the few actual bits of plot, which consequently sticks out like a sore thumb, Emma’s grandad (Steve Sealy) tells John that the little girl has had some sort of non-specific seizure and is in a coma in hospital and - for some reason - the only thing that might help her is a visit from her estranged daddy. Much later we have a flashback to the custody proceedings where the judge talks about John’s errant behaviour and drug-taking, which again might have been more useful to know about earlier on.

So the plot is this: girl has seizure (off-screen); grandad tells father to visit her; father refuses (for no apparent reason); father has car-crash and finds himself in same hospital as daughter so goes to her and she wakes up. Now imagine that stretched out to 105 mind-numbing, arse-numbing minutes of over-the-top editing and over-exposed cinematography.

John’s story jumps backwards and forwards in an endless stream of flashbacks and repeated scenes although thankfully he has a beard in all the ‘current’ sequences and is clean-shaven in the flashbacks (apart from when he wanders into his own flashbacks to talk to his younger self). But mixed with this is a story about four completely unexplained young people who have some sort of magic abilities and inhabit the dreamworld. Or something.

Actual character names are rarely used in the film, a crass mistake since audiences need to know this one simple thing to keep track of - and care about - who’s who. Working from the IMDB, the brunette with a samurai sword seems to be called Allel (Jennifer Batter) and the tall guy with crosses of masking tape over his eyes seems to be called Jacob (Jeremy Make). He is a ‘pathfinder’ we are told, though this is never explained. There’s also a black guy called Gabe (Eme Ikwuakor) and a blonde woman called Sarah (Shelby Malone) but they seem to be there merely to make up the numbers and don’t do anything, as far as I can tell, except follow the other two around then join in with the climactic fight. 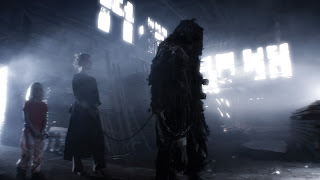 These four start trailing John ... eventually ... although neither he nor anyone else can see them. They’re trying to get him to visit his daughter which they eventually achieve by Jacob setting up a hugely complex sequence of events: one person bumps into someone else who spills a drink which makes someone else slip, which distracts someone else and so on and so on and so on until eventually John crashes his car (which was actually the first thing we saw at the start of the film so it has already happened anyway). This is all very clever and all that but entirely unnecessary and completely unexplained. It’s just flashy, fancy effects instead of a coherent plot - which is really a description that could apply to any part of Ink or indeed the film as a whole.

‘Ink’ turns out to be the (meaningless) name of a character in the third story strand, a shambling mutant with a ridiculously huge prosthetic nose who has kidnapped Emma from her bed in one of the could-be-a-dream sequences in those chaotic, confused first 25 minutes. Throughout the subsequent chaotic, confused 80 minutes he drags Emma along through some sort of alternate reality which may be dreamland or may be the afterlife or may be Leighton Buzzard for all that we’re told anything. Along the way he meets a woman called Liev (Jessica Duffy) who says she is a ‘storyteller’ though she never tells any stories in this film. Liev initially fights Ink but then for no apparent reason agrees to become his prisoner.

These three strands of plot are interwoven. Well no, that suggests a pattern. It’s more that they have been put into a sack and given a good jumble before being tipped onto the floor, stapled together and called a film. Honestly, the whole thing is utterly incomprehensible, not because it’s clever but because it thinks it’s clever. Randomly inserted into all this are the completely unexplained bad guys, called Incubi, who wear squeaking leather suits and have glass screens in front of their faces (except in the final fight where these are removed for no apparent reason and all the Incubi get big, glowing eyes). 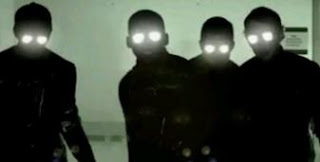 No attempt is ever made to tell us who/what the Incubi are, what they want or what threat they present. Ink’s motivation for kidnapping Emma is so that he can present her to something called ‘The Assembly’ (which may be the same as the Incubi) but why he picked this particular little girl is never hinted at, nor how Allel and her friends knew to try and stop him in the initial fight sequence in Emma’s bedroom. All the (vastly over-edited) fight scenes are long and boring and there are occasional unexplained voice-overs telling characters things they already know.

We do eventually find out who/what Ink is but this revelation completely contradicts much of what has gone before and fails to explain why he looks like a caricature of Jimmy Durante. (I kept expecting him to break into “Siddin ad my pee-yano!”)

This mishmash of half-formed ideas (and that’s being generous, only because there’s no such term as ‘quarter-formed’) is not helped by appallingly frenetic editing. Every single scene is hacked to bits, with people jumping about everywhere as one-man band Winans shows us that he’s so clever he doesn’t need to edit coherently. And every single scene is also shot in varying degrees of soft-focus with washed-out cinematography that is then tinted sepia or blue or green or whatever (as the stills here ably demonstrate). Even the supposedly real-world scenes in John’s office are subjected to these staggeringly inappropriate and hugely obtrusive post-production effects. Used sparingly, this could have been effective - but slathered on like too much peanut butter it’s just overpowering and pointless.

I don’t think I’ve ever seen a film in which style so comprehensively sought to replace substance. At the end of the movie we have learned nothing about this fantasy afterlife-dreamworld-thing and we have learned nothing about any of our characters, apart from the fact that John was a bad daddy because he was obsessed with his work and neglected his kid. You know, that’s not exactly an original concept and it’s been done a million times before, almost all of which films were more enjoyable than Ink and less hard work to sit through. 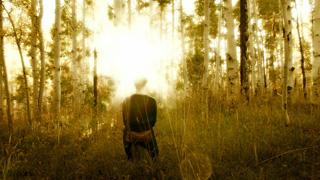 Only a commitment to writing this review prevented me from switching this off partway through because it really is unwatchable. It’s clear that Winans knows a vast number of flashy techniques but has absolutely no idea how to employ them to tell a story. It’s all just effects for effects’ sake, which leaves the viewer saying something to the TV that sounds very much like “Effects’ sake!”

There’s a germ of a good idea here, but that’s all it is. It could be that Winans has got this whole dreamworld-afterlife-thing worked out but has utterly failed to convey his ideas, simply because he has forgotten one of the most basic rules of fantasy. Which is that we need an outsider to identify with, a touchstone of reality, so that we can learn about this world as he/she learns. Somebody has to go into Narnia, someone has to travel to Oz. Ink reminded me very much of Dark City, a film which was complex and initially confusing but which gave us the Rufus Sewell character as a touchstone. (Of course, it’s also possible that Winans hasn’t got this whole dreamworld-afterlife-thing worked out and is just making the damn thing up as he goes along.)

Our only touchstone with reality here is Emma (an absolutely stunning performance by Quinn Hunchar which is the film’s saving grace) but she is a frightened little girl and says little and never really learns what’s going on. Children have been used as touchstones in fantasy films before - Time Bandits, The Adventures of Baron Munchausen and Pan’s Labyrinth spring to mind as Gilliam and del Toro are clearly strong influences on Ink - but they were slightly older and were inquisitively investigating the fantasy world, not just being dragged through it by a supernatural Noseybonk. 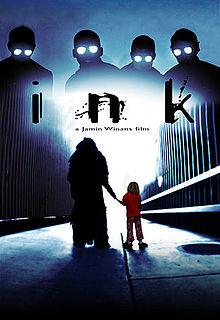 I was really looking forward to Ink and it let me down massively. Winans has just gone completely out of control in post-production - more of this, turn this up to 11 - but has skimped severely on an important part of pre-production which is, you know, actually having a coherent script. There’s just nothing here, once you strip away all the digital sound and fury signifying nothing. This is an hour and three-quarters of ‘look what I can do with my edit package’, a shambolic, unfocussed (often literally), pretentious piece of cinematic twaddle. Just awful.

Winans wrote, directed, produced, edited and composed the music (mostly ambient synth stuff). His wife Kiowa was the other producer, the art director and the costume designer. Cinematographer Jeff Pointer has also photographed documentaries about Trekkies (Earthlings: Ugly Bags of Mostly Water) and the Dalai Lama (When the Dragon Swallowed the Sun). Most of the actors have other credits but nothing that anyone has ever heard of. The unreadable end credit roll knocks a merciful five minutes off the actual running time.