But dear sweet Jesus, this one scared me. As I type this, it’s not quite 10.00pm, Mrs S is downstairs watching TV, I should feel calm. I’m a rational, sceptical guy who loves ghost stories in books and films precisely because I don’t believe that these things are real. But I’m glancing at every shadow because In Memorium has really, really unnerved me.

It’s a ghost story. No special effects, just story, characters and effective use of every cinematic trick available.

I always say: judge a film on how well it does what it sets out to achieve with what it has available. Writer-director (and executive producer) Amanda Gusack does an amazing job with comparatively little. One location, four actors. The whole film ostensibly compiled from security camera footage, putting it in the same subgenre as My Little Eye and Under Surveillance but, more importantly, justifying the shot-on-video look of the movie. A potential disadvantage, turned to an advantage. The film is a tight 73 minutes with not a second wasted.

Did I mention that it scared the crap out of me?

The set-up is that Dennis Wade (Erik McDowell: Wide Awake in Nothing) is a young man with terminal cancer and only a very short time left to live. Rather than extensive surgery and chemotherapy which would only increase his slim chances marginally, he has decided to move into a rented house with his girlfriend Lily (Johanna Watts, who was in two episodes of Enterprise) and cover the place in motion-activated security cameras and microphones. He’s a film-maker and will sort the footage daily on his computer; he has hired an editor to compile it into a feature after he dies. It will be a document of his final days.

What Dennis and Lily don’t expect is that the cameras and microphones will pick up something else, something indistinct which is only briefly visible because the camera images fuzz up into static when it’s around.

The house has been rented to various people over the past forty years. Could one of them still be there?

Counterpointed with this, and ultimately intrinsic to it, is Dennis’ relationship with his younger brother Frank (Levvi Powell). Dennis is the sensible, stable one, Frank is a wastrel with an attitude. The brothers get on, but there’s a frosty dislike between Frank and Lily. Ironically, unreliable Frank was the one who was with their mother when she died of cancer only a year or so earlier while Dennis, the older, estranged son refused to visit her bedside. We quickly learn that their mother was a dreadful, evil woman - but does that justify her eldest son abandoning her as she lay dying in hospital?

In this carefully, brilliantly paced film, the tension mounts as Dennis and Lily - and the audience - catch glimpses of something unnatural in the house. Dennis’ condition worsens, but in a way which doesn’t seem to make sense. False trails lead nowhere, truths are told, lies are revealed.

I don’t feel it’s an exaggeration to say that, at least in terms of the effect it had on this viewer, In Memorium can be mentioned in the same breath as The Haunting and Ring (original versions, of course). We see and hear virtually nothing and that is precisely what makes the little that we do experience so terrifying.

At the core of the film are three superb performances, thoroughly believable in both their interpersonal relationships and their reactions to the gathering horror. Mary Portser (Ed Wood, The Italian Job) provides excellent support as Mrs Sporec, the landlady. Cinematographer Mike Testin (who directed a version of Kafka’s The Hunger Artist) does an extraordinary job with the video, much of which was shot in low light. Some shots are washed out almost to monochrome, highlighting the red blood. (Yes, there’s blood.)

There’s no music but sound designer Gregory Hainer makes up for that with an eerie and effective soundtrack, especially the odd noises caaptured on tape; his CV includes Darkman III, Tales from the Crypt and an X-Men game. The excellent editing, credited to Diane Bruce and Jeff Rubin, is also a major contributing factor to this film’s success. (Producer Lydia Cedrone, incidentally, has an eclectic collection of credits which includes ‘costume accountant’ on Pearl Harbour and ‘post production auditor’ on Sometimes They Come Back... Again.) 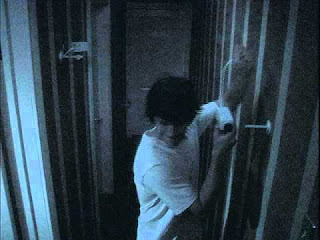 In Memorium is amazingly good in pretty much every respect. And Gusack’s superb direction never cheats. Every camera angle is locked off (except one sequence where Dennis unhitches a camera from its stand) and the same angles are returned to again and again. Yet the film never feels constrained by this self-imposed restriction.

This is an exceptionally well-produced, marvellously acted, brilliantly directed film - and if you watch it alone, you will be sleeping with the light on, if you can sleep at all.