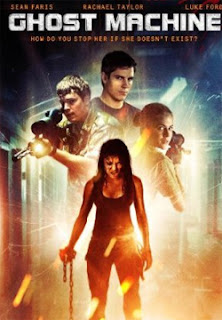 Not Ghost in the Machine, just Ghost Machine. Shot in the old Crumlin Road Gaol, Belfast at the end of 2008 with funding from Northern Ireland Screen, this odd little cyber-horror isn’t particularly terrible but nor is it particularly good. It’s competently made with an attractive and talented young cast and makes good use of CGI effects, but there is not a single ‘wow’ moment in the entire movie. It‘s difficult to react to Ghost Machine with anything except a big shrug.

The worst aspect of this film is undoubtedly the premise which is utterly nonsensical. Tom (Sean Faris: The Brotherhood 2) is some sort of techno wizard who has developed a highly realistic VR simulator thing which is being used by British squaddies for combat simulations. After hours, he and his likeable squaddie mate Vic (Luke Ford: The Mummy: Tomb of the Dragon Emperor) head off base to a disused prison to set up this self-same VR simulator for some games. Along the way they pick up Benny (Jonathan Harden: Ditching) and at the prison they meet up with ex-warder Iain (Sam Corry: Killing Bono).

Apparently this simulator works by placing a small number of electronic doohickeys around the building which then somehow recreate the entire structure within the computer. With VR helmets on their heads, the lads can run around the building they're in, blasting simulated enemy, without shifting from their armchairs. 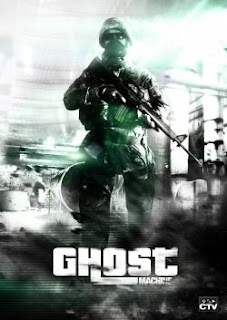 But the prison is haunted by the ghost of a female terrorist who died there while being tortured in the wake of 9/11 (seen in a 'nine years earlier' prologue under the opening titles). She somehow gets into the computer too and starts attacking the blokes, who suffer real injuries. Meanwhile Vic’s squaddetta girlfriend Jess (Rachael Taylor: Transformers, Charlie’s Angels redux), having gone for a solo run around the compound, then decides to jump on a motorbike and head over to the prison. For some reason. And she is followed by abusive Sergeant Taggart (Richard Dormer: Dark Touch, Puckoon - as a sort of low-rent Sean Pertwee). Also for some unclear reason.

It turns out that Tom has set this whole thing up to try and capture the ghost which he knew to be there and is unconcerned about his friends’ deaths. But really, the plot is bollocks of the highest order just designed to set up scenes of the spooky ghost lady, supernaturally armed with a long chain, stalking and attacking the main characters. Motives and motivations are in short supply and although Jess and Vic do start demanding answers from Tom towards the end, that doesn’t cut it because this is the sort of convolutedly bizarre set-up that anyone with any brains would have questioned beforehand.

It’s quite an international cast for a small British production. Faris is the token Yank, Ford is Canadian but adopts an Aussie accent, Taylor actually is Australian but hides her accent, and Hatla Williams, who plays the ghost, is an Icelandic actress (real name Halla Vilhjálmsdóttir) who presents that country’s version of The X-Factor! Token other Yank Josh Dallas (The Descent Part 2, Thor) is the voice of Tom’s accomplice. For some reason.

Director Chris Hartwill mostly makes adverts; he has helmed episodes of The Hunger and Numb3rs but this is his only feature. The script is credited to Sven Hughes (from Oxford) and Malachi Smyth (from Derry), each of whom has written various shorts. Hughes works as a ‘strategic communications consultant’ (ie. speech-writer) for “international clients including Prime Ministers, major multinationals and various militaries.” 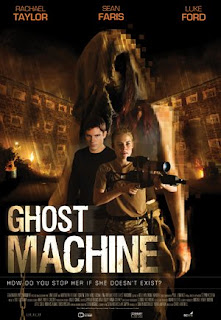 This was the second BHR feature from producer Simon Bosanquet and Mark Huffam who also produced Freakdog aka Red Mist; their solo credits include Nuns on the Run, The Revengers’ Comedies, Thunderbirds, Johnny English and The Life and Death of Peter Sellers. DP George Richmond has camera credits on Quantum of Solace, Children of Men, Seed of Chucky and I Still Know What You Did Last Summer. The sparse but gory prosthetic make-up was provided by Clare Ramsey (Doctor Who, Mutant Chronicles, WAZ, Game of Thrones) while costume designer Hazel Webb-Crozier worked on BHR entry Wilderness and IHR entry Grabbers.

The daft premise of this daft film is the sort of thing that Fred Olen Ray might have got away with in the 1980s but simply doesn’t pass water in the late noughties (Ghost Machine was released on US disc in December 2009 and in the UK the following April). This is a thoroughly middling, instantly forgettable, frankly bland film which passes the time for an hour and a half if you’re undemanding, but it makes no attempt to do anything interesting, new, different or memorable so it’s really difficult to see what purpose it serves except to give a commercials director and a speechwriter a feature credit.