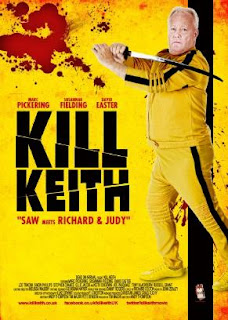 I don’t know which is the more surprising fact about Kill Keith: that it got made or that it’s actually very good. Both seem unlikely.

On seeing the trailer, most people assume it to be some sort of spoof but no, as one surprised blogger wrote just before its release, “Incredibly, this is a thing.” I must admit that when I first saw the advance poster artwork on the DOA Digital site a couple of years ago I assumed that it was something doomed to spend forever in development hell. A good idea, a wouldn’t-it-be-great-if, but not a serious cinematic proposal. I mentally lumped it in with horror comedy Frank in Staines Monster rather than obviously serious projects such as Ellie Rose, the retitling of Tristan Versluis’ Not Alone, which is still awaiting release.

Another surprising fact about Kill Keith is that it is, at heart, a romantic comedy. The Tarantino-esque poster of Keith Chegwin in an Uma Thurman-style yellow track suit suggests an action movie and it screened at the 2011 British Horror Film Festival as a horror picture (obviously) but it is first and foremost a comedy, with a will-they-won’t-they couple at the centre. It is also a horror movie, I’ll give you that, in that the plot revolves around a series of gruesome, gory deaths. And just for good measure. it also has aspirations to be a superhero picture, an action movie and a film noir. 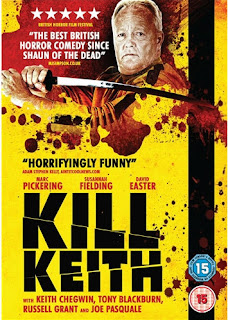 (Just in case you think that’s damning with feint praise, like calling this ‘the best D-list Celebrity Psycho Slasher Romcom you’ll see this year’ let me just remind you that there have indeed been several British horror comedies since Shaun, including Freak Out, Evil Aliens, The Cottage, StagKnight, Lesbian Vampire Killers, Doghouse, The Vampires of Bloody Island, Stag Night of the Dead and Attack the Block. Some are good, some less so, but none have made me laugh like Kill Keith.)

The film is based around The Crack of Dawn, a fictitious breakfast television show hosted by the eponymous Dawn (played by the impossibly pretty Susannah Fielding, who was in Noel Clarke’s 4.3.2.1 and the ‘WW2 Daleks’ episode of Doctor Who) and the suave Cliff (played by Family Affairs/Brookside’s David Easter as an arrogant slimeball of the first water). Cliff has announced his decision to leave and a secret shortlist of replacements has been drawn up: former DJ Tony Blackburn, comedian Joe Pasquale, astrologer Russell Grant and the irrepressible Keith Chegwin - all of whom play themselves with absolutely gleeful abandon. Chegwin is already a regular on The Crack of Dawn, out in the street surprising people in their homes in a segment called Cheggers Knocks You Up.

Among the staff of ‘Iam-TV’ is studio runner Danny (Marc Pickering: Sleepy Hollow, The Task), a likeable, enthusiastic-but-clumsy, gawky young chap who has dreams of one day being a TV presenter but is still stuck on the lowest rung of the industry, in charge of ‘coffee and arsewipes’. Danny carries a torch for Dawn and has a lifesize cut-out of her in his bedroom (in his mum’s house) which he swiped from the studio reception. Dawn herself is on the rebound from an abusive, testosterone-addled boyfriend known as ‘Rob the Knob’ and there is a great chemistry between Fielding and Pickering which makes an audience desperate to see them somehow get together, which is what any good romcom should have.

What very few romcoms have is an unidentified psycho in a boiler suit, only ever shot from the chest down, who brutally (and hilariously) murders a TV exec for the secret shortlist and then sets about shortening it even further. If you’ve seen the trailer, you’ll know that Pasquale and Blackburn both end up gruesomely despatched. Who could be responsible for these atrocities, and can they be stopped before they... Kill Keith?

There are plenty of candidates. Cliff himself is a thoroughly unpleasant, supercilious twat, convinced of his own greatness and utterly obnoxious to those around him, especially Danny. Perhaps it’s recently employed studio cleaner Andy (the ubiquitous Simon Phillips: Jack Says, The Reverend etc) who seems to have a lot of questions. Maybe it’s vampiric quizmaster Brian - a wonderful performance from Stephen Chance (The Shadow Within) combining gothic eccentricity with genuine pathos - who receives constant instructions to further dumb down questions that wouldn’t tax a five-year-old.

In casting around for a killer, as one must perforce do in a whodunnit, however gory, the possibility cannot be discounted that either Danny or Dawn might have a dark side, or could it be one of the studio’s various other employees, or even somebody connected with one of the celebs themselves? Perhaps it’s Rob the Knob?

As the bodies pile up, Danny and Dawn move hesitantly closer together, a series of finely judged comic misadventures constantly letting down Danny’s attempts to impress the love of his life. Part of his problem is that he is a dreamer and there are several quite wonderful Walter Mitty-style daydreams scattered throughout the film as Danny’s alter ego ‘Danny Danger’ becomes a gun-toting Rambo, a golden age superhero and a tough-talking 1940s ‘tec whose car comes equipped with its own dodgy back-projection. 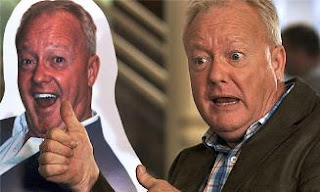 Throughout all this we have the quartet of celebs themselves, all of whom worked for free on this low-budget production (other celebs were approached, including Vanessa Feltz, but were unable to fit into the Kill Keith shooting schedule). All four are consummate professionals and helpfully already have a broadcast persona. When Russell Grant or Cheggers appears on TV they are already a version of themselves. Blackburn, as an old-school DJ, is very much a self-made media construct. And as a stand-up comedian Pasquale is playing a role every time he steps on stage. For this film, they have no problem just slightly exaggerating themselves, which works perfectly as all four are already exaggerations. Then again, it’s clear they don’t mind playing against type and there’s some magnificent swearing on show here.

It is also worth noting that Tony Blackburn is treated slightly differently to the other three, resulting in one of the film’s funniest scenes, featuring my pal Frank Scantori (Room 36) at his skin-crawling best in a small but gloriously funny role.

The romcom plot and the psycho killer plot both build towards Cliff’s final show, on the morning of Halloween, with the set full of pumpkins and plastic bats and the hosts in fancy dress as vampire and witch. There is a brilliantly original, almost Hitchcockian ‘ticking clock’ as our hero races to save our heroine, the two plots finally colliding in one unforgettable finale.

The whole film looks fantastic, utterly belying its small budget, and one of the main things that carries the movie is a cast which, right down to the smallest bit-part, never puts a foot wrong. Iain Rogerson, who was one of the ex-commandos in The Scar Crow, turns in a particularly good supporting performance as the studio’s security guard. 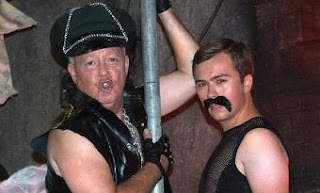 Cinematographer Luke Bryant makes his feature debut here after shooting some impressive shorts including Human Assembly, Deathless and an adaptation of Michael Marshall Smith’s short story ‘Later’. Production designer Danny Rogers (The Hike, Jack Falls) does a great job with not just the studio and domestic sets but also the hyper-realism of Danny’s daydreams. Editor Richard Colton (Airborne, Strippers vs Werewolves) also deserves praise as does John Zealey whose renditions of appropriate songs make for a beautifully sympathetic soundtrack.

Make-up effects designer Kristyan Mallett has amassed a hundred or so credits in the few years since he started as a trainee on Harry Potter 3 including WAZ, The Cottage, Doomsday, Eden Lake, Mutant Chronicles, Strigoi, Heartless, The Reeds, The Holding and The Inbetweeners Movie. The gore which he provides for Kill Keith is just gruesome enough to be funny without tipping over into silliness.

The final surprising thing about Kill Keith is that it is the second feature from Andy Thompson - as it could not be more different from The Scar Crow. Not just in its tone, style, subject matter and approach but also in having a tightly constructed, narratively satisfying script rather than the previous feature’s enjoyable but ultimately plothole-riddled story. Pete Benson, who co-directed The Scar Crow, restricts himself to writing duties here, working with Thompson and with producer Tim Major from an original idea by Andy (who already knew Chegwin slightly before starting on the project). Freak Out director Christian James is credited as associate producer.

Finally, a word must be said about Chegwin himself who already has some remarkable, little-known credits to his name. This is actually his second British horror film, or even his third if you’re of the school which considers Polanski’s Macbeth (in which young Cheggers plays Banquo’s son) a horror movie. Personally, although it’s a great version of my favourite Shakespeare play, I don’t think of Polanski’s film as horror; the supernatural elements are rationalised away and it’s not as gory as people seem to think it is. Be that as it may, Cheggers certainly does get a horror credit for narrating the Fun Dead zombie game show seen briefly on TV in the epilogue of Shaun of the Dead. 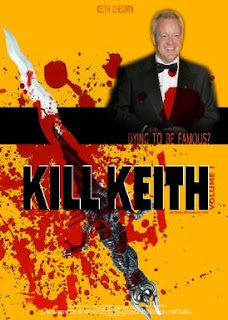 In his pre-Swap Shop acting days, he was also in a couple of episode of The Tomorrow People and played the title role in Robin Hood Junior, long before a different actor with initials KC donned the Lincoln green tights.

Whatever you think of Keith Chegwin, Kill Keith will make you see him in a completely new light. This could be the start of a whole new career for the man, a reinvention of his cheesy image in the light of his incredible performance as the epicentre of this film.

It will be a sod to sell in overseas territories, mind.