Holy discovery, Batman! Here’s conclusive proof that, no matter how many extraordinary films are catalogued, described and eventually released on DVD, there are always plenty more that nobody has ever heard of.

I thought that I knew about all the famous, copyright-skirting Asian takes on western culture: the legendary Turkish Star Trek movie, the Indian versions of Superman and Star Wars. Batman, Spider-Man and El Santo rampaging through Ankara... But here’s something new. Could it be (I wondered, as I e-mailed my credit card details halfway round the world) that James Batman is some sort of unholy cross between Batman and James Bond?

The representations of Batman and Robin are based on the 1960s TV series, which must have been as popular in Manila as it was in Manchester and Manhattan. The Caped Crusader’s costume is reasonably accurate, except for a striped cape and an odd symbol on his chest in place of the usual bat. It’s either some weird Chinese pictogram or a silhouette of a stripper - I honestly can’t tell! The bat symbol is correct however on the tailfins of the (pretty good) Batmobile. And the Boy Wonder’s costume seems to be completely accurate.

James Bond meanwhile looks as much like Sean Connery as I do and has an awful taste in jackets and hats.

Oh, and they are both played by the same actor. Because obviously the film wasn't weird enough already. 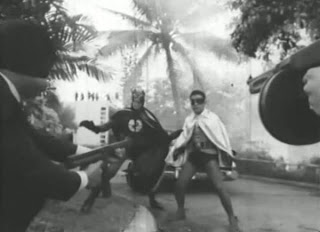 The movie kicks off with a meeting of some sort of council or government (did I mention: it’s in Tagalog and therefore completely incomprehensible?), which is visited by an evil, Fu Manchu-style warlord. He threatens to detonate an atom bomb - somewhere - and evidently can also fire some sort of stun-ray from his fingertips. Bizarrely, we never see him again after this prologue.

Let’s make it clear. This is not a serious attempt to dupe Filipino audiences into thinking that the stars of Batman and Dr No have suddenly been transplanted to the Philippines. It’s a comedy, a spoof. The Batman TV series was already a spoof, so that’s all right, and although this is meant to be James Bond, the character is more like the self-parodic James Coburn in Our Man Flint.

The actual plot? Goodness knows. Find me someone who speaks Tagalog. Actually, the film contains two sorts of scenes: talky scenes and fights, with the latter predominating. And they’re not bad fights either. Batman and Robin versus the bad guys; James Bond vs the bad guys, then everyone pitching in (as you’d expect). There are some decent martial arts moves on show here and imaginative (for the time) use of buildings and furniture. These are properly choreographed fights and are properly shot too, with reasonably long takes so that we can see what’s actually going on. Clearly the action is more influenced by Hong Kong than Hollywood. 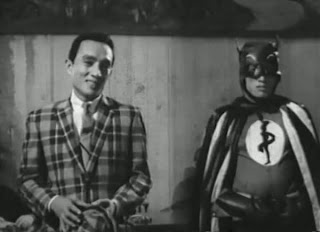 The villains are an odd bloke in a hooded cloak with metal plates on his head (surely he’s not meant to be Doctor Doom from The Fantastic Four, is he?) plus a young chap with sunglasses who has a spiked ball instead of his left hand, and carries a heavy machine gun around with him at all times. Oh, and the Penguin! (And one of the minor characters turns out to be Catwoman later on.) Metalplate, Spikeballhand and the Penguin command their masked minions from a stage dominated by a giant hand - which we later see flex its fingers and shoot a ray, a bit like Fu Manchu did in the prologue. One of the oddest things is that, towards the end, when the Dynamic Duo and 007 (and his Bond babe) are held captive by the Penguin and his cohorts, they are rescued by a good-looking young man with a machine gun. I don’t know who he is - but we’ve never seen him before! Perhaps it all makes sense if you can understand the dialogue.

Has anybody seen this before? Several sources list a 1967 Filipino film called Batman Fights Dracula, although I can’t locate anyone who has actually seen it. Stephen Jones’ Essential Monster Movie Guide gives cast and production company and it’s clearly unrelated to this film. Pete Tombs’ Mondo Macabro mentions something called Alyas Batman and Robin in its Filipino chapter, but that’s a 1990s film. Looks like I’ve stumbled across something new.

So where did I find this rarity, which has remained uncatalogued these 37 years? I found it at Kabayan Central, a company which has an archive of old Tagalog movies. For a quite reasonable fee, they will make you up a VHS copy from the only surviving master. The print quality isn’t great - James Batman is very scratchy and the sound is all over the place - but when something is this rare, that’s a quibble. The simple matter is that James Batman turns out to be a genuinely entertaining collision between two icons of global popular culture, with lots of entertaining if slightly silly fights, and some amusing visual gags (see Batman dispense his lunch from his utility belt!). 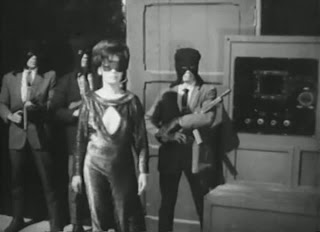 With a title like this, it was a reasonably good bet what sort of film this would be. But what undiscovered gems lie behind those other enigmatic titles: Espada ng Rubitanya Mga, Magic Bilao, Nagkita si Kerubin at Tulisang Pugot, Tansan vs. Tarsan? (The only one I have identified so far is Dugo ng Vampira, which is the original Tagalog version of Creatures of Evil.)

There’s a lot to discover here, if my credit card can stand it.