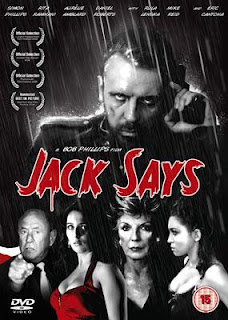 Jack Says is a commendably slick and well-produced British noir thriller that doesn’t quite work, which is a shame.

Co-director Simon Phillips (Jesus vs the Messiah, The Rapture, Idol of Evil) stars as Jack, introduced in a black and white prologue, tied to a chair and being threatened by ‘the Guv’nor’ (professional Londoner Mike Read in his final performance). When Jack comes to, he is battered, bloody and next to the Guv’nor’s dead body, in a different location (and in colour). He has no idea how he got there but worse than that, he has no idea who he is - nor who the dead body is that’s next to him.

All he has to go on is a credit card and a polaroid of a woman’s breasts which has an address in Paris written on the back. So he heads to the French capital, although it does occur to me now to wonder how he is able to use the card since he would need to remember a PIN (or a signature). Also, they don’t actually make Polaroid cameras any more, although I suppose it might be an old photo.

Jack’s lack of memory means he has no idea whether he killed the dead bloke but on the assumption that people might think he did - and he clearly has no alibi - he goes on, effectively, the run. Except that the British police find a driving license or some similar ID at the scene and subsequently track his credit card usage to Paris. Apparently they know Jack of old and although the circumstantial evidence points to him, Detective Edwards (James Frail: Dial H for Housekeeping) is not convinced. Charlie Palmer (Andrew, Chasing Emily) appears to have lots of fun playing Dr Matt Poulton, a surprisingly realistic forensic expert who demonstrates that the Guv’nor was shot somewhere else and the body transported afterwards by at least two strong people (Mike Read being not exactly a small bloke). Edwards sets off to Paris in search of Jack.

Meanwhile our hero makes his way to the address on the photo, unsure what he will find but assuming it to be a woman. It turns out to be Erin (Rita Ramnani, who was Arwen in lavish LOTR fanfilm The Hunt for Gollum), an ex-girlfriend who still carries a torch for him but who points out that the tits in the photo aren’t hers (it’s not explained why her address is written on a snap of someone else’s jubblies). 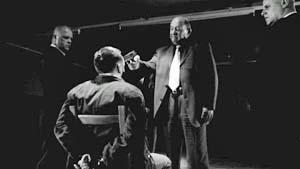 There is some initial discomfort, largely due to Erin’s doubt over Jack’s claim to have no memory although the fact that he is filthy and blood-caked doesn’t help (in fact he is still bleeding, which seems a tad unlikely if enough time has passed for him to get to St Pancras, buy a Eurostar ticket - without a passport? - travel to Gare du Nord and then somehow track down a specific address in a city he doesn’t know). But gradually the two settle into a happy, comfortable relationship, with Jack realising that, whatever he is running away from, he is better off in Paris with Erin.

While Erin goes out to her (unspecified) work, Jack wanders into a bar and watches a singer known only as Girl X (Aurelie Amblard, the only French person in the principal cast). She has her own problems, primarily the unwanted attentions of an unctuous, lesbian gangster, Garvey (Rula Lenska), whose two cronies are an unnamed, sharp-suited, white chap (Daniel Roberts) and a beefy, black fellow called Twinkle (Danny Idollor: Jesus vs the Messiah).

Lenska’s genre credits include one Doctor Who story, an episode of Space:1999, as-yet-unreleased puppet Bond spoof Agent Crush, 1990s kidcom Kappatoo, the radio series of Hitchhiker’s Guide - and Queen Kong of course. (Interestingly, the part was originally given to James Kavaz (HellBride, KillerKiller) but was recast when he passed away suddenly in February 2007. The only other film I can think of where a supporting role was recast from male to female like this is 24 Hours in London where the Lorelei King role was originally intended for Antonio Fargas.)

Jacks’ sense of honour leads him to become involved with this malarkey which proves fatal for Erin, leading Jack to accept Girl X’s request to murder the odious Garvey. But as with all the best thrillers, not everyone is telling the truth and more fatalities occur along the way before a ‘twist’ revelation in an epilogue and the revelation of who did kill the Guv’nor.

Jack Says is well-made: most of the cast are excellent, it’s smartly directed and cinematographer/co-director Bob Komar (director of the 2006 contemporary Measure for Measure which shares various cast and crew with this film) does a smashing job with both the colour and monochrome photography, which has been neatly spliced together by editor Paula Baker (whose TV work includes Demons, the Minder remake and Masterchef!). There is some neat dialogue and some interesting visuals (especially a death scene near the end) plus a cameo by a bearded Eric Cantona as a Parisian bar-room philosopher.

But one word that sadly can’t be applied to Jack Says is ‘satisfying’. It just doesn’t fit together in a neat way. Most egregiously, there is no connection whatsoever between the events in London and those in Paris. One watches the film expecting that someone has set Jack up, that in helping Girl X he is falling into a trap orchestrated by someone connected with the Guv’nor - but he’s not. The London plot resurfaces regularly as Jack has monochrome flashbacks to what happened, most of them involving a woman who was present when the Guv’nor was pointing a pistol at him, but it never integrates in any way with the events in Paris.

This woman is Natalie (Ashley Walker) who will prove to be significant... but only in the sense that Jack eventually remembers her significance. The actual revelation of who killed the Guv’nor is, again, not satisfying. Even the aforementioned twist fails to satisfy because, while it is unexpected, it doesn’t illuminate in any way what has gone before except to explain why Jack was tied to a chair with a gun pointing at his head back in the prologue.

This film is interesting, exciting, often stylish - but it’s not clever. Thrillers should be clever; it’s what distinguishes the genre from run-of-the-mill crime movies. The lack of revelatory intrigue in Jack Says is, at one and the same time, superficial and fundamental. And its effect on the film as a whole can be viewed either way.

Also, halfway through the film there is, it must be said, the biggest editing flub that I have seen since Haunted Prison. Jack goes out to buy something for breakfast, walks back through the bright sunshine of a Paris morning, finds Erin dying, leaps out the window when the gendarmes come knocking on the apartment door... and runs away into the night. It’s one of those cock-ups so staggeringly basic that you can’t help rewinding and checking it to make sure you haven’t missed something. I don’t know what happened there.

Various ‘heavies’ are played by Forbes KB (A Day of Violence, Kung Fu Flid), Christopher Fosh (A Day of Violence, Mutant Chronicles), Rob Talbot (Call Me a Psycho, The Butterfly Tattoo) and Robert Stone (who seems to have built up an impressive CV by playing bouncers, prisoners and bodyguards). A veritable army of producers includes twelve associate producers, eight executive producers, a solitary co-producer and seven common or garden producers. Directors Simon Phillips and Bob Komar merge into a sort of gestalt entity in the credits which call this ‘a Bob Phillips film’. 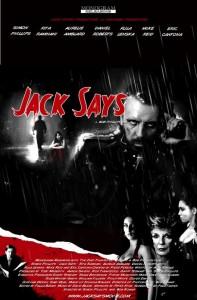 There is a rather bizarre writing credit of ‘written by Alan Ronald, screenplay by Paul Tanter’. Al wrote several drafts of the script and was even attached to direct at one point but various changes meant that Phillips and Komar took over direction while further drafts of the script were written by Tanter - hence the odd credit. Derbyshire-based composer David Beard (The Opening, Catharsis, Claw) wrote the score although Wikipedia is convinced that it was written by the Australian volleyball player of the same name.

Jack Says was released on DVD in 2008 by 4 Digital Media, the disc including some deleted/extended scenes, a Making Of, a report on the premier and an ‘Eric Cantona gag reel’. A graphic novel prequel called Jack Said was published and is allegedly in development as a film with a possible third instalment, Jack Falls, also misleadingly listed on the Inaccurate Movie Database.