Is My Palm Read 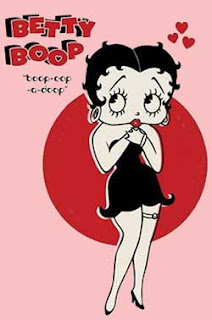 I recently picked up a DVD (volume one of two) of original Betty Boop cartoons, released in the UK by Delta. And what a delight to reacquaint myself with the little minx. Betty is one of those characters who is sufficiently iconic that everyone recognises her, but when did you last actually sit down and watch an original 1930s Betty Boop cartoon?

Produced by Fleischer Studios, who were serious rivals to Disney in those pre-Snow White days, the Betty Boop cartoons were usually deeply surreal, with inanimate objects coming to life temporarily and people and things changing shape and context almost on a whim. As well as the sheer sexuality and sassiness of the main character, there’s a joy in the possibilities of animation as a medium and, inherent in that (I feel) is a hint of darkness and danger. And sometimes, as in this instance, these little films are just plain weird.

Is My Palm Read, apart from being a corking title, is a great little early sound cartoon. It co-stars, as do many Betty Boop cartoons, two other Fleischer characters, an anthropomorphic pup named Bimbo (of course, Betty was a canine herself in her earliest appearances) and the redoubtable Koko the Clown. We see these two, in the opening sequence, bowing down before some unidentifiable shadows on a curtain. They are inside a building with a huge neon sign outside advertising the mysterious psychic powers of ‘Professor Bimbo: sees past, present, future’.

Betty arrives, looking surprisingly demure for this stage in her career, in a long dress and wide-brimmed hat. The doorbell consists of a cat with his tail through a hole in the wall who yells when his tail is pulled. Koko checks the visitor through a peephole which he has to move around the wall several times before finding her. He sticks his head through his legs and announces “Miss Betty Boop!” This is the cue for Bimbo to don a turban and fake beard.

Outside, an entrance hall unfurls down the front of the featureless wall and when Betty steps inside it turns into an elevator (although, as we have seen, Bimbo and Koko are also on the ground floor). She then enters by means of a Betty-shaped hole in the wall which is torn open by the doorbell cat.

We are about 45 seconds in and already this is bonkers.

Bimbo has a crystal ball in which we see an ocean liner being tossed and thrown at sea, eventually turned upside down by two waves-as-hands. All the passengers fall out and one becomes separated, adrift in a lifebelt. We zoom in to see that it is Betty. She makes it to an island where she quickly dons a halter top and hula skirt and sings ‘All by Myself in the Moonlight’.

There is a straw hut on the island, with two palm trees which lean over to grab our heroine and throw her into the hut, which is home to a bunch of ghosts (one has a bone in his hair, one wears a top hat, several have buck teeth). A spider spins bars across the window so Betty writes ‘help’ on a piece of wood, but one of the ghosts grabs it and throws it onto the log fire. (Why would you have a blazing log fire on a tropical island?)

Fortunately, this causes the smoke rising from the chimney to spell out ‘help’ which is seen by Bimbo, passing by on a mule (with the ‘Sailor’s Hornpipe’ on the soundtrack). He rescues Betty and they race off through the jungle, eventually making their escape in a small, squirrel-powered paddle-boat.

Back in what passes for reality, Betty says, “My hero!” Bimbo throws off his beard and turban and says, “Betty!” and with delight and surprise she responds “Bimbo!” (so I guess she missed that huge neon sign). A ghost promptly appears from under the crystal ball and chimes in “Bunko!”(?). He rips off Betty’s hat and dress, and underneath she has the hula skirt ensemble.

Bimbo and Betty race off as more ghosts swarm out from where the crystal ball was. Koko is entirely forgotten by this point as they are back in the jungle, making one wonder whether these scenes were originally intended to follow on directly from the previous chase. The ghosts get pelted with cocoanuts from a rebounding palm tree (the flexibility of palm trees seems to be the basis for quite a few gags, in fact) and eventually they all pile through a hollow log which leads out over a chasm, with Bimbo and Betty scrambling to safety and the ghosts all plummeting out of harm’s way. The end.

Absolutely insane. Had this been made 30 years later, people would be hailing it as a drugged out classic. (Mind you, there was an awful lot of drugs going around Hollywood in the 1930s...) The five minutes of Is My Palm Read (like I say, a great title, although come to think of it, no palm-reading actually occurs) are jam-packed with inventive visual gags which leave one in no doubt that this isn’t the real world. A fair amount of these gags involve violence inflicted by non-living or inanimate objects such as trees and waves. And thinking about it a bit more, although Bimbo never reads Betty’s palm, their adventures on the tropical island certainly do involve a lot of palm trees.

According to a synopsis on the Big Cartoon Database (which cites an alternative title of Professor Bimbo) there are three risqué gags missing from this print - although curiously this runs to the exact 5’12” quoted by the BCDB. And indeed there do, on closer inspection, seem to be three slight jumps in the action where the following things should be: when Betty first enters the room, the lights are arranged so that her silhouette shows through her (atypically demure) dress, marking out Bimbo as a sly rogue; before the crystal ball reveals the ship, it shows Betty as a young girl, naked in the bath; and when Betty arrives at the island, she removes her soaking dress before constructing her own hula skirt. 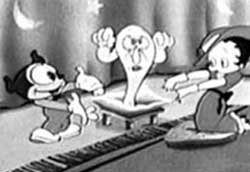 Even with these snips, this is a wildly entertaining short and I will certainly be adding some more of Betty’s more fantastical adventures to the site in the future.

Apart from the Fleischer brothers, the only other credits are for animators David Tendlar and William Henning.