I interviewed costume designer Barbara Lane in Slovakia in August 2003 on the set of the Hallmark Frankenstein. 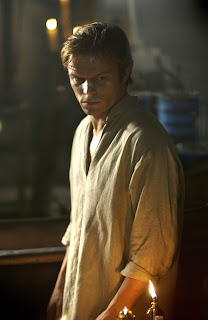 Tell me a little about your background.
"I used to do Doctor Who. I used to make the costumes in my office at the BBC. Whenever I do any funny shows like Dungeons and Dragons or Monkey King, I say, ‘It’s all right, I did Doctor Who, I know all about these things.’"

When did you work on Doctor Who?
"1971, possibly, to about 1976. Pertwee and Tom Baker. I did quite a few with Tom. In fact, when we did Dungeons and Dragons in Prague the director who was Canadian - they got Doctor Who in Canada - said, ‘Could we get Tom Baker in?’ So we got Tom in to do a part."

How did you get involved with this?
"Somebody offered me a job! Because I work in Prague a lot, I’ve done nine films in Prague, and they obviously wanted to use as many local crew as possible. I wanted to do it, and they were nice people. I only work with nice people."

Have you done anything for Hallmark before?
"Yes, I did Monkey King in Prague but I don’t think it was because of that that I got this."

How does Bratislava compare with Prague?
"The things we made in Prague, you can’t get a lot of stuff in Prague, a lot of people import stuff. Here it’s totally different. We’ve got one guy that sews for us here who’s great. There’s no resources in the costume line except what’s at the studio and if you don’t happen to be doing that look, it’s not there. But I have rented peasant clothes and stuff from here. You go around and back to Prague to get stuff, and the rest of it you have to make."

What’s the biggest challenge on this shoot?
"The biggest challenge on any mini-series is getting enough stuff because it’s like two or three feature films at once and no scene lasts more than half a page. Dozens of sets, very, very intensive. For me, it’s just the challenge of getting everything there and having it right. The period costume side’s fine because I know the periods very well, after doing it for ... a lot of years. Also we’ve had good producers and good actors which is very important when you’re working at this pace, because the pace is very, very hard. When Luke Goss arrived and I’d done all his stuff, he was very happy with it. We were obviously on the same wavelength without even talking. I just saw him as being a guy who had picked up stuff here and there, rationalised how he came to be where he is. In the book, where he leaves, he goes into the woods and just gets stuff. So I put it all together and made him what he looks like now. It worked fine." 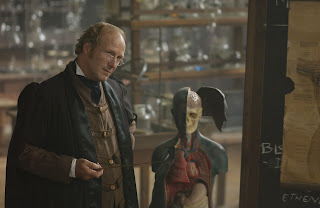 For Frankenstein and his family, are you creating some fancy clothes?
"No, actually. It’s never done in a realistic manner, and I like to do clothes, not costumes. So I tried to make them look as though they live in the equivalent of an English country house, and we know what they look like: they’re a bit shabby, they live in their clothes, they don't look as though they’ve been to the hairdressers every morning."

They are meant to be a relatively poor noble family.
"His father’s a lawyer. They’re not broke, but people don’t show their wealth like they do in a vulgar way. I won’t go into my stories about people showing their wealth but I’ve come across it quite a lot in the programmes I’ve done. So I’ve tried to make them look as they would be, a real family, living in a house and having people round them, and doing things that normal people do. I’ve not made them unacceptable to me and the audience. I hope people know who they are by what they’re doing and what they’re looking like. That’s all I can do, really."

What about the Arctic scenes?
"Funny you should mention that. I’m working on that as we speak. I haven’t got a lot of furs, and between now and the weekend I’ve got to work out how I’m going to make them. Because they were actually whaling fisherman that he took on the boat, so they’re a mishmash. And I think that’s what they want. They don’t want them to look as though they’re all in Eskimo clothes. I’m going to start making some stuff in the next two days because we shoot in the next few days."

It sounds like you’ve done a lot of research.
"Oh yes, you read the novel. You can’t do this without knowing what you’re doing. And I wanted to do it! I don’t think it’s ever been done in the way that it should be done."

Are you liaising closely with Kevin Connor?
"I do see him occasionally. He’s good, he’s wonderful. I think everybody would work with Kevin over and over again because he’s a really nice guy. Things don’t always go right but if 99 per cent of it goes right that’s okay with me."

Are you based in Eastern Europe now?
"No, but I seem to be able to work there comfortably. I only work for people I know. I don’t have an agent or any of that. Producers I know, directors I know, I work with them. That’s what I do."

In designing the costumes, did you have to go through a lot of versions?
"No. I have been doing it a while and I do know what they look like. We’ve never had a meeting about the production, ever. I kept saying: when are we having a production meeting? Never."

I expect they left you to get on with it because of your experience.
"Or there wasn’t time or something, I don’t know. Also, you don't know until the actor turns up what it’s going to be like. Nobody really knows until it’s put on the actor anyway. Donald Sutherland comes on the 11th and shoots on the 12th!"

Do you know what size he is?
"Yes, I’ve spoken to him, and I’m knitting his sweater for him. Which is going to be a front and a back because it would be too hot with the sleeves. We’re all knitting scarves and stuff, there’s a cottage industry going. I never considered Frankenstein as horror, I suppose it is horror." 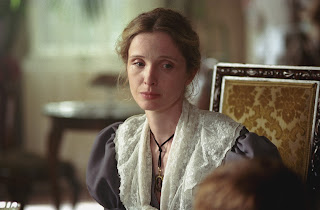 Well, it’s a horror icon, but the actual story is a gothic romance.
"Absolutely. They were entertaining each other, Lord Byron and Shelley. It’s just an idea that came through. Obviously when you read it, you know she didn’t have much information about other things going on in that period. Switzerland was a protestant haven, they had a different look and all that. But you’re not going to tell an audience that: this is why it looks so boring, because they were all nonconformists."
Posted by MJ Simpson at 20:38