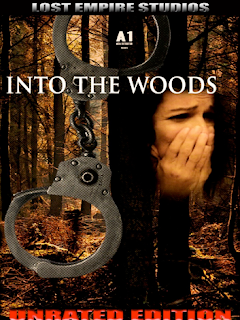 At first, Into the Woods looks like it will be another unpleasant ‘psycho abuses woman in isolated spot’ study in sadism, like Adam Mason’s Broken but without the production values. However, it turns out to be considerably more than that (though it is still quite unpleasant).

Phil Herman regular Nancy Feliciano stars as Danielle, initially seen taking a dip in the sea, wearing bikini bottoms and T-shirt. By the time she steps inside her house, her hair is completely dry and beautifully frizzy. She changes from her (equally dry) T-shirt into a diaphanous shortie nightie for no apparent reason as she only wears it for five minutes, while watching a cheap horror film (apparently also made by Herman, although I don’t know whether it’s specially-shot footage or from one of his other features). Then she strips off the nightie and the bikini and goes to sleep naked, without even a blanket or sheet. Must be hot where she is.

An unidentified naked man enters her room. She wakes up, recognises him and cowers in terror…

…and then comes to, naked, lying on a towel in some sort of abandoned concrete building. In, as the title correctly points out, the woods. Danielle finds a skirt, a top and a deeply impractical pair of high heels and goes exploring along a path until she comes across a set of wooden steps rising to the top of a steep hill. Wherever she is, she’s clearly not in the middle of nowhere. These are well-maintained steps with a viewing platform at the top and although the information board thereon has been vandalised, one would expect her to examine it for some clue as to her location. But she doesn’t. On the viewing platform is a bag with some more practical clothing including shorts and sneakers, into which she changes, plus a very long, detailed, anonymous threatening note which Danielle reads out aloud, in full, in one of the least subtle infodumps I have ever seen. The note informs her (and us) that she has been drugged and must now solve a series of puzzles. This raises the prospect of some sort of Saw-like tricks but in fact these puzzles never materialise. 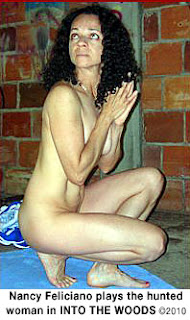 Meanwhile, the viewer thinks how fortunate it is that Danielle decided to laboriously climb those hundred or so steps - in heels! - even though she makes no attempt to look for suitable landmarks once she’s at the top of the hill. Of course, if she had just continued along the path, she wouldn’t have found the note and the whole scheme would have collapsed. (Reminds me a bit of the flaw in Die Hard 3 where the bad guys’ complex scheme is entirely dependent on Bruce Willis being unexpectedly rescued by a stranger before being killed by enraged inhabitants of Harlem.)

What is really confusing is that next time we see Danielle she’s waking up again, in a different part of ‘the woods’, wearing a jogging suit and with her frizzy hair suddenly straight. A plastic carrier bag on a tree branch contains a much shorter note than the previous one, but with the same sort of stuff about drugs wearing off etc. This bugged the hell out of me and for quite some time I assumed that this was a different woman, perhaps Danielle’s sister.

When Danielle finds herself again at the foot of those wooden steps, she realises that she has been walking in circles for two days so she climbs the steps again. This confuses the viewer still further as there is no indication that she has been in the woods for that long. She doesn’t seem tired or hungry or bedraggled; in fact it looks like she’s been to the hairdresser. A few yards from the hilltop viewing platform she takes a pee in the bushes and then hears a mobile phone ringing. She tries to tell the caller about her situation but he turns out to be someone watching her from the undergrowth, who informs her that not only is the phone’s actual owner dead – but she just peed on him. Oh, come on! You’d notice that, however desperate you were. (And let’s face it, she could have peed anywhere.)

Even more annoyingly, Danielle simply leaves the phone where it is and runs off down the wooden steps. “What are you doing, woman?” screams the viewer, “You’ve got a working cellphone! You’ve got a connection! Call 911!”

Good grief, this is one dumb fictional character.

As the film progresses, we get a series of largely unconnected scenes of Danielle waking up in various locations. She’s naked and hanging from a shower; she’s topless and hanging from a tree branch; she’s naked in the bath. Inbetween these are flashbacks to her relationship with Charlie (writer-director Phil Herman), the man who is apparently behind her abduction as there was a damn big photo of him in one of the bags. Married with kids, Charlie kept Danielle as his bit on the side, providing her with an allowance. When he left her, she phoned his wife just to say that he could “pick up his underwear any time he wants.” Charlie was furious at this treachery – although of course he’s hardly a paragon of honesty himself, the two-timing bastard. There are also scenes of Danielle’s best friend Cindy (Tiffany Sinclair: Spiderbabe, Lord of the G-Strings), worried that she can’t contact her, and Cindy’s boyfriend who promises to check on Danielle when he’s in the area. 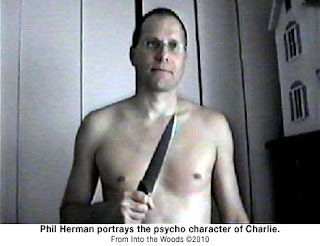 Charlie actually appears in at least two of Danielle’s wake-up scenes. Tied to a bed, she is rescued by Charlie who assures her he has been looking for her for two weeks before collapsing for some reason. Back in her apartment, she finds Charlie naked in the shower washing blood from himself, after which he blows his brains out with an automatic pistol. There is also a scene where Cindy phones Danielle but has somehow transformed into a rapacious lesbian hoping for some sexy fun.

What the jiminy is going on?

Gradually it becomes evident that what Danielle is experiencing is not real but all in her head, possibly as a result of a self-inflicted injury. So… it’s all a dream. While this has the advantage of retrospectively explaining all the inconsistencies, continuity errors and implausible character actions, it’s a bit of a cheat of the viewer. What is worse, once we realise that nothing she is experiencing is real, we immediately cease to care about the character or anything around her.

To Phil Herman’s credit, he doesn’t take the easy option but continues the story, giving a clever spin towards the end of the 65-minute feature which reveals that it is actually all in Charlie’s head. However, this is ultimately just as much of a cheat and I’m not convinced that the plot makes sense in this respect because so much of it was from Danielle’s point of view. Probably the biggest problem with the film is the constantly changing setting and time as the story jumps back and forth between Danielle’s confusing, unconnected adventures – most of which are not in fact ‘in the woods’ – and equally confusing, unconnected flashbacks, occasionally segueing to scenes of Cindy or her boyfriend or indeed Charlie (and towards the end, Charlie’s brother) which may be flashbacks too, may be reality or may be in Danielle’s head. How much of this is in Charlie’s head? Are the flashbacks real or not? Is Cindy real or not? Danielle’s clothing (or lack thereof) and hairstyle change constantly while Cindy looks identical in almost every scene, even the obviously unreal one where she’s is a lezza.

I can see what Phil Herman is trying to do and I’m certainly glad that he took this tack rather than the expected one of a lone psycho mistreating a woman in a leafy glade for an hour and a bit. Give me mystery over misogyny any day. But I’m not convinced that this all works, except in a disappointing, catch-all ‘none of this was real’ sort of way.

A final scene has Charlie, straitjacketed and ranting in a mental institution (what century does Herman think we’re living in?), viewed on a monitor by two employees who recount his story – and they use flashbacks as well! But are these flashbacks reliable? Like the boy who cried wolf, once a film has deceived its audience to this extent, can we trust anything it tells us or shows us? 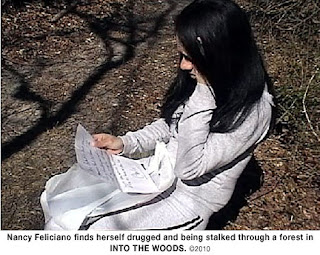 The acting is generally good including a commendably frightened performance from Feliciano. The sound is mostly clear but the visual presentation of the shot-on-video movie can’t help but look cheap, despite some decent editing. Ultimately I think that Phil Herman has overstretched himself with a narrative structure that would only have worked fully if (a) we had spent more time on each scene, rather than jumping to a different time/place/character/reality every couple of minutes, and (b) the strangeness had built gradually so that we could share Danielle’s feelings as her initial fear turns to confusion. As it stands, the moment that we see her wake up that second time with different clothes and hairstyle, we know that either something strange is happening or we’re watching a totally crap movie. With the realisation that the former is true, we go from not knowing what is going on to not caring what is going on.

Sherlock, Sinclair, Kahler and Day of the Ax director Ryan Cavalline are credited with ‘additional camerawork’ which presumably ties in to the extraordinary geographical area over which this was filmed: ‘on location in New York, Florida, New Jersey, Pennsylvania, Oregon, Washington and Illinois.’ I think this is partly to blame for the fragmented nature of the film. The Wynkoops, for example, who play the two loony bin workers at the end, were evidently shot completely separately to everybody and everything else and I think the same must go for the scenes of Cindy, Charlie’s wife and brother etc. There are no other credits so presumably things like sound, make-up etc were all handled by young Mr Herman.

The screener disk includes trailers for Herman’s vampire sequel After Midnight and horror anthology Before I Die, both of which look inexplicably rough, like nth generation VHS dupes, for some reason. 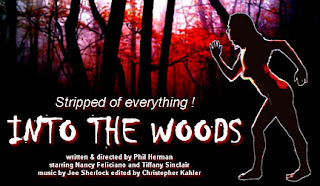 Into the Woods is a valiant attempt to do something different, taking the low-budget sector beyond its usual parade of psychos, zombies and vampires into something more metaphysical and thought-provoking. That it doesn’t quite succeed due to the limitations of the production is less important than the fact that the film at least aims for something original and makes the most of what limited resources it had available.