I met and interviewed cinematographer Alan Caso on the set of the Hallmark Frankenstein mini-series in Slovakia in August 2003. 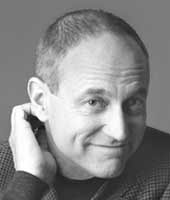 How did you get this job?
"Nick Lombardo who’s an executive over at Larry Levinson Productions, he and I have done two projects together, both when he was still at Turner Pictures, TNT. The first one was Good Old Boys that Tommy Lee Jones had directed and the second one was George Wallace that John Frankenheimer had directed. Good Old Boys was just a two-hour and George Wallace was a four-hour mini-series. We really hit it off pretty well and stayed in touch. He called me up in May about another project that they had going which was King Solomon’s Mines. It went back and forth and then they lost the director and they didn’t know what they were going to do, they were waiting for another director. And in the meantime he said, ‘Would you be interested in shooting Frankenstein?’

"Any cinematographer would love to shoot a picture like Frankenstein, especially on a location such as Slovakia. The rich environs, the ruined castles, the villas, the old streets, the town squares, the village houses, the farms. So I jumped right on it. Then I got on the phone with Kevin Connor who’s the director and we talked a bit on the phone before I came on board. I really loved his concept, his approach to what he wanted to do, and I think he liked mine too so it was like a fait accompli after that."

I understand you’re shooting in Panavision. Why is that?
"To be honest, because it was the best deal I could get here. My original choice was to shoot with Zeiss lenses but it was difficult. It wasn’t so much of a money thing, in fact it wasn’t a money thing at all, it was an availability thing. They want to shoot this picture in three-perf, and ARRI in Munich did not have enough equipment to supply a three-perf show. They had just enough for us, the first unit, but second unit would have been a problem. They really bent over backwards seeing if they could scare up something but all this stuff was out, they’re very busy. What they did do was give us a tremendous deal on our lighting and grip package."

What’s so important about three-perf?
"If you’ve got a production that you know it’s not going to go theatrically, three-perf really does save a lot of money because you’re cutting your raw stock costs by 25 per cent, so I think that was really the reason for doing it. It’s little trickier because there’s very little room for error. if you’ve got a problem with the gate or hairs or anything like that, there’s no room to move." 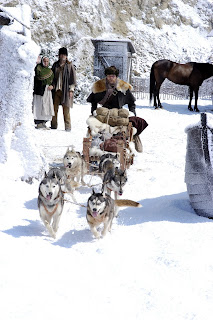 What ratio is this in?
"Our final viewing aspect ratio? We’re shooting 4:3. they made the decision not to go 16:9 or high-def format, although they are doing a release in high-definition, but it will be in the 4:3 format. I’m not sure what the marketing strategy is at Larry Levinson productions. I personally think that everything should be done in 16:9 at this point, and most everything should be aired in 16:9. Right now NBC airs almost all of their prime-time television series shows in 16:9. But they’ve got a marketing plan.

"But one thing that’s for sure and I made it quite plain when I was brought on board: I would not try to serve both masters. I said they have to make a decision on what they want to do, 4:3 or 16:9, and that’s what we’ll shoot. If I can accommodate at certain shots, that’s fine, but there’s only one that you can really compose for. They said 4:3, so I said okay, what I will do is I will compose in 4:3 and I will just keep stuff clean in 16:9. In other words, I won’t have somebody standing around in frame or grip stands or something like that, but by no means will it be composed."

Can you explain this smoke?
"It’s just very light, it just creates an atmosphere. It’s not really smoke for smoke’s sake. Although in scenes where candles are burning or stuff like that it’s much more justified. It creates more of a period feel. People were inside during those days, everything was lit by candles and lamps, they were quite smoky environments in reality. So on a justification level it’s very justified, although I’m really just doing it for mood and feel."

How are you finding working in Slovakia on an international crew like this?
"Oh, it’s been great so far. There’s a difference in the way crews work here and what they’re used to, but that’s the same even with crews in the United States. It depends upon what you’re lighting style is. There’s two things. They’re having to adapt to a different way of working which is more western, but also they’re having to adapt to my lighting style, so it’s a double-edged thing that they’re having to deal with. But we’ve worked out a good system and it’s really been going quite smoothly. The first week was kind of rough." 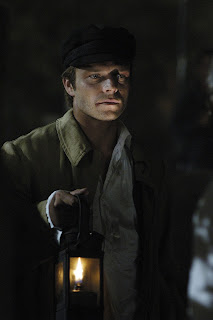 Have you done any gothic horrors before?
"No, I haven’t. When I first started shooting I did my required amount of low-budget horror movies but nothing really classy, especially an icon like Frankenstein. So that’s the other reason why I really jumped at it because I wanted to really get into a really strong, gothic period piece."

Have you seen any other Frankenstein films?
"Oh, sure, yes."

To get ideas of what to do or not to do?
"No, not really. They’re in my collective memory, but to look at them now, so fresh before I start something like this, I think is more distracting than it is helpful. I’ve got a firm idea in my mind of what the feel was, but I really want to go into this, as I do on a lot of projects where there needs to be a fresh, original feel. It’s very organic to the material and it should come out of the material and not out of some germane experience that happened before when watching another show."

How are you finding working with Kevin?
"It’s been just great. Kevin is a great visionary. He’s got great taste. He doesn’t dilly-dally. He gets his performances, he doesn’t try to search for the performances. He’s of the belief, and I agree with him, that the best performances are usually in the first couple of takes when the material’s fresh. He likes to move on, he doesn’t over-cover. He comes up with really fun ideas and he’s got a great grasp of the gothic nature of the material. I think we’re all interested in doing more than just a horror movie. I think there’s a number of thing. There’s a very strong romantic setting that takes place with Victor and Elizabeth. So there’s a romance going on. The creature is a very sympathetic character although he’s also a killer and dangerous. But there’s so much pathos and sympathy about the character. Luke Goss is doing a terrific job about bringing that out. He has really taken that character and given him many dimensions."

The sets are really cramped. It must be very difficult getting lights and cameras in there.
"They are, but once again lighting before the turn of the twentieth century was all very natural. Most light that was in an interior during the day came in through the windows. Anything after that, night interiors or day interiors that are very dark that needed interior lighting, it’s all very source-y. So I’m just playing the sources as they are and letting things go, letting it all drop off. I’m not putting any lights inside - it’s all being lit through windows so that’s bringing into the natural, organic way. All that kind of stuff contributes to the total feel of the show, of the material, because that’s what was natural at the time. It only helps here because it’s a dark, moody, gothic show." 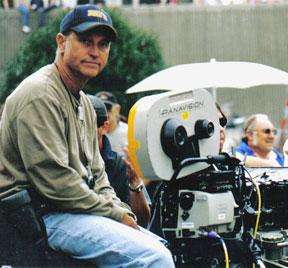 In the UK, Six Feet Under is a huge hit. have you been with it from the start?
"Right from the start, yes. I didn’t do the second, third and fourth shows, only because I was on another feature at the time so they found somebody to come in to fill in for me until I could become available again. That show is a completely opposite approach. When I shoot that show it’s all a tremendous depth of field, lot of deep focus, all wide-angle lenses. The way I’ve done this show is a very, very narrow depth of field, a lot of long lenses, a lot of selective focal planes. Adding a lot of atmosphere, just with the smoke and stuff. A lot less defining and a lot more letting things drop off into the shadows, and capturing that different kind of mood. So it’s fun because I get to do something different."

The shadows must be important. Almost as important where you don’t light as where you do.
"It’s actually more important: what’s implied rather than what is seen."
Posted by MJ Simpson at 20:30