Gabe De Cunto was in charge of the special make-up effects on the set of the Hallmark Frankenstein, which is where I interviewed him in August 2003.

And how long to get it off at the end of the day?
"About 45 minutes. It’s like building a sandcastle."

How is it actually constructed?
"The pieces are made out of silicone. You can see the silicone’s really translucent, almost like real skin. It’s painted with tattoo colours, the alcohol-based make-up paint that we use. It’s actually got stitches and threading inside the stitches. There’s markings on the body where Victor made notes and wrote all over it. Luke actually loves that. He said it’s so disrespectful to write on someone’s body like it’s an object."

The facial make-up?
"That’s silicone as well, yes. Six different appliances that get glued onto Luke. At the end of the night we throw them away. Brand new pieces the next morning." 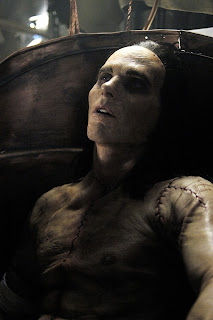 Do you have a big supply of them here?
"We do, but they keep playing catch-up with us. They send more stuff from the States. We’ve got the wig that goes on at the end of the make-up. This is the final piece that locks him in, and he starts getting into his character."

How is he to work on?
"He’s great. This is an extremely difficult make-up to wear. It’s difficult for him but he’s doing really well. He’s very patient, he’s a great guy. If he wasn’t to begin with, I think it would be a lot more difficult for him."

Does it need a lot of touching up during the day.
"Yes, throughout the day. Especially in this weather. It’s been really hot these few days. So it’s a constant upkeep to keep it from falling apart."

Have you done stuff quite like this before?
"Yes, pretty much. I’ve been doing this for twelve years now. I just recently worked on movie called Van Helsing, a Stephen Sommers film. I did Planet of the Apes, Men in Black II, Nutty Professor 2, The Grinch. Prosthetic is mainly what I do." 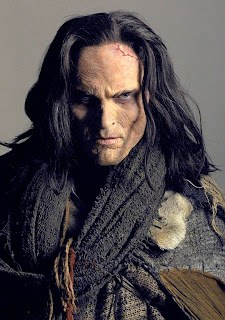 He must sweat like a pig under all that.
"It’s extremely hot. It’s worse than wearing a wetsuit because a wetsuit at least kind of breathes. This just keeps everything inside. Yesterday we had crew members wearing T-shirts and shorts, and they were sweating like pigs, so you can imagine Luke standing in there. It’s a brutal make-up to do. Meg Tanner is my assistant and she’s Luke’s personal make-up artist. She does beauty make-up on him, the straight make-up, but she’s actually doing really well helping me with gluing prosthetics which is something entirely new to her."

Is the make-up constant, or does it deteriorate in terms of continuity?
"The make-up doesn’t change as far as the pieces, but the colouring does. He tends to be fresher at the beginning then he starts rotting a little more and a little more. The bruising changes, but that’s about it."

Do you have to make up a stunt double too?
"Luke’s done most of his stuff but we do have pieces standing by in case we do need to do a stunt double. The straight make-up department has done a stunt double and they just actually went in and painted to simulate the pieces. They did a great job, it looked beautiful."
Posted by MJ Simpson at 20:42