This latest collaboration between Charlie Band's Full Moon and JR Bookwalter's Tempe is a beautifully shot, technically perfect, reasonably entertaining horror film, which suffers by having almost no story whatsoever.

Now herein lies a major problem: all the principal characters are art students, which for this reviewer at least means that I really didn’t care if they lived or died, although Colin is clearly delineated as the biggest asshole, getting massively drunk at the bar and making passes at two of the girls. The only other characters are old bartender Pete and Louise’s abusive trucker husband, ironically named Art. 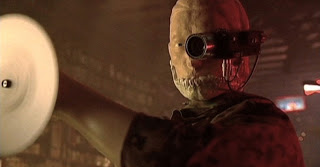 Another problem is that we are 45 minutes into this 72-minute movie before Jigsaw is burnt (on a cross!). To nobody’s surprise, he somehow comes to life, somehow gets himself down off the cross, and sets off to murder those who created him (who are very conveniently having an after-hours drink at the bar). Oh, did I mention that they have very conveniently supplied him with a camcorder in his head, a shotgun on one arm and a buzzsaw on the other. Actually ‘nobody’s surprise’ is about right. Jigsaw kills two people unseen by the rest (who never wonder whether they’re alive or not) and then picks off the rest one by one. Not only is there no suggestion of what might have animated this monster (a magic charm, an ancient curse - give us something here) but those who remain alive never question his existence. Nor do they call the cops.

The attacks are brutal and very well filmed, skilfully showing very little and thereby appearing much worse than they would if the camera lingered on prosthetics and fake blood. However, in the grand tradition of the Mummy, the Frankenstein Monster, etc, Jigsaw cannot walk at anything above a slow plod and could therefore be very, very easily avoided by simply jogging. There is some talk about him collecting bits from the bodies to build a jigsaw man like himself, but we don’t see this and it’s never followed up.

I feel guilty about criticising this film because it is extremely well made. The Jigsaw suit is scary and effective; the acting (by a largely neophyte cast) and direction are top notch; the cinematography (by Carlo Besasie) is superb, especially as most of the film is shot at night; and even the sound mixing is terrific; it’s not often you notice that, so a tip of the hat to Supervising Sound Editor Maui Holcomb (Hell Asylum). The characters are interesting, the dialogue credible and sparky. All credit to Picardi and Adams, who previously brought us Vengeance of the Dead and worked as editors on Frankenstein Reborn. But the story is simply way, way too top heavy. We spend far too long waiting for Jigsaw to be built, burnt and reanimated (which is after all what we’ve been promised on the box) after which we’re given neither explanation nor exploration, and it’s all over far too quickly.

Jigsaw has been released on R1 DVD by Shadow Entertainment as a double bill with David DeCoteau’s film Totem. It has a 15-minute ‘making of’ which is one of the very best I’ve ever seen, and a trailer which shows all the important events in the film, plus a directors’ commentary.

Email ThisBlogThis!Share to TwitterShare to FacebookShare to Pinterest
Labels: 2002, USA