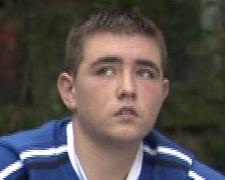 What can you tell me about Paul?
“Paul’s the leader of the group. He’s the biggest one and the head dog, as you might say. He’s got a bit of a mystery to him because of what happened to his brother with the car accident where he lost the use of his legs. So he’s sad but he still keeps a straight face. Above that, he’s quite a violent person!”

For the auditions, were you just reading sides?
“The first audition, it was totally improvised, everything was improvised. The second audition was reading from script.”

How old are you and how old is the character?
“The character’s fourteen but I’m seventeen in two weeks so there’s a big difference. He’s an oldish-looking fourteen-year-old boy.”

What have you done before this?
“I’ve done mainly extra work. Quite a lot of extra work, actually. It’s experience anyway, isn’t it? And I’ve done Screen Gems which is ten-minute films and half-hour films and that. I’ve done three series of Treflan [? - MJS] but that was extra work as well.”

So you’re used to being on a set?
“Oh yes, I’ve been doing it about six or seven years.”

Is this something you want to make a career out of?
“It’s more of a hobby of mine. I enjoy it. I would make it as a career but it’s hard. You’ve got to know people. I’m certainly getting there but it’s going to take a couple of years.”

How are you finding the experience of a lead role?
“It’s all right. It’s stressful at times but it’s okay. I’m in every day of the shoot so it’s tiring as well, but apart from that it’s a laugh. Everyone’s really fun round here.”

Are you going to do some of the riding on the moped?
“Yes, we’re doing that now. I’m the only one who can actually ride a moped properly, out of the whole cast! I ride motorbikes now and again so I’m sort of in charge of it at the moment.”

How are the actors getting on? Do any of you know each other?
“Well, me and Ben, which is my brother in the film - his real name’s Chris Conway - we go to school together and so does his brother Ryan. Everyone else in the cast we’ve met in the last three weeks and we’ve all just really got along. Ryan’s the only boisterous one. He’s loud and he has his times but apart from that, he’s all right.”

Do you have other work lined up?
“It’s just this at the moment. Apart from that, I don’t know. I just finished Young Dracula, doing extra work in that. I might go up to London for a couple of weeks and just try my luck up there.”
Posted by MJ Simpson at 13:28