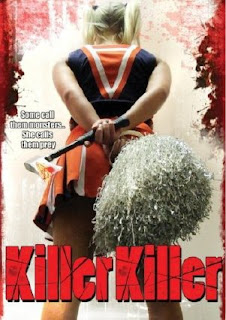 KillerKiller is great. Honestly, this is a terrific little movie with an original premise, interesting characters, good dialogue, a thought-provoking ending and - for those of you who don’t really care about such things - there’s plenty of blood too.

Eight serial killers in a maximum security institution awaken one morning to find their cell doors open, the guards gone and the whole building transformed overnight into a state of semi-dereliction. What on Earth is going on?

Now, I know I’m always comparing films to The Exterminating Angel but it is the sine qua non of there’s-nothing-stopping-us-but-we-can’t-leave movies. In this case, there is a dense, freezing fog around the building and when one inmate tries to make his way through he comes back so frostbitten that he looks like someone has dipped him in liquid nitrogen.

So the eight are trapped and forced to examine their situation. Gaunt, shaven-headed Lawrence (RADA-trained Dutch Dore-Boize - Twisted Sisters, Lovesick: Sick Love - who spends his time between films working as a bouncer at a top London nightclub!) is our central character, our point of reference. Irish Rosebrooke (Cy Henty) who admits to having been a goth in his younger days, maintains that he is the victim of a miscarriage of justice but the others admit their crimes with varying levels of passion and dispassion. 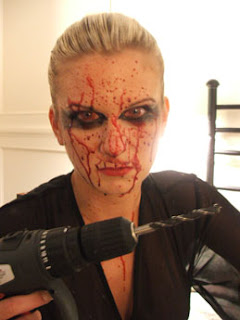 There’s mentally retarded Perry (Richard Collins) who can’t be separated from his scrap of security blanket; cultured physician Harris (James Kavaz: Siamese Cop, Bean 2) who has a dislike of the working class and is presumably named in honour of the creator of Hannibal Lecter; cheerleader-murdering duo Samuel and Victor (Scott Denyer and Danny James); monstrous Nicholas (Nick Page) who is so psycho that the other seven lock him in the cellar for their own safety; and Wallis (Rami Hilmi) about whom we know very little because he’s the first to die.

Lawrence has his back turned at that point and the question is: who killed Wallis? In fact, it’s difficult to see how any of them could have done it as they were all several feet away when he suddenly collapsed in a pile of stab wounds. Nevertheless, the finger of suspicion points to Harris, as does the knee-in-the-groin of retribution and the headbutt of finality.

But as the others succumb, one by one, over the course of 75 finely paced minutes, we see what happens from their point of view. Each murderer finds himself suddenly somewhere else, where a blonde woman (Danielle Laws) kills him in a suitably gory and apposite way. From the point of view of those around him, death is instantaneous, inexplicable - and bloody. Gradually, the group is whittled down until there are only two left, by which point it is clear that nothing is real - but then what is it, if it’s not real? Lawrence advances the possibility early on that they might all be dead and in some kind of limbo, and while that’s probably not the case, it’s as good a theory as any.

This is not a movie with pat answers, it’s a movie which is ripe for endless discussion and debate, much in the manner of The Descent or The Prestige, to name two recent examples. Who is Helle (as the female character is credited)? Where are the eight men? What is going on? 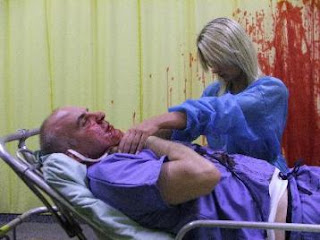 In fact, whereas I normally praise movies for keeping under 80 minutes, in this instance I felt that the film was a tad too short. I would have liked to have seen more debate about whether things were really happening. Although the question is raised over whether the killer is one of the men or somebody else in the building with them, the former option is largely discarded after the second death and I was hoping in vain that something would happen near the end to make us doubt the veracity of what we had seen and ponder whether it might be a straightforward series of violent deaths at the hands of one of the octet after all. I was also hoping that, once the gang were down to two or three, there might be more suspicion among the survivors, in the manner of The Thing or Ten Little Indians. There’s a bit but it’s not really played up as much as it could be.

In any case. it’s clear from the off that the cause of death is something at the very least supernatural and quite possibly metaphysical or theological. I would have liked to have my doubt stretched a little more. After all, we are relying on psychopaths as our guides in this story, who are not the most reliable or trustworthy people, and nothing improves a film like an unreliable narrator.

But such criticism is churlish when the film as a whole is such a belter. There’s some great character conflict and some wonderful character development as we find out more about each of these killers. It’s a surprisingly talky film but writer/director/producer/editor Pat Higgins (TrashHouse, Hellbride) adroitly balances the dialogue scenes with the gore. There’s also a wonderful vein of very black humour just below the surface, which any film of this sort has to have. Interestingly Henty, Denyer, James and Page are all stand-up comedians. 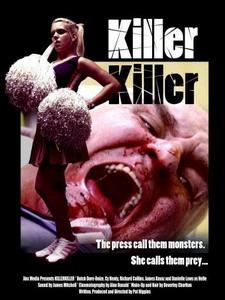 The acting is good, with a very strong double act between Lawrence and Rosebrook at the core of the film. (Collins and Henty both previously worked with Higgins in TrashHouse, while Kavaz and Laws were also in Hellbride; James was in both.) Higgins’ regular cinematographer Alan Ronald (Jesus vs the Messiah) does a great job on the film which was almost entirely shot within an abandoned Victorian mental hospital. However, the sound has some technical problems and I found some of the quieter bits of the dialogue difficult to make out.

Incredibly, Higgins shot Hellbride and KillerKiller back-to-back (and in that order) during the summer of 2006, with the latter premiering first in November of that year at a film festival in Portsmouth. To have produced something this professional in such a short space of time, while doing post-production on another film, is a heck of a work rate. But KillerKiller doesn’t suffer because it’s clear that Higgins has done all his prep including making sure he has a damn good script.

On the basis of KillerKiller, I have ordered myself a copy of TrashHouse and I am eagerly awaiting a screener of Hellbride.