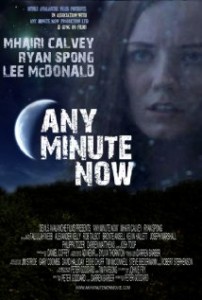 There is some irony that it has taken me several months to get round to watching a screener for a film called Any Minute Now, but things happen and stuff gets in the way. Anyway, here it is, the second feature from Peter Goddard, director of The Season of the Witch. And it turns out to be a spookily effective ghost story which is let down by some curious plot inconsistencies, although not so much as to render the film unenjoyable.

As with Season, a teenage girl comes to a new location and uncovers insular conspiracy among the locals. In this case it’s Anna (Mhairi Calvey, who was the young Catherine McCormack in Braveheart, aged five) who is dumped with her aunt and uncle for a couple of weeks because her parents are going through a rough patch and on the verge of separation. According to the blurb, she’s 16 which is pushing it a bit to be honest because Calvey was 22/23 when this was shot in Dorset in 2011. She settles into her new school where she initially befriends Abi Hartford (Alexandra Hansler aka Alexandra Kelly, who had a bit-part in Kill Keith and looks like a young Olivia Colman).

Now here’s our first problem. Anna is studying for her A-levels but you can’t just switch temporarily to a different sixth form in a different school in a different town midway through your A-levels, and certainly not just for a couple of weeks, just because your parents are having a barney. That’s not how the education system works. I couldn’t help wondering whether the part had originally been written younger, especially as there’s a rogue bit of dialogue where Anna’s aunt, walking her to school on her first day, talks about how much trouble they went to in getting her a school uniform. But Anna and her classmates, like most A-level students, don’t wear uniforms.

The childless aunt Jennifer (Philippa Tozer, who mostly does stage musicals) and uncle David (Darren Matthews, who played Peter Sutcliffe on the Discovery Channel) are exactly the wrong people to temporarily house a teenage relative, strict and disciplined. “We don’t normally eat away from the table,” says Jennifer, telling us pretty much all we need to know about these two. 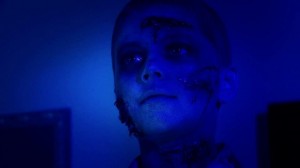 At school, Anna also meets ditzy pink-haired gothette Lydia (Tallulah Webb) and floppy-haired nice-guy Josh (Ryan Spong). There’s some really good characterisation among these ‘teenagers’ with taciturn Anna unsure who to trust between Josh and Abi, whose families have history. Josh lives with his stepfather (Rob Talbot: Jack Says, Call Me a Psycho and a bunch of zombie/vampire shorts) who runs a shop that is described (in a note which Aunt Jennifer leaves for Anna) as “the convenience store in town” but which is clearly some sort of delicatessen.

There is also a problem with the ‘town’ itself which, according to Josh, is a shitty little town that has been depressed since the local steelworks closed down. For a post-industrial town it’s remarkably rural: all we ever see are 18th/19th century cottages (Jennifer and David live in a huge, thatched farmhouse) surrounded by fields and moors. Everyone keeps calling it a town - and it’s clearly big enough to have its own sixth form college - but every location we see looks like a village. There is a pebbly beach, but again the dialogue diverges from the location with Josh arranging to meet Anna “by the main steps” when this beach is backed by dunes and there are no steps to be seen. This sort of thing spoils the ship for a hap’orth of tar.

Anyway, Anna is narcoleptic and unsure if her new medication is working as she is having hallucinations - or is she? A small boy with bleeding facial wounds (Josh Toop, suitably unnerving in a role originally lined up for Rohan Gotobed) at the foot of her bed, a strange man underneath the tree in her aunt’s garden. She also sees the boy floating in the sea and dives in to save him but he disappears. 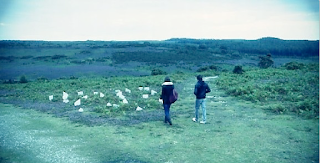 Clearly something is going on in this never-named town/village, which has to do with a little-talked-of, shameful historical situation that Josh knows about. I liked the way that this and another scene introduced, without explanation, a layer of unmentioned (but narratively relevant) snow to a story set during the summer. I wouldn’t be surprised if some people scoff at that as an extreme continuity error but it is clearly a deliberate decision by Goddard. And, crucially, it makes sense. Having just re-read my review of the awful, pretentious, over-hyped Kill List, a film where random spooky things happen for no narrative purpose whatsoever, it’s nice to watch a movie where a whole bunch of mysterious shit happens which all makes some kind of sense at the end. If Peter Goddard can manage this, why can’t Ben Wheatley?

Any Minute Now builds its spookiness and mystery effectively while also developing the teen romance between Josh and Anna. The back-story which Josh reveals is original and horrific, and the film’s satisfying climax achieves the tricky balance of being both gory and supernatural.

On a technical level the video photography is generally good (Goddard shares the DP credit with Tim Parsons) although some wobbly shots could have benefited from either a tripod or being handed to Steadicam operator John E Fry (The Harsh Light of Day, Jack the Last Victim). Producer Daniel Coffey handled the sound mix which suffers unfortunately from Calvey’s underplaying of her character. Everyone else is clear as a bell but Anna’s lines throughout the film are quiet and sometimes get lost in the mix. She’s a taciturn, introspective teen but she’s just a little too taciturn to hear a lot of the time.

Nevertheless, Calvey leads a fine cast which also includes Kevin Hallett (Kill Keith, The Scar Crow), Carl Wilkins (The Harsh Light of Day) and ‘name value’ Lee Macdonald - Zammo McGuire himself! - as the teens’ teacher. Macdonald is one of several cast members to have also appeared in Kevin Hallett’s short The Sharpest Knife. Not unexpectedly, many were also in Season of the Witch and/or Goddard’s various shorts. 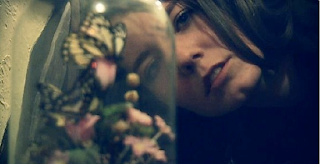 Despite running for the best part of two hours, which would normally be a no-no, Any Minute Now kept me engrossed and by the end I was really digging the film. Goddard set out to make a distinctly British ghost story, tapping into that whole British Horror Revival thing by setting it very much in the domestic, realistic hear-and-now. The result, which premiered at the 2013 Festival of Fantastic Films alongside Season of the Witch, can be judged a success.