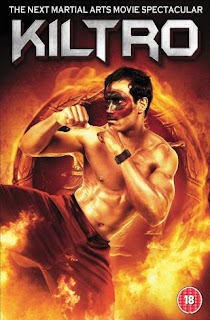 Around this time of year I like to kick back and relax with a Chilean martial arts movie. Most years I end up frustrated and disappointed on account of there being no such thing, but not this year, not 2008. Two years after it was released domestically, Kiltro is available in the UK. At last I can satisfy my craving for Santiago-style action!

And let me assure you, Kiltro is fab.

Twenty-eight year-old man-mountain Marko Zaror stars as Zamir (‘Zami’), a bored youth with a rudimentary sense of morality but a naive view of the world, who lives with his mum in one of the less salubrious parts of town. Late one night he saves a young oriental women from an attempted rape and carries her home where she gives him a thank-you kiss. Zami is smitten but knows not the ways of women and, being a bit of a lunk, thinks that the way to make the girl (half-Korean Kim: Caterina Jadresic) fall for him is to beat up anyone who talks to her.

Kim’s father Teran (Man Soo Yoon) teaches Tae Kwon Do but pours scorn on Zami for only knowing street-fighting. Zami never knew his own father but has a pendant that means something to certain people. 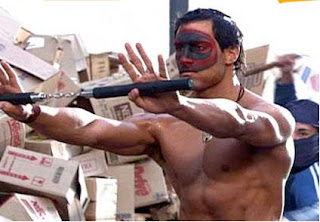 Enter our bad guy, Max Kalba, played to debonaire perfection by Miguel Angel De Luca. Broad of shoulder, trim of facial hair, he’s a pig-tailed, badger-bearded bastard who wears an immaculate three-quarter-length coat and carries a swordstick topped with a vicious silver claw with which he easily rips out throat and stomachs. Kalba is on a mission to kill all the members of a sect which included Teran, Zami’s missing father and Yun (Pablo Chuyin), a draper who employs Kim in his shop.

After despatching Yun, Kalba comes looking for Teran, fighting off all the Korean’s students. Zami stands up to Kalba and, although he is soundly beaten, that enables Kim to escape.

Kim and Zami end up in a shoreline shack, home of a dwarf named Nik Nak (Roberto Avendano) who was also a member of the sect. Without mentioning him by name, there is a brilliant gag about Yoda in this sequence. And in fact there are quite a few laugh-out-loud moments in Kiltro which, while far from being an actual comedy, has great fun playing with the conventions of the martial arts saga.

Nik Nak sends Zami on a quest to find a master named Soto (Alejandro Castillo), another member of the sect who is now a drunken bum. But Soto takes Zami under his wing, take him out to his desert camp and gives him a drug that clears his memory. Unencumbered by any thoughts of Kim, Teran or his father, Zami trains, learning to react instinctively. Eventually, Soto judges that he is ready to return to the city and face Max Kalba. 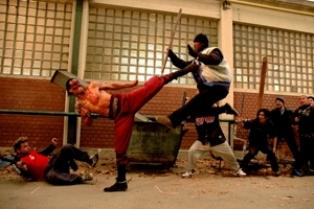 The climactic fight starts with Zami - bare-chested for the first time, revealing his rippling pecs - fighting a whole gang of Kalba’s acolytes. Zami wears the face-paint that distinguishes members of the sect and also has some vicious spurs on his heels - and the blood flies. Finally, Zami faces off against Kalba. Kalba who has found and kidnapped Kim, Kalba who has a history with Teran from their younger days, involving a woman, and who now keeps the Korean barely alive.

It’s a terrific fight; heck, all the fights in Kiltro are terrific. Short and brutal, the influence seems to be more from samurai movies than chop-socky flicks. Blood spurts, bodies crumple, victors stand still. The final image in the Zami-vs-Kalba fight is a real punch-the-air moment, sheer action cinema brilliance.

Part of Kiltro’s appeal is undoubtedly the unusual setting, helped by a score by ‘Rocco’ which is pure western, complete with wailing Mexican trumpets (well, Chilean trumpets I suppose). The cinematography by Victor J Atkin is magnificent, especially in the desert training scenes. But this isn’t just an oddity, trading purely on its novelty value. Writer-director-editor Ernesto Diaz Espinoza understands the martial arts action genre perfectly and directs with a light touch that leaves audiences grinning at both the dialogue (despite some slightly iffy subtitles) and the action.

A former Chilean national Tae Kwon Do champion, Marko Zaror started his film career in Mexico where he was working as a model. In 2001, after moving to LA, he had a bit-part in Hard as Nails as a bodyguard, then starred in Chinango and Into the Flames before landing a role as stunt double for The Rock in The Rundown, an action thriller also starring Christopher Walken and Rosario Dawson, for which he won the 2004 ‘Stuntman of the Year’ award. While it’s a bit of a shock to discover that The Rock uses a stunt double, you can see a definite facial similarity between the two men, not to mention their physique, so it makes perfect sense. 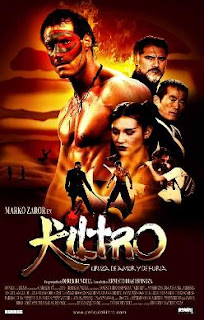 Kiltro and the follow-up from Espinoza and Zaror, Mirageman (a non-fantasy superhero picture) were big hits at the Fant-Asia festival in Montreal in 2007. A proper English-language release for both films should see Zaror getting some decent offers for DTV action films. It’s a shame that the KCM subgenre seems to have faded away as he would make a great kick-boxing cyborg!

Both films were produced by Derek Rundell, a US entrepreneur who co-founded Mandrill Films with Zaror and Espinoza, who both take a co-producer credit on Kiltro. The cast also includes Francisco Castro (Angel Negro) and Luis Alarcon who was in Chilean Gothic, a 2000 adaptation of HP Lovecraft’s 'Pickman’s Model'.

I enjoyed Kiltro enormously and now desperately want to view Mirageman. I look forward to following Marko Zaror’s career because he’s a great fighter and a good actor.