When I visited the set of Mutant Chronicles in June 2006, of course I had to speak with Thomas Jane who not only plays the lead role in the movie but is also a major fan of sci-fi, comic-books and similarly cool things. 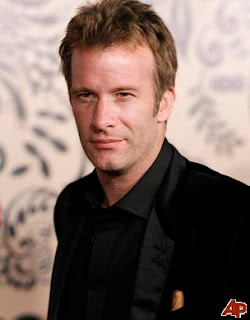 Tell me about your character in this film.
"I don’t know. I’m not good at talking about stuff like that. What do you think? I’m a kind of soldier guy, I guess."

Yes. I love it. I get to write about it.
"What turned you onto sci-fi?"

Doctor Who. Everyone in this country started with Doctor Who.
"I watched Doctor Who. They had it over on PBS I think, over in America. We only had 13 channels. We used to get Doctor Who on the UHF channel back in Maryland. I went to see Alien when I was eight - my dad took me - and that kind of changed my world. I was never quite the same since then. That’s really what cracked it open for me with sci-fi. Then I saw 2001 and my dad started turning me onto all the great old sci-fi movies and that’s how I became a fan. So I’ve always been a fan of sci-fi since I was a kid. So I’ve always wanted to do parts like this. I love it."

It must be more fun doing something like this than a straightforward acting role.
"You get to create your whole world. You get to create down to the cigarettes people smoke and the whiskey people drink and the way people dress. Sometimes the language they speak. Every angle of the universe can be played with and toyed with. That’s always exciting. In our world, everything has been destroyed three or four times over. All the natural resources are used up or burnt up or blown up. Now we’ve just built our way up to about the Victorian age of old, so it’s sort of a new Victorian age. Everything’s steam-powered, everything’s massive, iron structures with rivets and rusted all to hell. It’s raining all the time, cities are ruined, the world’s gone to hell. It’s really fun!

“I’m a product of that world: a cynical, hardbitten soldier who doesn’t really see a way out of this. I was born into it, I’m pretty sure I’ll die in it. I lost a bunch of friends in the war. I’m way beyond even having friends any more, just waiting to die. Then this monk pulls us out on this mercenary mission to go down into the Earth to find this machine and blow it up. So I’m having a blast." 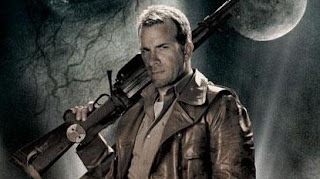 Does working with effects and green-screen make things easier or harder?
"It’s easier. I think it’s just a matter of being very specific about the world you’re creating. Everybody has to be telling the same story and acting in the same environment. So I just try to ask a lot of questions about where we are, the geography of things, what it’s like and what it’s going to be like when the special effects boys are finished working their stuff. So that when we see it, everybody’s acting in the same picture.

“When visual effects movies fail is when you can tell that the actors are inside of a box and they’re putting everything in later. You don’t really feel like they are existing in the same scope that the guys are creating later. I think Sky Captain suffered from that - everyone seemed to be very aware that they were acting in a small warehouse and later the actual images were so grandiose. It’s a difficult thing to grasp. I think theatre actors have a better chance at green-screen acting because they’re used to creating everything with their imagination. Film actors tend to be a bit lazier: if they don’t see it then it’s not there and it doesn’t exist."

How do you find Simon Hunter as a director? This is a step up for him.
"I think Simon always had this sort of film in his mind so for him it seems like a natural progression. I’m impressed. He’s got a great sense of visual grammar. He knows what lenses to use, he’s a big fan of the wide-angle lens. He really knows what’s going on. He’s got a great idea of the movie, it’s all in his head and he’s storyboarded every scene, which is unusual. Most people just storyboard the key sequences. Simon’s got every scene storyboarded. There’s a book on set here, you can read the whole thing like a graphic novel." 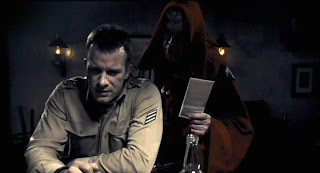 Is that helpful to you as an actor?
"Very helpful to see what the director has in mind for a scene. Because I could be acting my ass off and the director plans on doing the whole thing in a giant wide shot - useless! Don’t waste my time. I like to know what the shot is and how I fit into that shot. The director can pick the right frame and I have to do very little."

Were you familiar with the game?
"No, I wasn’t. I don’t think very many people are unless you’re from Sweden. And I don’t care. I’m not a big game person. But we have a really good story and the universe that the story exists in is interesting. I’m sure that came a lot from the game, it’s a very complex, complicated thing."

Is there a lot of action? Are you having to to do stunts?
"You bet - all that crap! A lot of fun stuff. We’re having a lot of fun. The movie comes out in 2008 so for me to tell you all about this stuff now would be kind of useless. I’d rather save it up for when we’re getting closer to when the movie’s coming out."

Will you be involved much in post-production?
"I don’t know. I’m sure they’ll bring us back for little shots and green-screen stuff. The beauty of green-screen is if we’re missing something we can literally just throw it up and grab a camera and a costume and knock it off. So that’s exciting. I’m having a ball. The character’s a real throwback to the adventure characters from the 1930s and 1940s. A soldier with great boots and cool guns and military outfits. I’m having a ball." 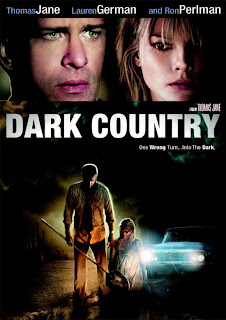 Is it more a war film than a sci-fi film?
"There’s a lot of war in it. It’s definitely set in the future, it definitely looks like: ‘Oh, I haven’t been there.’ So you could definitely say it’s a futuristic war film. there’s a great opening war sequence. After that it’s a bunch of soldiers burrowing their way into the Earth, looking for this machine. It’s kind of like Journey to the Centre of the Earth with soldiers and fucking mutants. Which is really cool. We’re going down through layers of time so as we get deeper into the Earth we start getting skyscrapers and shit like that."

What have you got lined up after this?
"Punisher 2 starts in January, so we’ll be making that. They’re writing the new script now; the old script wasn’t so good so we’re getting a new script. We’ll steer that up to go for early next year. I’m excited about that. I’ve got this production company called Raw Entertainment and I’m producing a horror movie. Steve Niles, who wrote 30 Days of Night, is my partner. Sam Raimi’s making 30 Days of Night. So Steve wrote that, and we’ve got a thing called The Lurkers which is a detective noir horror movie. I’m also going to direct my first horror movie next year, called Dark Country right now. We also have a line of comic-books that we’re putting out. One’s called Bad Planet, a sci-fi book, amazing shit. We’ve got Bernie Wrightson doing a cover, Mark Schultz, Mike Kaluda, Dave Stevens is working on a cover for us. We’ve got fantastic interior artists. Tim Bradstreet’s doing the inks for issue one and we’re working on issue two right now."

Are you a big comics fan?
"Yes, big comics fan. We have another one - it’s called Alien Pig Farm, which is basically rednecks vs aliens in Kentucky. Aliens land in Kentucky in this pig-farming community and try to eat everybody. The pig farmers unite and try to battle the aliens. Fun stuff and a great comic. It’s in the vein of Lil’ Abner. We have a terrific artist named John Marquez working on that. He’s got a very Frank Frazetta style but it’s in that Lil’ Abner vein. I’ve been a huge comic fan, especially sci-fi comics, since I was a kid so I started this Raw Studios which is a sci-fi and horror comic book line and those are our first two books."

Is the idea to do comics and then turn them into movies?
"Absolutely, we’ll mix it all up. Steve Niles has a comic-book called The Lurkers so we’re adapting that at Lion’s Gate into a film. Dark Country is a film and I’ll do the graphic novel version of that." 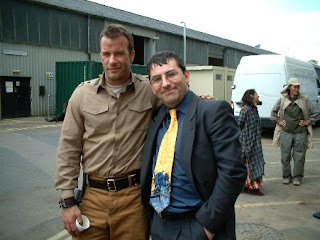 What’s Dark Country about?
"It’s a newlywed couple driving back from Vegas at night and they come across a body in the road who is still alive. There’s been an accident. They put him in the back seat and try to find a hospital. The guy wakes up and tries to kill the guy driving. They tumble out of the car and the guy driving beats him off with a rock, killing him. They don’t know what to do so they decide to bury him in the desert - then it all goes downhill from there. It’s sort of a noir horror in the vein of Blood Simple meets Detour. So that’s going to be a lot of fun.”