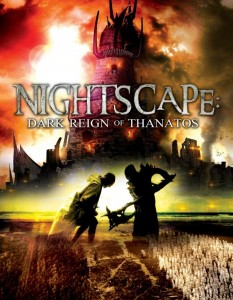 Remarkably, the title is not the worst thing about Nightscape: Dark Reign of Thanatos, a ridiculously over-ambitious gothic fantasy epic shot for about £2.50 and dragging on for about 100 minutes. God bless the guys who made it but it’s an absolute chore to sit through and took me several goes. This opening caption (as they say over at Cinemasins: “Reading.”) sums up the ghastly sub-sub-Tolkienism of the whole thing:

“Upon creating he the earth, the great god Zelos grew weary and so forged in his image two sons to uphold his kingdom and ensure its longevity, Aevum and Thanatos. As time progressed, so too did the intentions of the two sons. The second, Thanatos poisoned himself against the will of his brother and turned to blackness and evil for answers. From this new hatred the darkness bore a final battle to end the rule of either son - for their father lay dormant, undisturbed and unaware of his failing hopes...”

There’s a whole load more in this vein narrated by someone doing an impression of Tom Baker as we watch an admittedly quite well-directed fight scene between Aevum and Thanatos on a beach. But the constituent parts of their costumes look very modern and one of them has a massive, unwieldy axe on a long, thin, wobbly pole which is just the most stupidly impractical weapon you’ll ever see. In fact, the sole point of interest is watching to see if this thing ever snaps.

The main story is set in the present day and stars Sam Stevenson as Curian, a wannabe comic-book artist who is The Chosen One - in some way and for some reason. Otheon (Robin Schnepp) is an acolyte of Aevum who wants Curian to defeat Thanatos but first he has to keep him safe from all sorts of marauding demons and oh dear God I really can’t face describing this bollocks any more. 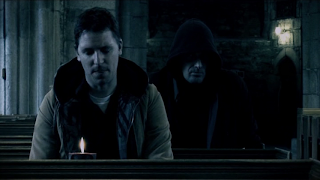 You see, here’s the problem with fantasy epics. Unless you are going to tap into existing mythology of some sort, you have to create an entire world and make us care about gods and demons and prophecies and all sorts of malarkey that we have never heard of before. And that’s really, really, really difficult to do. Like so much other cut-price high fantasy, Nightscape: Dark Reign of Thanatos comes across as nothing more than a bunch of silly names doing inexplicable things for reasons that we neither know nor care about. I’m afraid it’s all just very, very boring.

Nightscape was produced, written and directed by two students from Plymouth University on a budget of about £3,000 and hey, all credit to them for putting this together. The photography, editing and special effects will stand them well as a show-reel - but that doesn’t mean that Nightscape itself is actually watchable or entertaining. In fact the one thing that stood out in my memory after finally making it to the end of what seemed like a week of sword fights, demon chases and wobbly axes was an unintentional repeated cock-up on the soundtrack.

Every time a character draws their sword, there is a ‘schhhh!’ noise on the soundtrack: the sound of a sword being unsheathed from a scabbard. The problem is that most of the swords are carried just in belt loops which, you know, wouldn’t make that noise. And once you spot this, it is impossible not to watch out for it every time a sword is drawn. Which is pretty frequently.

Produced in 2009, Nightscape was picked up for distribution by Reality Entertainment (the subdivision of Chemical Burn that releases all of Philip Gardiner’s films and dodgy conspiracy theory documentaries) who put it out on US disc in September 2012. The only recognisable name in the cast - indeed, the only actor with any other credits - is Julian Lamoral-Roberts from Bordello Death Tales, Nazi Zombie Death Tales and Chinese Burns. Cast aside, the credits consist almost entirely of Lenoir and Osgood, credited separately or together with direction, script, production, casting, props, costumes, locations, music and all points inbetween. 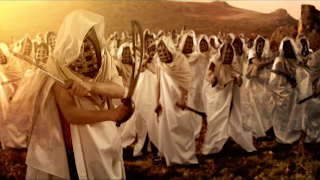 I feel a bit bad criticising the film because it is an achievement, but it’s an achievement that very few people will see because it’s so long and tedious. Lenoir preceded this with a sci-fi short, The Fabric of Life, and followed it with an Aleister Crowley biopic for Reality Entertainment which actually played at the London International Film Festival. Osgood is now apparently a management consultant.