Jenny Ringo and the Monkey's Paw 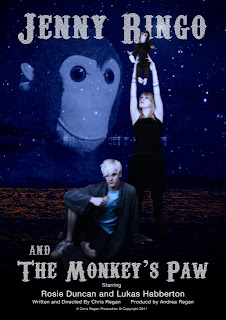 This is one of those films which you have to think about for quite a bit afterwards to work out what works, what doesn’t - and why.

There were a few obvious points that occurred to me while watching it. The opening is a spot-on spoof of pretentious French art films. I liked that and the way it segued into the main film. That goes immediately into the ‘credit’ column.

On the other hand, an obvious debit is that the film is too long at 25 minutes. It outstays its welcome. The whole thing could be a lot tighter and probably wrap up at 15 minutes. Then again, there’s a plus point for acknowledging WW Jacobs in the credits. There are also a couple of fun little animations and an enjoyable willingness to play with form and structure.

We all know the story of the monkey’s paw which grants three wishes. While this isn’t a spoof of the actual Jacobs story, it does use the same basic set-up in that the wishes are not thought through and create unforeseen problems.

Jenny Ringo (Rosie Duncan, who was in an episode of The Inbetweeners) is a gothette living in a Brighton flat with her best friend Gavin (Lukas Habberton aka Luke Sibston: Spring Heeled Jack). They’re both straight but not an item and there’s a deliberate, explicit lack of sexual tension between them. I applaud that. I’ve always liked the non-sexual, non-romantic M/F chemistry. Mind, it will never last. I once co-wrote a sitcom called Zoe’s Room about a separated man and a divorced woman who were lifelong best friends. We were very careful to make sure their relationship was as platonic as Bob Ferris and Terry Collier. Yet all the comments we got back were ‘I love the sexual tension between the characters.’ People just expect any straight, unattached man and straight, unattached woman to end up as a couple. It must be a tradition or an old charter or something. 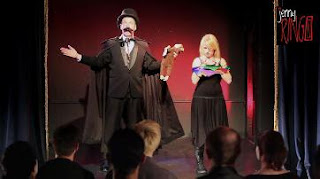 But I digress. Jenny goes out to work each day (though we’re not shown this or told where) while unemployed Gavin slouches around the flat doing nothing. One day he meets a stage magician with an extravagant false moustache on the sea-front and accepts from him the paw of a cuddly monkey, which will grant him three wishes. Unfortunately he wishes for two friends who then won’t leave him alone (Scott Haney and Dominique Bull) and, when stoned, for a fabulous pizza, thereby wasting the third wish which could have got rid of the ‘friends’.

There’s an ambitious original song and dance number featuring four painted-face ‘ghost dancers’ which works and then a curious sequence in a small theatre which doesn’t really work although I liked the magician (played by Doctor Who audiobook writer Simon Messingham). He was an interesting and nicely ambiguous character.

But I think here is where the film falls down, because Jenny and Gavin aren’t particularly interesting characters. Jenny shows her spunky, cynical side occasionally and this could have been played up, but Gavin just seems completely wishy-washy. Not even pathetic, just a bit, well, bland. And I really didn’t feel that there was a close relationship between them.

In any comedy team, of however many characters, there have to be equal and opposing forces keeping the relationship(s) in stasis. Whatever is pulling or pushing them together has to be balanced by something pushing or pulling them apart.

Bob and Terry, for example, were pulled together by being best mates but pushed apart by the clash between Bob’s middle class aspirations and Terry’s working class contentment. Harold and Albert Steptoe were pulled together by deep-rooted family loyalty but also pushed together by their circumstances; neither could survive without the other. But mutual apathy pushed them apart. Same with everyone from Laurel and Hardy to Bill and Ted. There’s got to be something there. 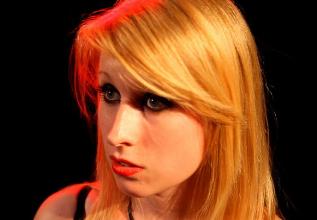 Despite his slovenliness and untidiness, Jenny never seems exasperated with Gavin, nor does he seem bothered by her. A good comedy relationship is like a marriage: bickering and arguing because of love and loyalty. I just don’t get that with Jenny and Gavin.

What it boils down to is this: a missing ingredient. The one thing this film needed, which it lacks, but which hopefully the film-makers can inject into the proposed sequel. And that missing ingredient is... zing.

Jenny Ringo and the Monkey’s Paw lacks zing. Zing isn’t essential for comedy, but it is essential for a surreal short comedy about an increasingly problematic situation. Zing isn’t the same as pace but pace is, I believe, an essential aspect of zing. Monkey’s Paw (written and directed by Chris Regan: Ten Dead Men) seems stuck in a low gear when really it needs to start accelerating early on and then build its speed as things get worse and worse and - just when it looks like the problem is solved - even worse. Then the zing needs a final pow as disaster is narrowly averted and everyone - characters and audience - can breathe a sigh of relief.

I’m not suggesting that the film-makers should have turned this into some sort of farce, but more zing would make the film shorter too. And tighter and punchier. It’s an old rule of screenwriting that you should enter every scene as late as possible and leave as soon as possible, to which one could add a corollary that between entrance and exit should be only what is needed for the scene, in terms of plot and character development. More zing would have given Jenny and Gavin more character and their relationship more spark. 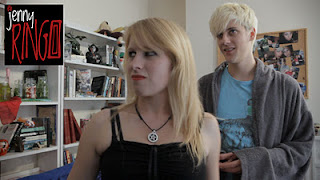 Monkey’s Paw just seems laconic, unfortunately: the direction, acting and editing all feel like they’re holding back. Which is frustrating because there’s a good, funny 15-minute film in here. But instead of struggling to get out, it’s just lounging around inside the actual 25-minute film with plenty of leg-room and a comfortable pillow.