In a historical prologue we see the evil tyrant Mekin (Thai superstar Winai Kraibutr: Nang Nak, Snaker, Krai Thong) captured and imprisoned, and his lover (Pissara Umavijani) killed most unpleasantly. A series of hooks are attached to her face, which is then ripped off and presented to Mekin. Cool! Distraught, he entombs himself in some sort of magical elixir, awaiting rebirth.

In the present day, Narudom (Kongkapun Sangsuriya: Win Yarn Tee Took Sarb) is the only surviving heir of the Prachart family, who has just graduated from university in India and plans to now settle down and marry his sweetheart Chotirot (Pornthip Wongkitjjanon). Narudom is a nice guy but starts to change when he comes into his inheritance, the palatial mansion known as ‘Payamek Castle’. While poring over an obscure Tibetan holy text about immortality which he picked up on his travels, Narudom accidentally restores Mekin to life - as a vampire. 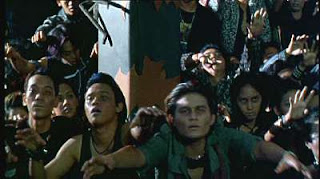 Of course, like any good tyrant-turned-vampire, Mekin seeks the reincarnation of his lost love, who turns out to be Romanee, girlfriend of Narudom’s best mate Wittawas (Ninnart Sinchai: Body Jumper). Narudom becomes Mekin’s servant while Wittawas and his companions try to thwart his plans.

What we have here is, to some extent, a Thai version of Dracula, albeit a very loose one. It certainly trades on European vampire iconography - all gothic set design, flowing dresses and stone sarcophagi - rather than native Thai superstitions, which makes it both odd and annoying that the DVD has no English subtitles. The above synopsis comes from a couple of summaries that I was able to track down on the web - because without subs the story is simply not followable - but there is much more to the plot. There’s an old man who gives Wittawas a magic ring which not only repels vampires but can imbue any weapon with anti-vampire properties, leading to a scene where a car steering lock magically transforms into a mystical sword. That’s a new one!

There is also a moustachioed vampire hunter who turns up without explanation in one scene to fight a vampire in a graveyard. This is one of three female vampires created by Mekin and she attracts her prey by pretending to have hanged herself. A young man helps her down and is bitten for his troubles. But our Thai Van Helsing appears with a magic whip, causing the vamp to impale herself on a spike. Mekin then appears, absorbs without flinching whatever magic the vampire hunter can fling at him, then takes his vampire bride and flies away, transforming mid-air into a giant eagle (one of several quite good CGI effects).

The film moves into a whole new area towards the end when Mekin calls forth an army of Romero-esque zombies who lay siege to Payamek Castle. Fortunately a squad of riot police arrive - followed by a SWAT team abseiling down from helicopters! The cops blast the zombies with copious amounts of automatic weaponry which has only a temporary effect. Fortunately our heroes, including Van Helsingthikul and his magic whip, are able to reduce the monsters to enjoyably horrific crumbling skeletons with their various magic weapons.

Among the other delights on offer is a scene of Narudom and Chotirot exploring the mansion’s catacombs which features swarms of CGI cockroaches, rats, bats and snakes. These shots are repeated under the end titles, without and then with the effects, which is a nice touch. We also get to see the three vampire brides attack a man underwater - another interesting twist. 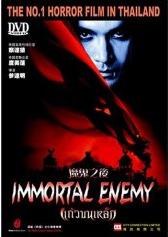 Kaew Kon Lek (also known as Immortal Enemy) is an entertaining, well-paced horror flick with enough special effects to keep western viewers interested even without subs. It’s not particularly gruesome, despite the face-ripping in the prologue, and what gore there is on show is only seen fleetingly. The film opened theatrically in Thailand in March 2003 but doesn’t appear to have played any western festivals (making the seven-minute extract that I showed at Leicester Phoenix Arts in 2004 effectively its UK premiere). I bought my DVD, which sadly has no extras apart from 12 chapters and a 2.0/5.1 sound option, from the ever-reliable eThaicd.com.