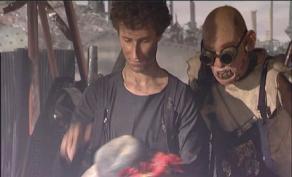 Ironwerkz was a big hit at the 2007 Leeds Film Festival and you can see why. It’s a skilfully crafted, imaginative fantasy tale that’s not a moment too long or too short.

On an island in an industrial fantasy world, three men sort scrap. The two older ones - who are credited as ‘Pa’ (Somerled Mackay, who played the title role in British superhero indie Night-Wolf) and ‘Grampa’ (Andy McQuade: Meat Me) - are both quasi-cyborgs, with heavy, mechanical arm extensions and other body modifications. The youngest man, credited as ‘The Boy’ (Matthew Lockwood), is a dreamer, his hopes intact and his heart secretly touching that of the boss’ daughter.

This is a superbly realised setting, mixing props, prosthetics, sets and CGI to create a believable but utterly fantastic world which reminded me of the work of China Mieville. Watching Ironwerkz I was inexorably drawn to the question of whether this is the first film that can be defined by the to-now solely literary genre of ‘new weird’. Not that I’m sure anyone’s certain what constitutes ‘new weird’ anyway, but this is certainly something beyond steampunk. 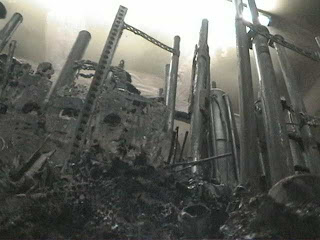 The story, told through a series of wordless scenes, concerns the young man’s discovery of a companion among the rubbish - a shop window dummy which he smuggles into his room in defiance of the rules. When the other two men discover this, they can only destroy it because such things are apparently not allowed. But then, in a positively Gilliam-esque scene, they give the young man a birthday party at which initial bemusement and uncertainty turns to joy which then turns inexorably to horror.

While the actual plot points, including the shock ending, are sometimes predictable, the production as a whole is knockout with good cinematography, direction and acting and superb design. An opening scene with a well-dressed couple who I’m assuming our the boss and his daughter - they’re credited as ‘The Caller’ (Lindsey Mack) and ‘The Girl’ (Anna-Marie Wayne: Stupid Teenagers Must Die!) - gives the story a founding and a perspective, not least in the visitors’ quasi-Victorian costumes. This leads into a terrific CGI shot of the island as the couple leave by cable car, which is worth the price of admission by itself.

If I’m being picky, the only fault here is that the film does not establish the scrapyard as a family business. I assumed that the three men were colleagues, the youngest being maybe an apprentice. It’s not immediately apparent that the bald man (Grampa) is a generation older than the one with sideburns (Pa) because the former is more heavily modified and mechanised - but I suppose the additional modification points to a longer life. This isn’t really a criticism because the film works equally well whether the three men are viewed as family or co-workers. 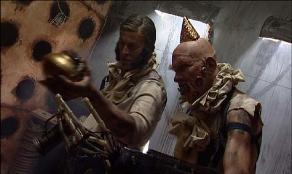 Ironwerkz was funded by the Yorkshire Media Production Agency, who have been behind a lot of fantasy and horror pictures over the years, as part of the UK Film Council’s ‘Digital Shorts’ scheme. Among those helping to create writer/director/producer Mike Kehoe’s vision were cinematographer Liam Sanderson, editor Ian Jackson, art directors Julie Anderson and Philip Lewis (both also on Night-Wolf), composer Ethan Lewis Maltby and model-maker Paul Lewis. The special effects make-up is credited to Mark Kilburn who previously worked on Creep and Minotaur and among half a dozen credited visual effects artists is Arif Majothi from Dark Raven Digital who worked on Warrior Sisters and Kingdom. And a special tip of the hat to Michael Walters, the chap who lent the production a fabulous 1926 Garrett Undertype Steam Lorry that doesn’t look at all out of place in the industrial fantasy world of Ironwerkz.