The Invisible Atomic Monsters from Mars 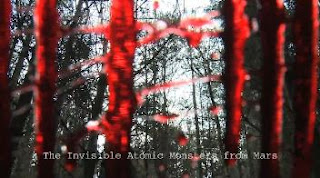 Sometimes it can take me days to write one of these reviews. I’m hoping this won’t take so long. In general, there is an inverse relationship between quality and review length. Most of my really epic reviews have been either awful or fascinatingly weird in a way that most people would find awful. My only really long reviews of films that I loved, off the top of my head, are Ultraman: The Next and Best Worst Movie.

This one might be quite short because The Invisible Atomic Monsters from Mars is, in a word, superb. Quite, quite excellent. A marvellously inventive take on the zombie genre (they’re not zombies and no-one calls them zombies but, to all intents and purposes, they’re zombies) filmed with sensitivity and skill featuring a uniformly brilliant cast.

Yes, it’s got a cheesy and inappropriate title. I’ll explain that at the end.

A prologue features a young professional (Beth Bainbridge: Zombie Cops from Hell, newlydeceased.com) out jogging in the countryside who is surrounded and attacked by a bunch of savage men. They’re called ‘bleeders’ in this film and are distinguished not by rotting flesh but by copious bleeding from their faces and elsewhere. The schtick is that a self-replicating nanodroid has been brought back to Earth from Mars and is spreading across the population. Victims’ constant loss of blood drives them to refresh their supply by killing people, who then become infected and rise up after death to join the bleeders.

Zombies, effectively, but in a clever way.

This is a future time when human exploration has reached the outer Solar System but because we never see any towns, cars etc the world looks very much the same as now. There’s just the occasional clever line like a throwaway dialogue reference to “the last remaining Maldive” to remind us we’re in the future. In that sense, it has a sort of retro, European feel to it.

The far-too-good-looking Daniel Fine is a famous astronaut, an interplanetary explorer credited only as ‘The Pilot’, who has returned to our planet and somehow descended from his crashing spaceship into the countryside, away from the chaos of collapsing civilisation. He is literally the man who fell to Earth and is carried to safety by feisty, Irish Mary (Nichola MacEvilly, who also produced) and posh, English Sam (Stephen Carlile: Brideshead Revisited redux). They are not a couple, just sheltering in the same isolated house. Mary calls Sam ‘porno’ because, for reasons which become clearer later on, he has a dirty mag which he never goes anywhere without.

With the food running out, Sam sets off on his own but Mary stays and tends to the Pilot who eventually regains consciousness. Together they set off for the coast, hoping to find a boat to get them out of England, though it’s not clear where to. On the way, they meet up with Sam again who is now sharing a different isolated house with two women, Daisy (Naomi Hill, who played Mary Shelley in a stage production of Frankenstein) and Beth (Laura Main: Murder City) plus a silent, brooding chap nicknamed Chitchat (Simeon Willis: Stagknight) who sits in the corner all day working on a Rubik’s cube.

The middle act finds these six people sharing their thoughts about what has happened and how it affects them personally. There are four big speeches here: really, really long monologues, each of which is wholly or mostly filmed as a single, continuous take. No music, no editing, no action, just several minutes of head-and-shoulders close-up: one actor, one character recounting their recent, life-changing experience. Then the same thing but a different actor, a different character, a different story.

Each one of these monologues is a bravura piece of writing and acting. And they have been cleverly arranged in increasing order of horror. Each story is worse than the last, not because anyone is trying to best their comrades or win any sort of competition, but because each tale prompts someone else to finally open up with their own dark secret. And by the time we get to monologue number four it’s pretty dark indeed.

Everyone knows ‘show don’t tell’ so just having a character talk about what they did shouldn’t work - but it does, because of immensely powerful, yet incredibly restrained, performances beautifully polished by amazingly confident direction. If we were shown the described events in flashback, the film would be gorier, maybe even more horrific, but wouldn’t be anywhere near as frightening. These are scary, unnerving stories. The whole sequence is simply stunning. The denouement appalling.

And so to a final act as our group set off together for the coast. Interspersed in the action is a studio TV interview with a Government scientist dove (Gemma Layton) and a military top brass hawk (Gil Sutherland). The interviewer is Meridian Tonight’s Phil Hornby, who joins Alan Towers from Midlands Today (Demagogue, 1998) in the select group of regional TV presenters who have played themselves in horror films.

The scientist is named as ‘Vanessa Helsing’ and the soldier as ‘Colonel G Romero’, cheap gags which seem unnecessary and out of place in what is otherwise a very serious and often quite intense film. The interview takes place early on in the outbreak when the authorities are still unsure what they’re dealing with; there are also talking head snippets of Helsing and Romero speaking after the fact. 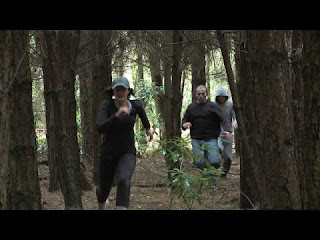 And that’s about it, to be honest. This is a film about characters. It doesn’t shy away from the dangerous cannibalistic violence of the bleeders, especially in act three, but that is far from being the focus of the film. This is not just another zombie flick and I suspect that hardcore zombie fans won’t enjoy it very much for that reason. But for the rest of us, this is simply wonderful.

Here’s what is even more amazing, and explains the cheesy, B-movie-style title. This film was made as part of the 28 Days Later film challenge (like The Horror of the Dolls). The whole thing was written, shot and produced within four weeks. (Well, strictly speaking it was done in 30 days because the version I was sent was a slight tweak that benefited from a couple of extra days’ post-production. Just sound-mixing and that sort of stuff.)

To make a film this good under normal circumstances would be worth applauding. To do so on a tight schedule, with a minimalist budget and from an absolute standing start is simply magnificent. Adrian Pinsent wrote the script in two weeks, from a story which he devised with Tim Hunt, then the two shot for a week, with Michael Carney shooting the TV studio stuff (which is included unedited as an extra on the DVD). Then a week of post-production and bingo. And the fact that twice as long was spent on getting the script right as was spent filming the thing really, really shows.

In the 28 Days Later challenge, film-makers were given a title and sent off to make a 70-minute feature film in four weeks. I love how Pinsent and Hunt took what they were given - the cheesiest of 1950s B-movie titles - and came up with an idea that makes sense but has enormously more dignity. These nanodroids are indeed invisible, they are indeed atomic (in the sense that they are basically the size of a few atoms) and they do indeed come from Mars.

The film is available to view online at DailyMotion and elsewhere but realistically this could justify a release, at least straight to DVD. Movies much worse than this, movies that with the best will in the world are semi-amateur affairs and look it, somehow get released. With a change of title, this one could be a goer.

Anyway, you know my system by now: how well have the film-makers managed to achieve what they set out to do with what they had available? A film that is as good as it could possibly, conceivably be merits an A. And I save those oh-so-rare A+s for films which are actually better than they could conceivably, possibly be.