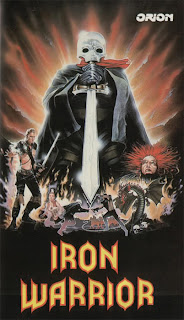 More bonkers Italian sword and sorcery - I can’t get enough of this crap and yet I’ve no idea why. As usual, Miles O’Keefe is a warrior named Ator, and as usual this one (Ator il Guerrireo di Ferro) has nothing to do with any of the other Ators in other movies. Much like Maciste and Samson in peplum films, and Django and Sartana in spaghetti westerns, Ator was a handy, generic name. Sometime Tarzan O’Keefe also ‘played him’ in Ator the Fighting Eagle (1983) and The Blade Master (1984).

The battle between good and evil is personified by two witches: beautiful, olive-skinned Deeva (Iris Peynado: The New Barbarians) and wizened, flame-haired old crone Phaedra (Elisabeth Kaza: Castle Freak). The brothers Ator and Trogar are destined to do great things so Phaedra steals Trogar and for this is banished for 18 years. Deeva mentions in passing that she has granted the king a daughter.

Fast forward to the eighteenth birthday of Princess Janna (Savina Gersak from, erm, Curse II: The Bite), which is interrupted by the arrival of Phaedra, followed by her warrior Trogar. As it says on the video sleeve, he is: ‘Born of evil sorcery. Half man, half spirit. Total exterminator.’ What he actually is - is a total Darth Vader rip-off. The boots, the gauntlets, the cloak, the shoulder-pads, the sword - right down to the asthmatic breathing! But instead of Vader’s black helmet, Trogar wears a shiny chrome skull and a red neck-scarf. (The man behind the mask in this instance is Franco Daddi who was second unit stunt co-ordinator on Bill and Ted's Excellent Adventure!) 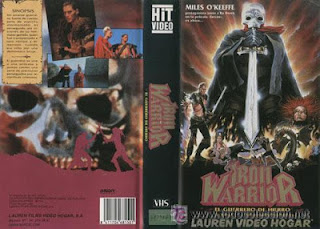 The bulk of the film has, as one might expect if one has seen plenty of these things (and I have!) no discernible plot. Ator and Janna do a lot of journeying, occasionally defeating some nameless, faceless soldiers, presumably under the command of Phaedra, and occasionally facing off against Trogar himself. There are a few attempts at a story, with Phaedra transforming herself into a young woman, and an impostor claiming to be Janna’s royal father. Eventually Ator and Janna track down Deeva, who sends them to an island that has risen from the waves (a decent model, to be fair). There they must locate a gold chest, but Phaedra tricks, imprisons and impersonates Deeva.

It all ends up with the good guys winning, sort of, somehow. But it’s all complete nonsense. The film makes full use of its locations on Malta and Gozo and gives good views of those islands’ cliffs, caves and ruins - even if one of the ‘ancient castles’ has metal steps and railings for tourists! Very disappointingly, although the video sleeve painting is mostly accurate, nothing even faintly resembling the dragon depicted ever appears. Boo.

Bradley/Brescia’s gloriously psychotronic career stretched from latter-day pepla such as Revolt of the Praetorians (1964) through westerns (The Colt is My Law, 1966) and war movies (Kill Rommel!, 1969) to sci-fi hoopla like Battle of the Stars (1977) and Reactor (1978) - plus bona fide trash classic Amazons Against Supermen aka Superuomini, Superdonne, Superbotte (1975). He died in 2001.

But Iron Warrior is most notable for being (apparently) the only narrative feature film cinematography credit for the charmingly named special effects cameraman Wally Gentleman. Born in Britain in 1926, Gentleman started work as a camera assistant in 1943 and later emigrated to Canada where he died in 2001. And 2001 is his most famous work: he collaborated closely with both Clarke and Kubrick, who sought him out after being impressed with his work on a 1960 National Film Board of Canada documentary called Universe. 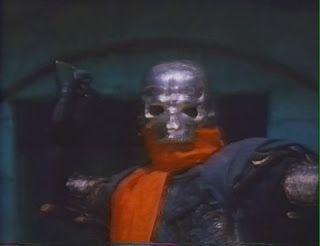 Gentleman is regarded by cinematographers as the father of special effects photography, his other credits including Black Narcissus, Great Expectations, Oliver Twist and The Red Shoes. Quite how he ended up behind the camera on a piece of tat like this, God only knows. His only other Italian credit is Chi Sei?/Behind the Door in 1974.

Iron Warrior is utterly disposable rubbish, but with a certain naive charm. Truly it is written: they don’t make them like this any more.