I wrote the first English language preview of this film for the old SFX site in 2000, based on a promo reel I saw at Cannes. Having finally gotten hold of it (albeit on an unsubtitled VCD) I’m pleased to say that my initial enthusiasm was warranted. This is a really good, fun film.

At first glance, it appears to be a rip-off of ET, with a small, silver ball substituting for the wrinkly alien (rather ironic, given that ET was itself “influenced” by Harley Cokeliss’ Glitterball!). In fact there’s a melange of influences, with nods - whether intentional or not - to The Last Starfighter, Independence Day, Replicator and Star Kid (which was itself basically The Guyver meets Power Rangers), plus the most blatant product placement since Mac and Me. But this is no simple clone - it’s a hugely enjoyable kids film with plenty of ideas of its own.

Ten-year-old Yusuke Sakamoto and his three pals - Toshiya, Hidetaka and Misaki (on whom Yusuke has a crush) - discover a small, spherical robot which has apparently crashed to Earth. The robot introduces itself as Tetra and somehow recognises Yusuke. Tetra builds himself a small body and has fun with the kids, who hide him from adults. Then they befriend Soichiro Kanzaki, inventor and electronics-shop owner, whose experiments even include a very crude form of time travel (he transports a drawing of Pikachu from Pokemon!).

Meanwhile, a huge alien armada is approaching Earth and a shape-shifting ET attacks and cocoons first Soichiro’s sister-in-law Noriko and then the inventor himself. The duplicate Soichiro is immobilised but later escapes, kidnapping Misaki. Tetra meanwhile has appropriated some parts from a local robotics firm and constructed a bloody great mecha, which Yusuke pilots to rescue his friend (having already piloted a version on a video game which Tetra programmed into his Playstation 2!).

The showdown between the semi-organic alien craft and the mecha is exciting and fun, and ends with the destruction of the entire alien fleet using, of all things, a swimming pool, but Tetra is damaged beyond repair. If you don’t cry at this point, you have no soul. That would be the end, but there is a fairly lengthy epilogue, set 20 years later which explains exactly where Tetra came from and how he knew Yusuke. 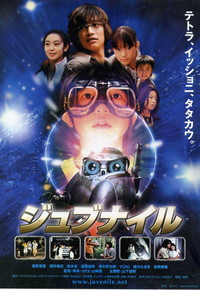 This was the directorial debut of FX supervisor Takashi Yamazaki and he did a terrific job, mixing action and excitement with some more emotional scenes, never allowing the subplot of young love to get in the way of cool explosions and robots. The CGI effects are pretty good, and the production design is terrific, both among the alien hardware and in Soichiro’s untidy workshop.

This Video CD is not only lacking subtitles but has been dubbed into Chinese without removing the Japanese dialogue track (as I speak no Chinese and very little Japanese, it made little difference) but the story is easy to follow anyway. The picture quality isn’t fab, but the image is at least letterboxed. Also includes a movie-related pop video by a singer called Zoie.