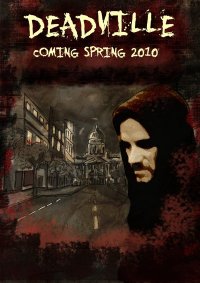 Two great things are happening at the moment, for anyone with an interest in British horror films. One is a boom in smart, original, clever and very British zombie movies. Pictures like Before Dawn, Harold’s Going Stiff and Gangsters, Guns and Zombies are constantly reinventing the subgenre. Admittedly some folk are still pumping out generic, nth generation Dawn of the Dead clones but hey, that’s fine too.

The other interesting thing is the number of really, really good modern British horror features which can be watched for free online. One such is Kieran Majury’s Deadville, which was shot in 2009, had a couple of theatrical screenings in Northern Ireland in April/May 2010 and then disappeared, eventually resurfacing online in late 2012.

This is a minimalist zombie film, in the same way as Before Dawn. Anyone wanting to see hordes of undead/infected lurching along the road should look elsewhere. Apart from one brief sequence when half a dozen zombies attack a car, there are only three living dead in the movie. Instead of being about zombies, Deadville is about people. Which is right and good, because the best zombie films are about people. 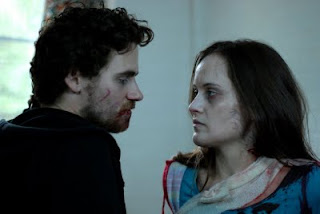 A prologue introduces us to David (Neal McWilliams: Unjust) and Ellie (Helen Ashton), meeting on a blind date; a scene that has nothing to do with zombies at all but it is essential because it lets us witness the characters and their relationship. This is an audacious move by Majury: for the first five minutes or so this is simply a boy-meets-girl romance. But it means that on the other side of the opening titles (which feature simple, gory drawings that may be storyboards), when we meet David and Ellie again, living in a cabin in the woods in a world over-run by zombies, we know and care about them. Had we jumped straight to the cabin, we would have been too busy finding out about the world.

Two things happen to start the story proper: Ellie gets bitten and David’s radio picks up a recorded message. Leaving his girlfriend but promising to return (hopefully before she dies), David sets off and finds himself in a deserted Belfast (all apparently shot early on a Sunday morning) where he meets two scientists trying to find an antidote to the living dead’s deadly bite. Robert (Hugh Yeaman: 3 Seconds My Arse) is a shaven-headed control freak, Sarah (former biochemist Lesa Gillespie: Tuesday 21st, Long Haul) is more welcoming but subdued. For the rest of the film, all we will see are these three people struggling to work together, with occasional interstitial scenes of Ellie’s survival in the isolated cabin.

Robert and Sarah are based in a community centre, working with what equipment they have been able to salvage. They need David to help them in various ways, some less savoury than others. Can he trust either of them? Neither of them? The relationships in this triangle are powerful and explored in some depth. There is an undercurrent of danger, a slice of pathos, even moments of dark humour. And some glorious dialogue which illuminates not only the characters and their relationships but the world they find themselves in. 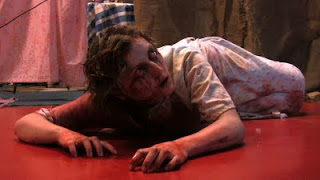 As well as being a human drama about survival, love, trust and power, Deadville is also very Northern Irish. It has that Northern Irish languor to it, a wry yet serious attitude to life, even when that life exists in a precarious post-apocalypse vacuum. There is a thesis somewhere to be written about how the region depicts itself in horror/fantasy films: this and Ditching and the various works of Yellow Fever Productions (The Knackery, Battle of the Bone etc) and, if anyone could ever locate a copy, Enda Hughes' magnificent The Eliminator.

For a movie shot on a budget of just £800, Deadville is terrific. On the technical side, some of the dialogue is sometimes too soft to hear (not helped by the gentle Ulster lilts of the actors) but this is more than made up for by some magnificent sound design elsewhere, couple with very impressive camera-work. Majury has clearly written his script around what was available to him and consequently has not outreached himself. Instead, he has produced a tight, contained, often intense drama of conflict in the face of inconceivable danger.

The four leads give their all, turning in a quartet of superb, affecting performances which should be seen by more people. Minor on-screen roles are taken by Padraig Wallace, Sarah McGlinchey, Samuel Mahadeo (Leaving the Lawn) and Andrew Jones Cassidy. 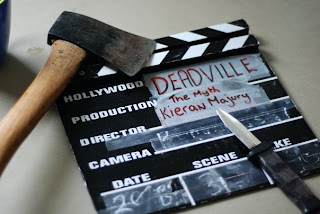 Bizarrely, at time of writing Deadville remains unlisted on the IMDB (although it is on the ZMDB!). Among those who consequently remain largely unacknowledged are sound designer John Moffatt, DP Joseph Gogarty and editor Kevin McKeown. Make-up and special effects are credited to Sasha Caughey and music to The Wintersmiths (Moffatt and Ade Mulgrew) although there are also tracks by Ben Slater, the White MCs, Roysta, Sarah Wieghell and Mental Deficiency (a sort of heavy metal Bonzos fronted by Majury and producer Alex Devant). Majury, Devant and Mulgrew are all listed as executive producers.