Don't Take It to Heart 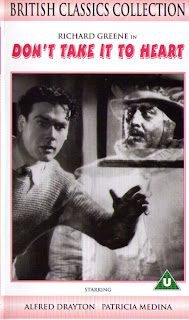 Here’s an extremely obscure wartime British supernatural comedy which merits only the briefest of passing mentions in Jonathan Rigby’s English Gothic. Sometime Robin Hood Richard Greene stars as Peter Hayward, a young lawyer who visits the tiny village of Chaunduyt (pronounced ‘Condit’) to investigate some ancient manuscripts which had been sealed inside a wall for four centuries but came to light after a bombing raid.

He falls for Lord Chaunduyt’s daughter Mary (Medina, whose extraordinary career also encompassed Snow White and the Three Stooges and the Japanese SF movie Latitude Zero!) and also discovers that the village’s other land-owner is an arrogant pools-winner named Pike (Alfred Drayton). Hayward champions the villagers - who are phenomenally inbred and all called Bucket - in their struggle against Pike, culminating in a courtroom scene where the surprise witness is the ghost of the Third Earl of Chaunduyt (Richard Bird), who was released at the same as the manuscripts.

Don’t Take It to Heart is an odd film, sometimes very amusing and reminiscent of Will Hay pictures (Moore Marriott plays a villager) or early Ealing comedies. The ghost actually only appears a few times and is massively underused, especially as the double-exposure effects are for the most part excellent (there’s also a superb miniature used for the opening bomb explosion shot). Henry Harris (Olivier's Hamlet, Quatermass 2) and George Blackwell (Night of the Demon, One Million Years BC, The Abominable Dr Phibes) were the men responsible.

The main problem is that this simply doesn’t know what it wants to be. Sometimes it’s a ghost comedy, sometimes it’s a romantic comedy, and sometimes it’s a class comedy. There’s one particularly sombre, overlong scene where the Earl’s butler - called, of course, Bucket (Edward Rigby) - bemoans to the pub landlady how the gradual disappearance of the aristocracy is hardest felt by the servants who are no longer needed. That sticks out like a sore thumb. The supporting cast is a sea of great British character actor faces, mostly very elderly (well, there was a war on!) including lugubrious music hall comedian Claude Dampier and Carry On/Rag Trade star Esma Cannon. Harry Fowler (future star of The Army Game, etc.) is a telegram boy and even Ernest Thesiger crops up as the court clerk. Writer/director Dell later worked on several Terry-Thomas films, including Brothers in Law and Carlton-Browne of the FO. For the most part the acting is good and only a couple of minor roles drift into Mr Cholmondely Warner territory. But with some genuine witty dialogue, some nicely underplayed performances and some excellent special effects, this is definitely worth searching out.

review originally posted before November 2004
Posted by MJ Simpson at 16:57