Dreamscape is amazing, a testament to the way that digital technology can unlock the creative freedom of talented indie film-makers in ways that would have seemed unbelievable only ten years ago. It combines terrific production design with seamless special effects and gorgeous black and white photography. It is only let down by a slightly under-developed script.

A wealthy businessman, seeking adventure which might be less injurious than a recent skiing trip, is introduced to Dreamscape, a company who supply custom-made dreams. They attach a little doohickey to your scalp (apparently without shaving your head!) which provides you with predetermined dreams in which you can be the hero. Over time, the device will assimilate aspects of your real life into the dreams, gradually making them more realistic.

The businessman (who, like all the other characters, is never given a name) likes the sound of this.

The bulk of the film sees him involved in a secret agent adventure, acting as a courier of a McGuffin hard-drive containing software which could bring down the entire internet (or something). He gets to shoot bad guys and punch bad guys and shag a beautiful femme fatale and play with some high-tech gadgets, including a holographic disguise. 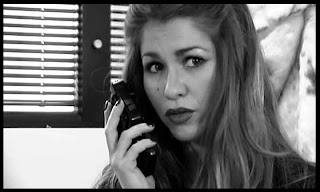 And when he wakes up, there’s a twist which, to be honest, the viewer has been expecting since before pressing ‘play’. It’s all well-acted, fast-paced action but I felt a bit short-changed at the end of Dreamscape because I was expecting a PK Dick-ian examination of the nature of reality and how we can’t trust our senses once we have deliberately deceived them. The basic premise is very Total Recall and there is something that looks extremely like a Voigt-Kampf machine in one scene, presumably as a PKD homage.

But the bulk of the film is a straightforward - if exciting, imaginative and well-crafted - spy-fi adventure and the part where (as it says on the DVD sleeve) “illusion quickly turns into nightmare as reality and fantasy blur” is just the last five minutes. It’s an epilogue when it seems like it ought to be the third act. In fact, the film doesn’t really have a third act; at a festival- and Blockbuster-unfriendly 63 minutes, it feels like it rounds things up two thirds of the way through.

Total Recall worked because we were never sure whether what we were watching was real or all in Arnie’s head. But we never doubt that the events on screen in Dreamscape are real, we never really think they’re the hero’s dream, partly because we’ve read the sleeve (even if we haven’t it’s just what you expect in a film of this sort) but mostly because large parts of the story involve characters other than our hero. In order to be even slightly plausible as ‘his dream’ the story would need to be told from his point of view, rather than leaving him off-screen for ten minutes or so while other characters several miles away discuss matters. 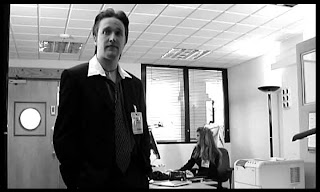 I may be criticising the film for not being something it’s not trying to be but the trailer certainly led me to believe that the SF aspects would be integral to the plot rather than just a framing device for a near-future James Bond romp. Nevertheless, the script is good, offering sharp dialogue and sufficient characterisation. And the visuals - oh boy, the visuals. I’m a sucker for black and white anyway but when it’s combined with this sort of near-future high-tech world it works beautifully. Full of digitally created backgrounds, Dreamscape is what Sky Captain and the World of Tomorrow would be like if it had been influenced by the 1990s instead of the 1930s.

The film certainly scores points for being the only feature film that I can recall seeing which is predominantly set in a convention centre. I don’t mean just filmed there but actually set in that location (“I’ve got two hundred Germans arriving tomorrow morning,” says the manageress). Although the modern architecture fits the general design well and provides some lovely angles, I never really understood precisely why all the characters were in a convention centre and a couple of scenes of a mob of press and media crews being dispersed from outside the ‘cordoned off’ building doesn’t work at all, as two ‘CI5 agents’ shoo away half a dozen people standing looking in through a window. Also hard to fathom is a later scene where the businessman/courier downloads the software from the hard drive into the scalp chip of his female partner. 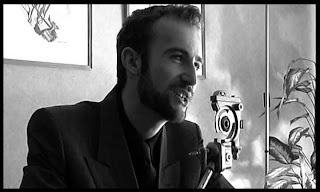 Most of the individual scenes work okay but they don’t quite hold together in a fully coherent plot (and we can’t excuse that by saying it’s a tech-induced dream because, though the central character may think it is, we can see that it isn’t). A film can’t help but be anticlimactic, alas, when the big revelation at the end is that it is exactly what we expected it to be.

But Dreamscape is a beautifully produced film. It doesn’t just look good, it feels good, it’s exciting and once the viewer abandons his preconceived notions and just goes with the post-Bond flow it’s a damn fine piece of film-making. Allegedly shot for about five grand in Cheshire and North Wales, this movie has no right to be as polished and professional as it is.

Daniel J Fox pulls triple duty as writer, director and producer and also turns in a nicely understated performance as the businessman. Magda Rodriguez (The Witches Hammer, Man Who Sold the World and a 2002 version of JS LeFanu’s Carmilla of which I was previously unaware) is good as the femme fatale. Among the other cast, Sandra Darnell - who plays a second femme possibly even more fatale than the first one - was in Sentinels of Darkness and an episode of Spooks and also worked on Alexander (as a stand-in) and Charlie and the Chocolate Factory (as a translator - don’t knock it, it’s work) while Frank Pipkin won ‘Best Actor’ at the Clwyd Community Theatre Association One-Act Play Festival 2002 for the title role in an abbreviated version of Marlowe, The Forty Minute Faustus.

Joseph Fox composed the music, mixed the soundtrack and handled the 3D computer graphics and did excellent work under all three hats. Mark Ellingham, as well as producing and acting, deserves a big hand for 63 minutes of drop-dead gorgeous cinematography (helped by camera operator - and actor and first AD - Chris Owen). 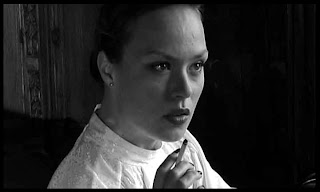 Not to be confused with Dreamscape, the 1984 sci-fi movie starring Max Von Sydow and Dennis Quaid, or Dreamscape, a 2000 Canadian four-minute short about a sculptor - or indeed with Dreamscape, a forthcoming documentary about flamingos (apparently!). Although touted as ‘the first feature from Chat Noir Productions’, the movie is only seven minutes longer than Daniel J Fox’s previous film Vendetta, a 56-minute spy thriller (produced before Chat Noir was set up) which won ‘Best International Short Film’ at the New York International Independent Film and Video Festival in 2004.

[Daniel J Fox took my advice on board and eighteen months later, the Extended Cut of Dreamscape landed on my doormat. - MJS]
Posted by MJ Simpson at 22:46