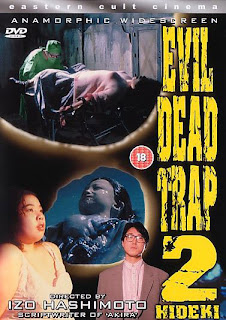 This has no connection whatsoever with the first Evil Dead Trap; one of the main characters works in TV but that’s really coincidental. This is also probably the strangest movie that Artsmagic have released so far. It’s not that it’s stylishly surreal like Uzumaki or low-budget nonsense like Junk or even plain bonkers like Wild Zero. Clearly there is a very complex, carefully worked out plot going on here, but the actual story is so eliptical that I simply couldn’t follow it.

That said, this is a gorgeous-looking film, with cinematography and lighting that beautifully shows up the copious quantities of blood. It’s brutal in places, gory in places, and supernaturally creepy in places. It’s great - I just don’t fully understand it. But given that the script is by Chiaki J Konaka, writer of the stylish but engimatic Malice@Doll, perhaps we’re not meant to fully understand what’s going on. 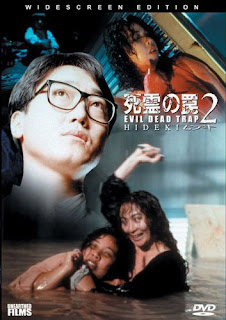 Aki is being troubled by a spooky-looking little boy whom she repeatedly spots in the cinema auditorium but who is never there when she goes to investigate, and whom nobody else has seen. Eimi is reporting on a series of brutal slayings, in which young women have been stabbed to death and had their ovaries cut out. Kurahashi is concerned that his wife Tokiko (Yoko Oshima: Ring, Another Heaven, Gamera: Guardian of the Universe) has not yet got over the death of their young son Hideki.

Eimi is unaware that Aki is carrying out these murders. Aki is scared by the appearance of the little boy one night after she has tarted herself up and picked up a couple of sleazeballs in a backstreet dive, and also sees him in the background of some of Eimi’s news reports. Kurahashi comes home one day to find that Hideki has returned - it is of course the weird kid (Shota Enemoto) that Aki has been seeing, with green-ish skin and staring black eyes.

Aki’s boss Mr Muraki (Sai Hiraiziumi, who was in Return of the Giant Majin and Gamera Vs Jiger!) recommends that she seek help from a weird sect called Shinki, presided over by a ‘psychic’ called Chio Kannazuki (Shino Ikenami: Village of Doom). Under the sect’s influence, Aki finds herself producing crude, child-like drawings of a figure bleeding profusely from mouth, hands and genitals. Meanwhile Eimi has discovered that she is pregnant (by Kurahashi) and ponders whether to have an abortion. And the murders continue...

Is any of this making any sense? Fitting together? Things get even stranger later on, when it starts to look like perhaps Aki isn’t the murderer - but if so how come we have seen her standing over the bodies, her dress soaked in blood? There’s a climactic fight - I won’t say between whom - which ultimately leads to one of the most truly extraordinary images I’ve ever seen in a horror movie. 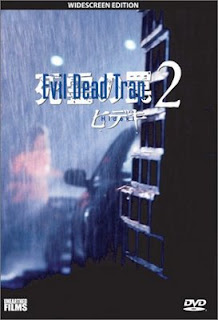 Clearly the key to all this is the troubled spirit of Hideki, which may possibly be possessing people as well as manifesting itself. But I would be lying if I said I was sure about this. On the other hand, the film is consistent in its approach and doesn’t suddenly slip into ludicrous rubber monster territory at the end like its nominal predecessor.

The photography (by Osamu Fujiishi: Hypnosis) is terrific, adding greatly to the air of unsettling weirdness. This is a very stylish, very interesting, very Japanese film. I prefered it to the first Evil Dead Trap, which was easier to follow but let down by its ending and didn’t look as great as this (Artsmagic’s widescreen transfer is as flawless as usual). Evil Dead Trap 3 followed and had no connection with either of the first two.

review originally posted before November 2004
Posted by MJ Simpson at 21:38