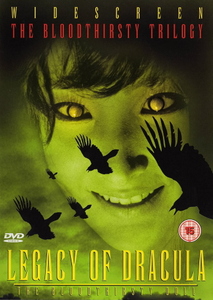 On a stormy night, Kazuhiko Sagawa (Atsuo Nakamura: Kwaidan, The Water Margin) goes to see his girlfriend Yuko Nonomura, having been away for six months. But the only inhabitants of the spooky old house are hulking, mute servant Genzo (Kaku Takashina: Lake of Dracula) and Yuko’s mother, Shido Nonomura (Yoko Minamikaze/Minazake - both names are given here), who informs Kazuhiko that Yuko was killed two weeks earlier when her car was hit by a landslide.

That night, Kazuhiko sees Yuko (Yukiko Kobayashi: Destroy All Monsters, Yog - Monster from Space) and follows her to her grave, where she begs him to kill her...

A few days later, Kazuhiko’s sister Keiko (Kayo Matsuo: Gate of Flesh, Baby Cart at the River Styx), concerned at not having heard from him, sets off for the Nonomura house with her boyfriend Hiroshi Takagi (Akira Nakao: Commander Takaki Aso in three late 1990s Godzilla films, the Prime Minister in Godzilla X Mechagodzilla, and Lord Donjo in Ninja Wars). Mrs Nonomura says that Kazuhiko left the day after he arrived, but at Yuko’s grave Keiko finds her brother’s bloodstained cufflink. Hiroshi pretends that their car is broken in order to engineer an overnight stay in the house. 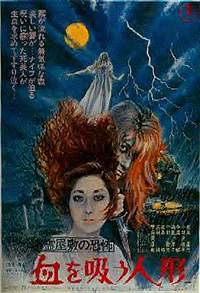 Mrs Nonomura and Genzo do their best to prevent Hiroshi from exploring, and Keiko finds a broken ceramic doll which Kazuhiko had bought as a present for Yuko, then is shocked to see Yuko in her room. The next day, the young couple go to the local town hall where the clerk who shows them Yuko’s death certificate relates the story of the family ‘curse’: twenty years ago the whole Nonomura family were shot by an intruder, except for Genzo the servant and Shido, who was traumatised, tried to commit suicide (hence the ugly scar on her neck) and then gave birth to Yuko nine months later.

After meeting with Dr Yamaguchi (Jun Usami), the local medic who signed the death certificate, Keiko returns to the house, while Hiroshi investigates Yuko’s grave. He has been told that she was buried without being cremated - and in her exhumed coffin he finds only a lifesize doll. Hiroshi believes that Yuko has become a vampire, but Mrs Nonomura is adamant that it is merely her spirit which walks abroad - it’s possible that there are subtler differences in their points of view which do not translate too well into English. What Mrs Nonomura does not tell Kazuhiko is that she and Dr Yamaguchi have sedated Keiko and locked her in the cellar with Yuko and the half-eaten body of her brother.

Chi o Suu Ningyo is probably the best of the trilogy. It was actually the first to be filmed and, as the original publicity on this DVD shows, was marketed internationally as a double bill with the second film, Lake of Dracula. Fortunately there is no sign of the tall but less than talented Mori Kishida and his terrifying white polo neck jumper in this movie, although it does use some of the same sets (described by Hiroshi as “a splendid, authentic foreign-style residence”!). It’s probably the most Japanese of the three, with Yuko’s condition - blue-ish skin, golden eyes, no fangs - owing as much to Japanese folklore as western horror films. There’s a super, and quite startling, shot near the end when she attacks somebody by scooting forward in a fast series of jump-cuts before plunging a knife into the victim’s neck. 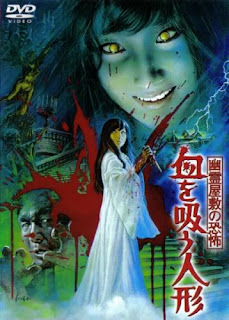 This is another good-looking transfer although it seems darker than the other two. This benefits a flashback scene of a gravely ill Yuko, which sits her bed in a pool of light surrounded by stygian black, while Genzo and her mother hover nearby like figures in a chiaroscuro painting. On the other hand, some night-time scenes - especially a fight between Hiroshi and Genzo - are so dark that it’s difficult to work out what’s going on. Extras include scans of the aforementioned publicity booklet, a portrait gallery, five very nice, crisp, black and white publicity stills and an Artsmagic trailer for the Zatoichi films.

Watch out for Sachio Sakai as a taxi driver in the opening scene. He was to Toho what Michael Ripper was to Hammer, with bit parts in many of their movies including Gojira, Secret of the Telegian, King Kong Vs Godzilla and Gorath as well as Kurosawa’s Seven Samurai, Throne of Blood and Dreams.

Entirely unconnected apart from sharing a director and a screenwriter, the ‘Bloodthirsty trilogy’ can be viewed in isolation or in any order. All are interesting, but if you only pick one, I would recommend this one.