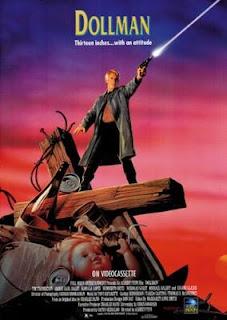 Dollman may not be the best film that Charles Band ever executive produced but it’s certainly one of his best - and from a personal point of view, this may very well be my favourite of all the Full Moon features I have watched.

Tim Thomerson (Trancers 1-5, Evil Bong, They Crawl) is absolutely superb as grizzled cop Brick Bardo, equipped with a bad attitude and the most powerful handgun in the universe. On a distant planet, he deals with a hostage situation in a laundromat where a criminal named Skyresh (Jamie Lee Curtis’ brother-in-law Nicholas Guest, who mostly does voice work but has appeared in screen in Puppet Master 5, Kickboxer 4 and even Star Trek II) is threatening to kill a group of fat people. The commissioner doesn’t like Bardo’s methods but his captain knows what a valuable maverick he is.

But this is all a prologue to Bardo, in a neato spaceship, chasing criminal mastermind Sprug in a flying saucer. Each time these two have met in the past, Bardo has blasted away another part of Sprug’s body and he now survives as only a greasy head, hovering on a couple of fanjets. (Sprug is played, under uncomfortable-looking make-up, by Frank Collison whose first credit was in a spoof documentary about 'Weird Al' Yankovic! He has since appeared in Amazon Women on the Moon, Elvira, Mistress of the Dark, 12:01, the original movie of Alien Nation and the remake of The Blob.) When both spaceships pass through some sort of dimensional wormhole, Sprug and Bardo both find themselves on Earth, specifically in a rundown part of the Bronx in the early 1990s. Problem is: due to a slight difference in scale between their race and humans, Bardo is now only thirteen inches tall 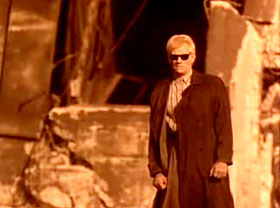 Braxton Red (Jackie Earle Hayley: Nemesis, Maniac Cop 3) leads the most successful gang in the largely lawless area while Latino single mother Debi Alejandro (Kamala Lopez-Dawson, whose TV work includes Star Trek: Voyager, Lois and Clark and Medium) tries to organise the citizens into some sort of neighbourhood watch, despite the apathy of the cops. When Bardo saves Debi from Braxton’s thugs, she takes him home (lots of great shots of Thomerson being thrown around the cockpit of his craft) where her son Kevin (Humberto Ortiz: Arcade) is thrilled to have his own ‘dollman’.

Debi believes passionately in non-violence but Kevin and the neighbours are convinced that Bardo and his still-powerful handgun are the answer to their plight. Meanwhile, Sprug the tiny flying head is offering Braxton the use of a small-but-powerful bomb as well as some outer-space healing powers.

Dollman has a few things to say about violence, law and order, principles and society, but it doesn’t really say them terribly well. Debi’s abduction by Braxton raises the hope of things getting better in the neighbourhood as several of her neighbours rush out to try and stop the young hoodlums, but there is no chance for this idea to be followed up as we never return to the apartment block. Frankly the whole film falls apart somewhat towards the end - at least in terms of plot - where it becomes a stand-off between Bardo and the goons surrounding Braxton and the captive Debi. The final resolution is disappointing and looks like the production simply ran out of money.

But this is more than compensated for by good performances all round - especially from Thomerson - and defiantly bargain-bucket special effects. In an age before affordable CGI, most of the scenes in which Bardo interacts with full-size actors use simple editing, cutting back and forth between Thomerson looking up and the other actors looking down (or peering into the three-foot-long spaceship). There are a few green screen shots which are serviceable and allow just enough shared screen time to make the situation credible, if not believable. There’s even one glorious shot where Bardo, clinging onto the side of a speeding car, is stunt-doubled by a doll. 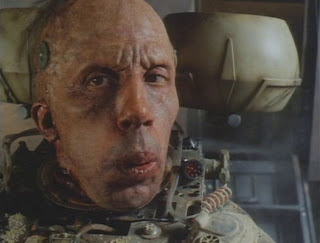 It’s the lead actor’s performance which really sells the film. Unlike other ‘tiny people’ movies and TV shows - The Incredible Shrinking Man, Land of the Giants, Honey, I Shrunk the Kids - Bardo isn’t at all worried about how he will survive. He remains exactly the same misanthropic maverick cop that he was on his home planet and the enormous size difference between him and everyone else is just one more thing making a bad day even worse. He doesn’t really want to help Debi and is increasingly annoyed at Kevin proudly showing him off to the neighbours, but he’s a cop and he has a sense of justice.

Braxton Red and his gang of no-goods are kept just this side of parody, believably cocksure rather than over-the-top eccentric. This definitely isn’t a Troma film, although there’s a slightly Tromatic element to a scene at Debi’s workplace where she and her friend Maria (Merle Kennedy: Nemesis, Night of the Demons 2, Convict 762) sort ‘toxic waste’ by hand.

Hugely enjoyable for those in the right frame of mind, Dollman was one of only two collaborations between Band and the prolific Albert Pyun, the other being 1993’s Arcade. Busy guys both, this was one of three films directed by Pyun in 1991 and one of seven produced by Band. The screenplay is credited on-screen to ‘Chris Roghair’ but there seems to be universal agreement that this was a pseudonym for David Pabian whose other Full Moon pics were Crash and Burn, Puppet Master II and Subspecies.

Thomerson worked with Pyun on eight other pictures throughout the 1990s including the first and third Nemesis movies, Blast, Heatseeker, Spitfire, Knights, Hong Kong 97 and Brain Smasher: A Love Story. Also in the cast, most of whom have worked with Pyun on other films, are Judd Omen (Dune, The Howling II, CHUD II), Michael Halsey (who moved to LA in the early 1980s after spending the previous decade acting in things like Blake’s 7 and Are You Being Served?!), Frank Doubleday (Space Rage, Escape from New York), New Zealand-born Vincent Klyn (Cyborg, Nemesis, Final Equinox, Urban Menace), John Durbin (Demonwarp, Mutant on the Bounty, Cyborg 2), Luis Contreras (Suburban Commando, Alien Avengers II), Eugene Robert Glazer (Scanner Cop II and a regular on La Femme Nikita), Samantha Phillips (Phantasm II and III, Weekend at Bernie’s II) and overweight actress Laurianne Jameson who plays one of the fat ladies held hostage in the prologue and was also in that unforgettable sex scene in The Dark Backward.

The cinematographer on Dollman was George Mooradian who worked with Pyun on at least twenty other features including two Kickboxers and all four Nemesis films. His other credits include Retroactive, The Hitcher II and Pterodactyl. Producer Cathy Gesualdo, who served similar duties on Arcade, was Second AD on Friday the 13th Part VI and A Nightmare on Elm Street IV.

Special effects are credited to ‘Frazee’, actually Logan Frazee who also worked on Nemesis, Blade Runner, The Towering Inferno, at least four Star Trek movies and Satan’s School for Girls. Bardo’s spaceship was built by Gene Warren (Nightflyers, True Lies) and Leslie Huntley (Spacehunter: Adventures in the Forbidden Zone, Fright Night Part 2, Magic in the Water). Special effects make-up is credited to Mike Smithson who worked on things like House II, Scanners II and The Exorcist III and now works on stuff like the Spider-Man movies.

Production designer Don Day can boast Frankenstein General Hospital, Martians Go Home, Shadowzone and 3 Ninjas Knuckle Up on his CV. Editor Margaret-Anne Smith was a Full Moon regular throughout the 1990s, working on Trancers III, Prehysteria, Puppet Master 4 and 5, Robot Wars and Magic Island, while composer Anthony Riparetti was (and indeed still is) a frequent Pyun collaborator. His music can be heard in Alien from LA, Heatseeker, the Nemesis films, Omega Doom, and Tammy and the T Rex. 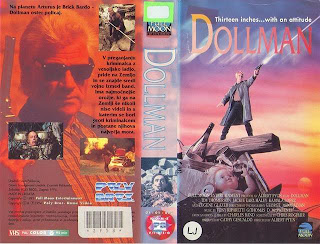 With such an array of top talent (hey, in my opinion at least!) on both sides of the camera, it’s no wonder that Dollman is such an eminently watchable movie. Charlie Band would have loved to spin it out into a franchise but in fact there was only one proper sequel, Dollman vs Demonic Toys (which I haven’t seen) although Thomerson appears briefly in character in an epilogue to the appallingly poor Bad Channels.