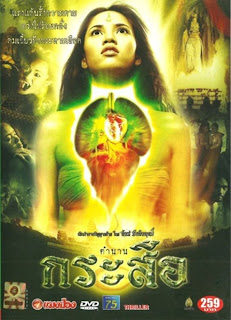 Blimey - you wait years for a ‘flying vampire head with guts hanging underneath’ movie and then two come along at once. After watching Mystics in Bali, I popped this thing into the old DVD player and was delighted to find that it has the same sort of monster. (Well, near enough. This is a krasue - hence the original Thai title Krasue - which is the Thai equivalent of the Malaysian pelagganan seen in Mystics. In Japan the same thing is rather amusingly called a krappa.)

The prologue is a big battle scene - dozens of extras, plenty of horses, very impressive. It’s the year 1763 BE and Knight Harnsuk from Whiang Chiang-in City in Thailand is attacking the Khmer Capital City. King Suranetaravoraman is killed and his haughty, vain, 19-year-old niece, Princess Tarawatee, is taken prisoner. (I was taking notes!)

A mere three minutes in, just as I’m getting used to the fact that this is a big budget production and the disc is subtitled to boot, there is one of the most realistic beheading shots I have ever seen. I actually watched this through in slo-mo several times and still wasn’t sure how it was done.

Harnsuk wants Tarawatee for his wife but finds that she is in love with Fajang, a Thai spy who worked as a servant in the Khmer palace. Fajang is executed (I think that was him we saw getting his head chopped off) and Tarawatee is condemned to be burnt at the stake. But in the next prison cell is a village woman, Keaw, who observes that Tarawatee is the spitting image of a girl from her village, name of Daow. 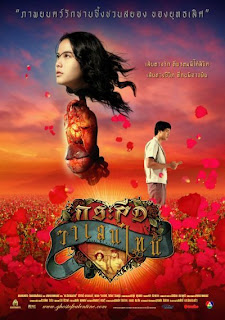 An old witch called Tala, who claims to have great great great great grandchildren, visits Tarawatee in prison and transfers her life essence to her, so when the princess is set afire her head lifts off in a green glow and goes flying away towards Keaw’s village - where bad guy Teur’s father is using voodoo magic to kill Daow because she rejected Teur in favour of her fiancee Roong.

And that’s all just the prologue!

At Daow’s funeral, she suddenly sits up - it’s a miracle. But has she really come back from the dead, or is her body possessed by an evil spirit? What do you think, viewers?

The other girls (who all look and dress exactly alike so it’s really difficult to tell which one is Oy and which one is Uey) are suspicious that Daow seems to have little memory or knowledge of the village. More to the point, a ghost is at large, slaughtering local livestock. Everyone calls it a ‘will-o-the-wisp’ (interesting use of an old English expression in the subtitles) but all that anyone has seen is a flying, glowing, green thing so it is generally assumed to be the old woman, Chan, who lives alone on the edge of the village.

In actual fact it is of course Daow’s head, which detaches itself, dragging her heart, lungs and intestines out through her neck as it flies away. Except it’s really Tarawatee’s head, complete with big vampire teeth and a squiggly symbol on her forehead. As suspicion points towards Old Chan, so Daow/Tarawatee arranges more circumstantial evidence in the direction of the old woman’s hut. Meanwhile, when her head is attached, she is still fending off the attentions of both Roong and Teur.

Eventually the traditional ‘mob with flaming torches’ attacks Chan’s hut but the old woman is taken into care by local monk Kru Baa Khan, so when the attacks continue it’s clearly not her. There’s one particularly icky scene where a village girl is giving birth in one of the houses on stilts. The demonic head flies under the house, snakes its tongue up through a crack in the floor and whips the afterbirth out of a pot, leading to the classic line “Help! The ghost has stolen my baby’s placenta!” 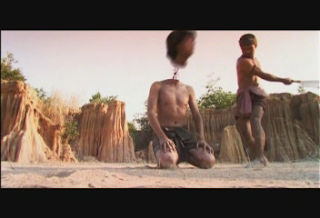 It all finishes with the villagers confronting the head who confirms to Roong and her father that she is actually Tarawatee and that Daow really is dead. She then turns into Tala (remember her - the ancient witch?) and pitches her black magic against the white magic of Kru Baa Khan who defeats her by drawing energy from a ten-armed statue. Daow’s own head magically reattaches to her body which can then be cremated. ...But a young girl walking past the ashes notices that a necklace has survived. She puts it on and her eyes begin to glow...

What an amazing film! The flying head is rendered in surprisingly good CGI, whizzing around the forest with the guts flapping underneath it. There’s one truly incredible scene where it actually fights a cobra(!) and another grisly close-up of her torso breaking open so that the inner organs can be pulled up out of it (ooh, the sound effects!). The picture looks gorgeous - those Thai cinematographers certainly know how to light a film - although the VCD takes away a lot of depth in the shadows and there’s a fair bit of artefacting. The widescreen transfer is otherwise terrific, though the poorly translated subtitles are hard work.

In a surprisingly generous package, the first disc includes six trailers: Tigress of King River (a woman soldier reincarnated as a big stripy cat), Mekong Full Moon Party (an X-Files-like drama based around the legend of the naga - a sort of giant aquatic snake - and the fireballs which emerge from the Mekong River), blockbusting historical epic Suriyothai, bonkers action flick Killer Tattoo (all guns’n’cars'n’explosions), brutal women-in-prison drama Butterfly Grey and Hollywood action stinker Ballistic: Ecks vs Sever (directed by Thai-born Wych ‘Kaos’ Kaosayananda). The Thai trailers aren’t subtitled in English but that’s okay because the Ballistic trailer isn’t subtitled in Thai. The second disc has the trailer for Demonic Beauty and forty production stills, including some behind-the-scenes shots that reveal how the beheading effect was achieved. 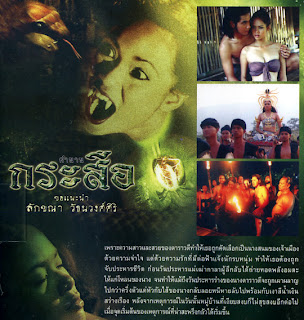 Director Banluerit is also an actor who won a Best Actor award in 2000 for his performance in historical action epic Bang Rajan. His most recent film as director is Chang Puen Kaew, a family movie about a boy who befriends an elephant. Among a cast which I can’t pin down to specific roles are Ekapun Bunluerit (aka Ekkapun Bunlerrith, presumably related to the director), who was also in the ghost comedy Porb Phee Hien, Lakana (aka Lukkana) Wattanawongsiri who was in The Devil’s Bride, Natthorn Somkanae, Chartinan Kannasut and Jitranun Thammawongsa.

Demonic Beauty is a corker of a film, though I would have liked to have seen more of the epic battle at the start and maybe a little less of the village soap opera. Nevertheless you can’t fault this movie for serving up top floating vampire head action.

MJS rating: A
review originally posted before November 2004
Posted by MJ Simpson at 13:35