In May 2008, David DeCoteau’s film Edgar Allan Poe’s House of Usher was announced as a theatrical release by Regent Releasing and here! Films. I asked Dave if he wouldn’t mind answering a half-dozen quick questions about the movie and he kindly agreed. (My previous chat with David was in 2006 when we discussed Beastly Boyz.) 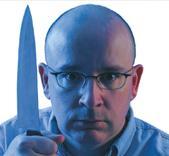 There have been at least 17 previous film versions of Poe's The Fall of the House of Usher: what does yours bring to the story that's new?
“Without revealing too much of the story my version of Usher focuses on the relationship between Roderick Usher and Victor Reynolds. We also have a much more provocative take on why the house is alive.”

Obviously this is a 'gay version' but, well, how gay is it? In other words, are (open-minded) straight horror fans going to enjoy this?
“I directed this film for here! TV which is a GLBT television network so the gay content is portrayed in a very honest way. But as with most of my more recent films the sexuality is not depicted in a vulgar or graphic way. I hope all audiences will enjoy the film. I am sure that straight male audiences will adore Jaimyse Haft. She is really amazing in this film.”

What sort of feedback have you received from your previous Poe film The Raven that has influenced how you made Usher?
“The response to Edgar Allan Poe's The Raven has been tremendous and it’s been invited to film festivals around the world. It is now playing at the Calgary Gay and Lesbian Film Fest in Canada. The Raven has a much more European feel to it. It is set in England although we shot it South Africa. Richard Johnson narrated The Raven and Robert Shaw's son Ian Shaw narrates Edgar Allan Poe's House of Usher.” 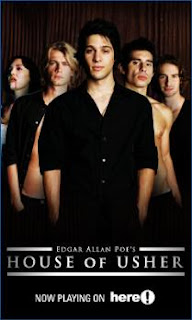 This is your first collaboration for some time with both producer John Schouweiller and DoP Howard Wexler: why was this the right time to get back together with them?
“John and I started out at Roger Corman's New World Pictures back in 1980. We started making films together in 1987 on Creepozoids. It has been a while since John and I had worked together. He was busy producing films like Gods and Monsters as well as running his toy company and I was on a plane travelling around the world shooting movies in Romania, the Caribbean, Africa and Canada. Usher was a good excuse for he and I to reteam and make a movie in LA. I've collaborated with Howard Wexler since 1982. He's one of the busiest cameramen in LA so I was thrilled he was available for Usher. He is very gifted and gave Usher a gorgeous look.”

You have a British screenwriter, Simon Savory: what difference has that made to the script?
“I met Simon on MySpace. He had posted some modelling pics and I was looking for British actors for a film I plan to make in the UK. I e-mailed him and his response was: ‘I'm not a model, I'm a screenwriter.’ So I asked him to send me a writing sample. He did. I loved it. We've been working together since. I am a huge fan of anything British. From Ealing to Hammer, from Benny Hill to Monty Python, from James Bond to Gerry Anderson. We photographed a few shots in the UK for The Raven but I'd like to do a whole film there soon.” 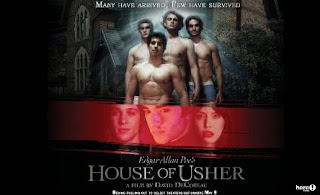 What were your thoughts when you found out that Usher was going to get a theatrical release?
“Thrilled. This film was very tough to make and I'm glad the hard work has paid off. A theatrical release is a true stamp of approval.”