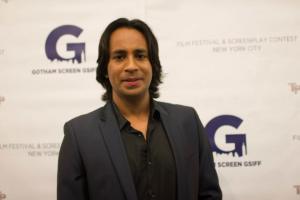 How close is the finished version of Red Kingdom Rising to the version you had in your head at the start of the project?
“Very close. The end result came from extensive planning and persistence in ensuring that the initial visual vocabulary that I had created in the concepts and script would translate easily to the finished version, particularly with the very low budget I had. There are naturally some elements that could have been surpassed with more money and time but fundamentally the story has been told with no compromise and the visual world of the film not being affected. It was tricky since Red Kingdom Rising is a very visual film and I couldn’t skim on the details with that.”

At 73 minutes, RKR is only just feature length. Was that a deliberate choice? Do you think there’s room to expand the story?
“The running time was unfortunately entirely due to the budget. The core of Red Kingdom Rising is a very personal story; how the protagonist must finally confront her fears, go through a psychological transformation and emerge as her ideal self. With a bigger budget I may have expanded the narrative in terms of exploring the dichotomy of the real world and dream world and delving further into the concepts Lewis Carroll explored. However due to the budget I had, I zoomed in and focused upon the immediate story; the story of a survivor of child abuse.“ 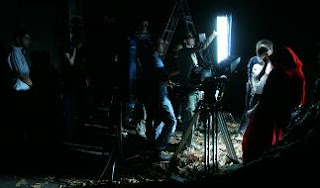 How did you assemble your cast and crew?
“The cast and crew were all sought through various methods; networking, agencies, online portfolios. Everyone worked on this film on a voluntary basis which is truly commendable. Red Kingdom Rising was shot on super-16mm and therefore I allocated a crew that were familiar with that format. I come from a theatre background so I had undergone extensive rehearsals with my cast months before the shoot. The rehearsals extended beyond generic script discussions to character studies through sense and emotional memory exercises. That all enabled the cast to very much familiarise themselves with the script and characters and I was able to shoot the entire film on virtually one-takes to support the budget.”

How do you think RKR fits into the wide pantheon of Carrollian films?
“I think Red Kingdom Rising takes an honest approach to Carroll’s work, particularly his vast interest in occultism which has not really been explored on film before. Carroll’s work has sadly often been subject to superficial interpretations for purely entertainment purposes, with all of his philosophical sense being lost. There are a few works that do however grasp onto Carroll’s meanings, such as Svankmajer’s Alice and I think Red Kingdom Rising joins them. It also lends itself to a contemporary commercial viability.”

This feature and both your shorts have been based on old, well-known tales: is this something you want to explore further or are you looking to start developing completely original themes?
“As a filmmaker I’m open to any subject matter, but I’ve kind of found a niche with the subject of fairy tales. There’s an intrinsic sense of basic human evolution embedded within the nature of the fairy tale; they symbolise our greatest fears, hopes and dreams in the total accumulation of our ongoing life experiences. That’s fascinating material if handled appropriately and film is one of the few formats that can convey it due to the orchestration of sound and image. I’ll definitely like to continue to explore those themes, but while the fairytale motifs will always be a backdrop, what’s at the forefront will always be the journey of the characters within their narrative.” 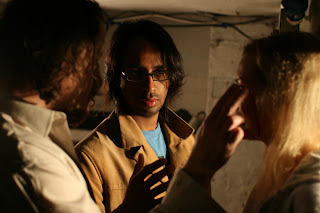 How has RKR been received so far and what are you plans for the film?
“It’s very early days and so far we’ve begun early film festival submissions. We had a private press screening last November 2011 in London, which went very well and since then the film is being reviewed. Naturally I’d like the film to gain as much exposure as possible in order to make another film! But as a filmmaker, when you make something that hits your core and comes from your core, you need to share that with an audience in a very objective way. Amidst the symbolism and poetic imagery, Red Kingdom Rising is an entertaining and striking film which I hope all audiences will enjoy.”