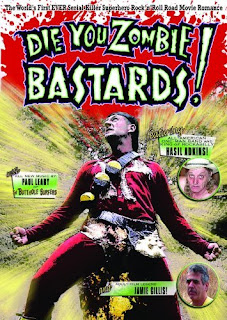 This was not what I expected. Having heard this great title bandied about - surely up there with Night of the Living Dead and I Was a Teenage Werewolf for sheer, instant, iconic status - I assumed that Die You Zombie Bastards! would be a Romero-esque comedy in the manner of Shaun of the Dead. But I was wrong. The everything-but-the-kitchen-sink tagline proclaims this to be 'The World's First EVER Serial Killer Superhero Rock'n'Roll Zombie Road Movie Romance'; and that might very well be right.

This is a deliberately cheesy, very silly, often very funny comedy which looks like it could have been made twenty years ago. The last time I saw anything like this was Josh Collins and Alex Chandon’s Pervirella and even that was a good ten years back. In point of fact, although Die You Zombie Bastards! looks like a Troma film, it was not produced by Troma, not even distributed by them. Neverthless it is the most Tromatic non-Troma film I have ever seen. It even has a cameo by Lloyd Kaufman, although that of course is not uncommon at this level of film-making - in fact, it’s almost obligatory. Even A Home for the Bullets has a cameo by Uncle Lloydy, although I must stress that DYZB! is much, much better than AHftB. 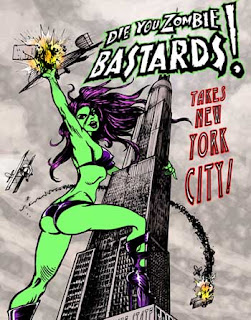 The film opens with the barely coherent ramblings of a sad old geezer who is billed as ‘Rockabilly Legend Hasil Adkins’. So far as I can tell, this is a real guy who, according to the publicity, died shortly after the film was made. You might as well fast-forward through this short prologue as it’s embarrassingly like listening to a tramp asking for the price of a cup of tea. Adkins reappears later in the film as himself, where it seems that even the film-makers are poking (admittedly gentle) fun at his seemingly random mutterings.

We open on a tropical island where three sexy sisters (Jennifer K Beal, Sadie Blades and Zhana LaRenard) are searching for evidence of a Black Lagoon-style reptilian creature which turns out to be still in existence, complete with enormous rigid phallus. The three girls are kidnapped by mad scientist Baron Vaklav Mummyhead Von Nefarious (Geoff Mosher: Toxic Avenger IV) who turns them into green-skinned zombies.

But the ‘Maldonato sisters’ are not the main characters here. Instead, we meet a cute couple of cannibalistic serial killers, Red and Violet Toole (Tim Gerstmar and Pippi Zoreoza), who delight in killing people and then whispering sweet nothings while munching on body parts. Nefarious decides that Violet is his perfect woman and kidnaps her while the couple are enjoying a picnic, leading Red to spend the rest of the film searching for Violet, having first adopted a superhero persona by donning a cape made from human skin.

His search takes him all over the world, signified by a deliberately wrongly marked map which provides some laughs on its own. He meets a stoned Rasta in a bath (Lon E Plynton), a group of Swedish nymphets led by the Amazonian Super Inga (Sandra Kennedy) and of course ‘Rockabilly Legend Hasil Adkins’. Nefarious, meanwhile, is using his evil scientific devices to make Violet even more perfect. 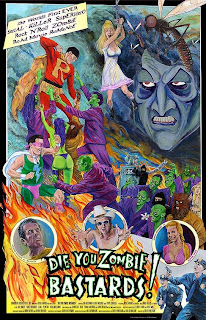 Die You Zombie Bastards! is as good-natured as it is bonkers. The gore is hilariously over-the-top and the nudity inoffensive, the characters likeable and the humour effective, plus it has a corking soundtrack on which almost every song seems to have the same title as the film. My favourite moment, which demonstrates the creativity behind the cheesiness, is when the film ‘breaks’ and is briefly replaced by a 1960s Mexican version of the story, in which ‘Super-Red’ is partnered by a sidekick named Kid Fantastico (Doug Williams). The Kid later turns up in Nefarious’ lair, much to Red’s surprise as he has never heard of him. Although the ‘unwanted superhero sidekick’ gag has already been done on The Incredibles, it is handled differently here and works brilliantly.

Speaking of zombies, there are zombies in this film, all green-skinned slaves of Baron Nefarious (who has the most extraordinary nipple-stretching scene), trying to prevent Red from rescuing his lady love. Oh, and at the end there are some intergalactic giant mosquito warlords. Or something.

Anyway, here is where Die You Zombie Bastards! came from - and it’s a little complicated so take notes because there will be a test later. Back in 1995, Caleb Emerson made a five-minute, shot-on-video comedy horror short about loving cannibals Red and Violet Toole (played then, as now, by Gerstmar and Zoreoza). It was called Red’s Breakfast and it was evidently quite well received, to the extent that two years later he followed it with a 13-minute sequel, Red’s Breakfast II: Dawn of the Red, which was shot on film. 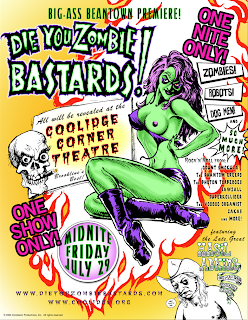 Dawn of the Red was shown at the Tromadance festival and was even included on a Best of Tromadance compilation tape. Emerson then completed the trilogy with Red’s Breakfast III: Die You Zombie Bastards! which was also shot on film and ran a whopping 23 minutes. This was ‘narrated’ by Hasil Adkins although maybe he wasn’t quite so incoherent in those days.

In 2001, the three shorts were released on one tape as The Red’s Breakfast Experience, including a new edit of Part I, a Director’s Cut of Part II and a bunch of behind the scenes footage. And a few years after that, the third film was remade at feature length - and here it is.

Die You Zombie Bastards! is good, silly fun, the sort of cannibal film that has somebody else’s tongue planted firmly in its cheek. At the moment it seems to be unavailable but Odeon Entertainment will be releasing it in the UK shortly.